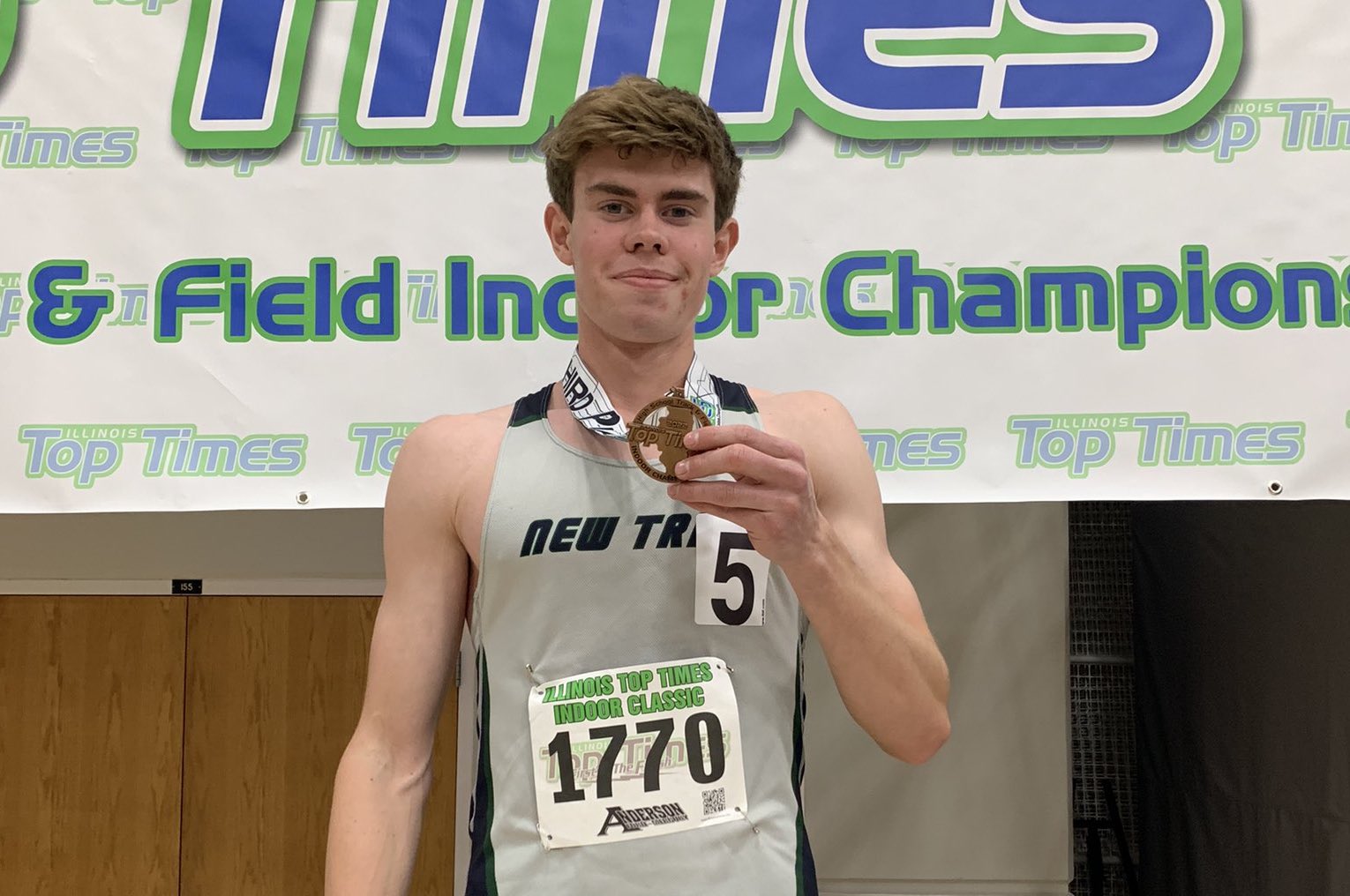 Ronan O'Neill with a medal from the Illinois Top Times meet in March. | Photo Submitted

Ronan O’Neill is in his first season running track and competes in the 200- and 400-meter runs — and in relays — for the Trevians. He will run for Villanova University next year. O’Neill was also an All-Sectional defender on the New Trier soccer team.

1. Do you have any prerace rituals or superstitions?

Definitely bring my headphone before I race. When I warm up before meets, I listen to music. I pack a lunch with me and eat three hours before I race.

I kind of wanted to get out of the Midwest so East Coast seemed like a great place for me. Villanova is around 7,000 (students); it was a bit bigger than New Trier but not too big. And academically it was exactly what I was looking for.

I am hoping to major in economics. I am taking AP economics at New Trier and am enjoying it. I feel that it’s a field where you can go down a lot of different pathways.

4. How did you get into track?

My New Trier soccer season ended in October this year. I was kind of in between paying club soccer, usually pick it up after the school season, but a bunch of friends were running track. It seemed like something I would be good at.

5. How did you wind up running for Villanova?

I had Villanova chosen before running track. My thing behind it was to find a school I would like outside of athletics and then once I find that I will look into athletics. I reached out to Villanova (about the track team) and was updating them with my times. It happened quicker than anticipated. I went out on official visit two weeks ago. And it was really, really enjoyable.

6. What do you do when you’re not competing?

I definitely like hanging out with my friends and playing golf. Especially in the summer I love to play golf with dad and my friends.

Probably consultant, I love traveling. Ideally something to do with technology, computers.

Definitely a Gatorade, definitely blue, and a protein bar.

A lot of people probably don’t know I have an Irish passport and my dad grew up in Ireland and all my cousins live there, so I travel a lot.

10. What do you and the team hope to accomplish this season?

Individually, I certainly want to be running at the state meet. As a team, we obviously have some good relays with the (4-by-100, 4-by-200 and 4-by-400). As a group, if we could get those also in the state meet, that’s something, we’ll try to make happen. We have a lot of guys on the team that are willing to do the extra work to make that happen.