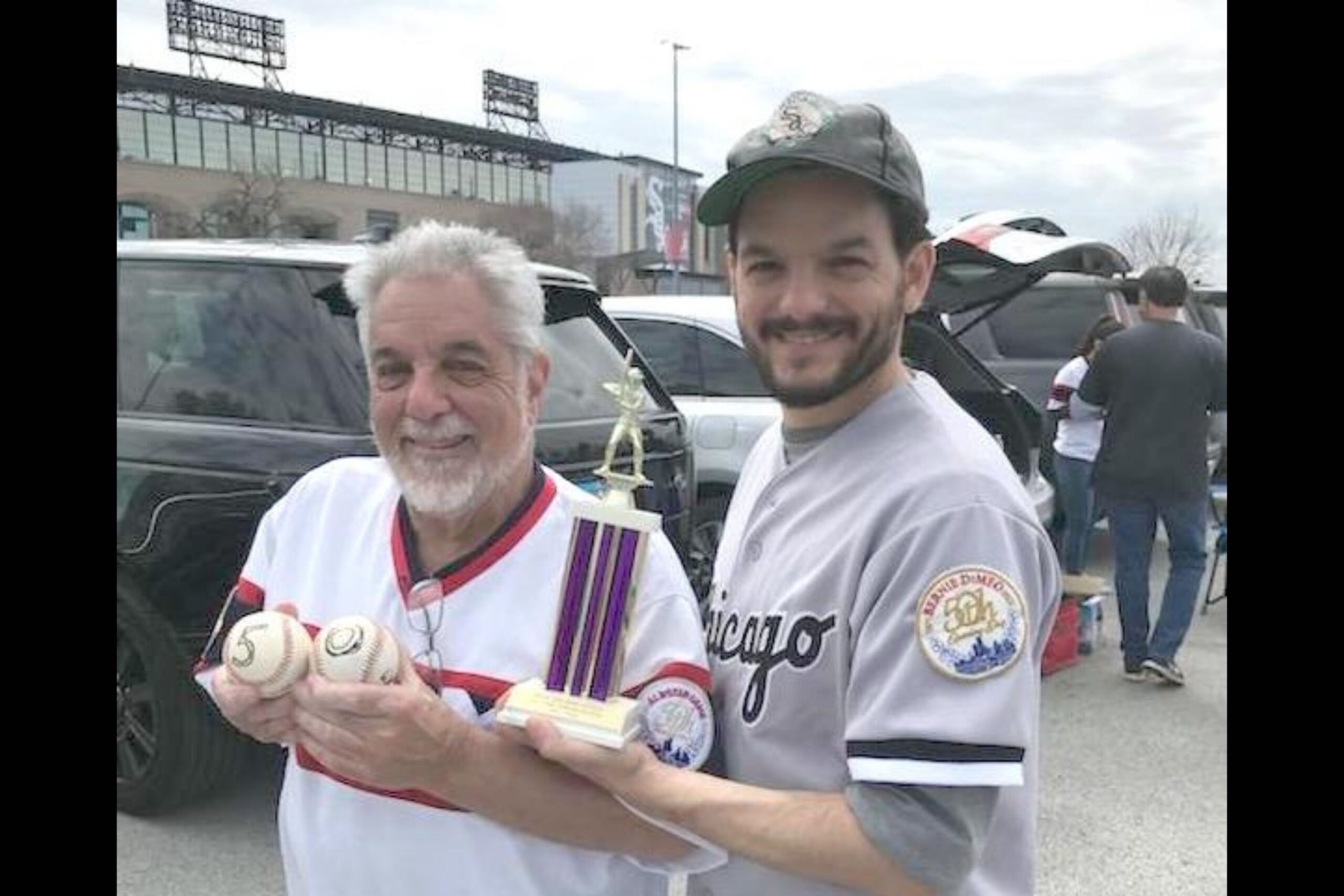 Receiving a trophy from his father was a special childhood moment for Danny DiMeo. Two decades later, Danny was honored to return the favor.

On April 12, Wilmette resident Bernie DiMeo celebrated his 50th consecutive year of attending the home opener of the Chicago White Sox. To memorialize the occasion, his son Danny surprised him with a repurposed little-league baseball trophy and a custom jersey patch, as the two joined family and friends for a celebration at the South Side ballpark.

“That was a really cool thing for him to do,” Bernie said. “I was totally surprised.”

Maybe he should have expected the fanfare, seeing as White Sox enthusiasm is a generational marker for the DiMeos — despite their North Side lineage.

Bernie grew up watching his favorite player, Nellie Fox, with his father and uncle in a two-flat in Rogers Park. The South Siders won the American League pennant in 1959, cementing Bernie DiMeo’s infatuation with the franchise.

Each season, Bernie took in ballgames at Comiskey Park. Then, he was off to college at Southern Illinois University in Carbondale, where he roomed with Rich Gossage (not the Hall of Fame pitcher more commonly known as “Goose”), another huge White Sox fan.

Rich graduated first and went to the team’s home opener in 1971.

“He always had one year on me consecutively and would always razz me about it,” Bernie said of Rich.

In ’72, the two began attending the Chicago opener together. It was Dick Allen’s debut at Comiskey Park, and the Sox won in a rout, 14-0.

DiMeo, Gossage and a group of friends took on the Sox home opener and plenty of memories for years. DiMeo remembers when fans received Whiffle balls as a giveaway in 1976 and they all ended up on the field after a controversial umpire decision. In 1981, the crew watched Carlton Fisk hit a grand slam to key a 9-3 victory in the star’s White Sox home debut. The home opener of 2006 may have been the most special as the White Sox recognized their 2005 World Series title.

“For a while no matter what — I was younger and a huge White Sox fan — I wanted to go to opening day,” DiMeo said. “The group kind of died off. Not actually died; people left and not everyone went, but I always wanted to go.”

The fandom wasn’t contained to Comiskey. It was ever-present in the Bernie and Laura DiMeo’s Wilmette home, making White Sox fans out of their sons: Michael, Tony and Danny. The north-side love for the Chicago Cubs dominated Wilmette, but it only made the DiMeos’ South Side passion stronger.

Some of Danny’s favorite memories center on the White Sox: skipping school for a ball game, catching a foul ball, having his first sip of beer (year of incident not disclosed) and waking up to catch the thrilling conclusion of a game.

“The Sox were a sign of summer,” he said. “They were always on in the background or the foreground as we were winding down for the evening. When I was little, maybe 6 or 7 on, if there was a good game on at night and it was past my bedtime, (my dad) would come wake me up to watch the end. It’s something we didn’t tell my mom.”

After a while, Gossage had to stop going to the openers, too, when his work took him out of the country. But DiMeo wasn’t going to stop after he hit 40 straight openers. He had to get to 50.

Now there, Bernie feels a weight off his shoulders. While he isn’t sure about future attendance, there were some close calls over the past half-century. One year, Bernie and friends withstood a four-hour rain delay while on the concourse, only to have the game canceled. Despite a professional conflict, Bernie returned the next day for five innings — an official game.

Then, there was the pandemic year. Fans were not allowed into the stadium when baseball resumed in the summer of 2021.

“We didn’t count that,” Bernie said.

Helping him down the home stretch to 50 was Danny, who has now been going to the openers for the better part of a decade.

Danny attended his first White Sox game at about 2 weeks old; he has a photo of former Sox player Greg Walker holding him to prove it. Will he be able to get to 50? He doesn’t think so, but he left the door open.

“It’s hard to imagine, really tough to imagine,” Danny said. “ … Maybe there’s enough overlap to try to keep it going. I got lucky this year…I do have a willingness to go regardless of what the weather is.”