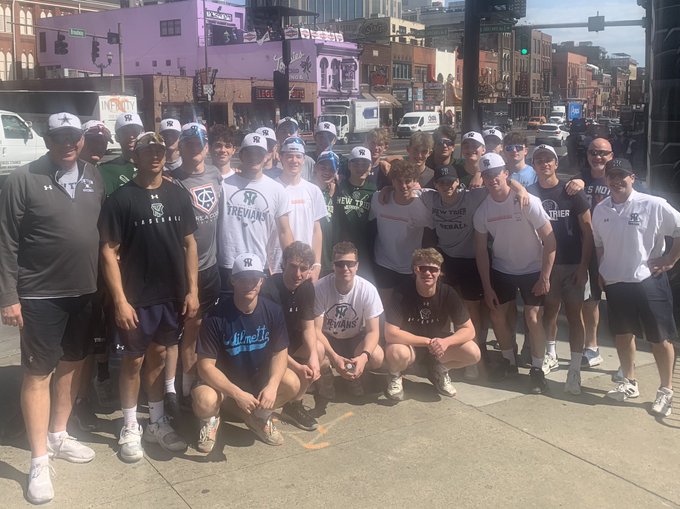 Graham Mastros hit a home run and tallied four RBI to lead the Trevians to the nonconference victory on Thursday, April 7.

Oliver Barcal struck out eight over five innings to collect the win for New Trier (2-6).

Michael Southard homered twice for the host Ramblers (6-1) in the loss on Thursday, April 7, in Glenview.

Gael Urbieta singled and doubled in the Ramblers’ darkness-shortened victory on Tuesday, April 5.

Connor Lasch racked up three hits to lead the Ramblers to a nonconference victory Monday, April 4.

Dylan Mayer socked a grand slam as the Trevians picked up their first win of the season Friday, April 1.

Connor Lasch and Gael Urbieta hit a home run each while Michael Clarkson had two doubles for the Ramblers in the league win Friday, April 1.

The Trevians and Giants battled to a tie on a cold day Thursday, April 7, in Winnetka.

The Ramblers were outslugged by visiting Lane Tech on Thursday, April 7, in Glenview.

The Trevians fell to the visiting Bison on Wednesday, April 6, in Winnetka.

Ella Grillo racked up 6 RBI with her two hits to lead the Pantehrs to the league win Wednesday, April 6.

McKenzie Johnson earned the victory on the mound while adding a double and triple at the plate for Regina.

The Ramblers fell in dramatic fashion on the road Tuesday, April 5, in New Lenox.

The visiting Warriors scored four unanswered goals to topple the Trevians in a league crossover matchup on Thursday, April 7, in Northfield.

The Ramblers picked up a league win Wednesday, April 6, in Wilmette.

Liz Marquardt found the net off a pass from Josie Noble as the Trevians (3-1-2) picked up a draw in conference action Tuesday, April 5.

Charlotte Dellin scored late in the second half to lead the Trevians to victory Saturday, April 2, in the final game of a road trip to St. Louis.

Payton Olszewski scored for the Panthers in the nonconference loss Saturday, April 2.

Mark Gonzalez finished with 5 kills and 3 blocks to help the visiting Ramblers to a nonconference victory on Monday, April 4, in Skokie.

The host Ramblers moved to 4-0 with the victory Tuesday, April 5, in Glenview.

The Ramblers picked up a Catholic League victory Wednesday, April 6.

The Ramblers were edged by the Friars Monday, April 4.

The Wildkits upended the Trevians in a rivalry tilt Thursday, April 7.

Tamia Quach won the 200 (31.7) and was also part of the three winning relays for Regina.