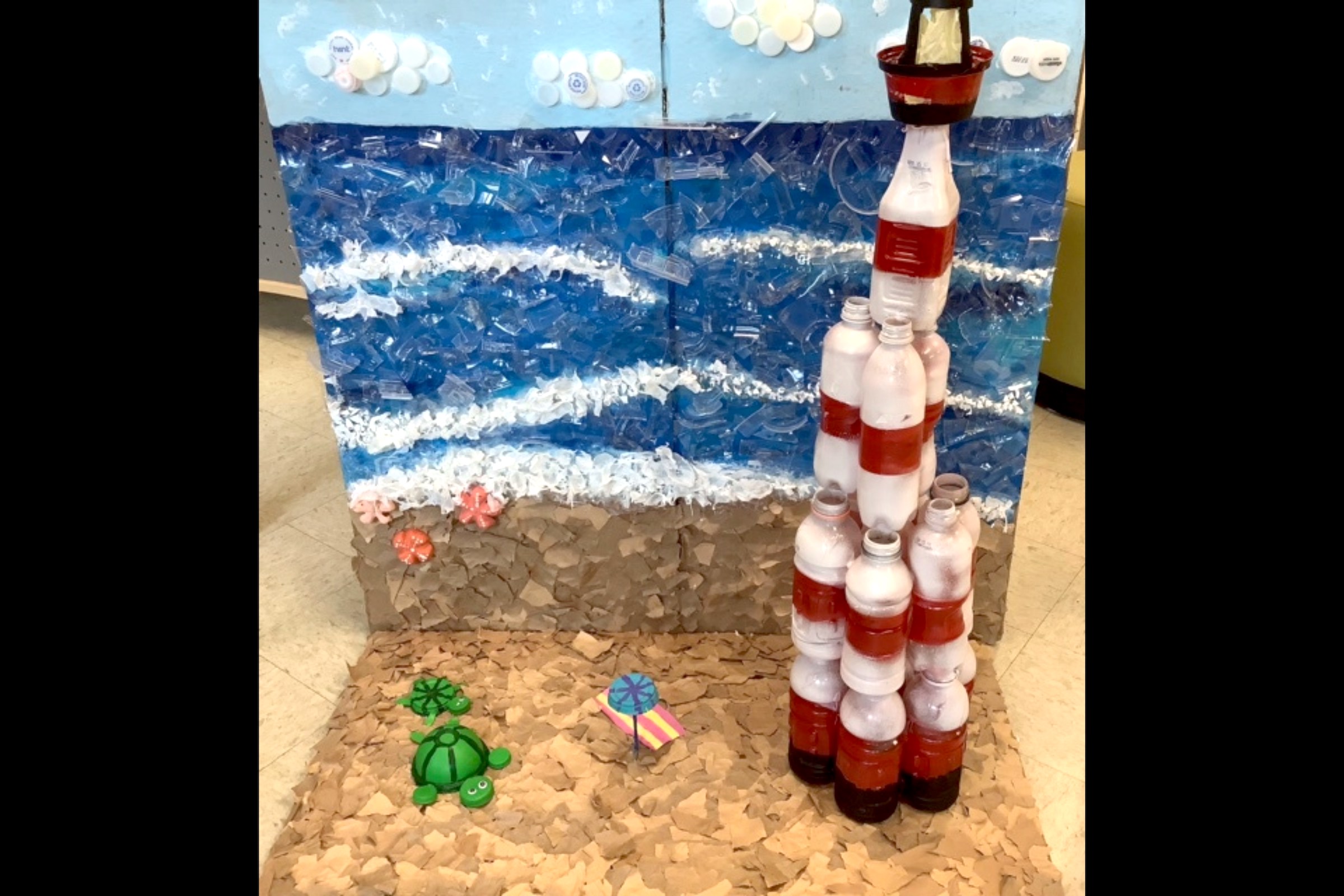 Winnetka students created a piece of art out of garbage found at Skokie Lagoons. | Photo submitted

Students aren’t always interested in giving themselves more work, but making a turtle out of trash seemed too simple for Winnetka seventh-graders Elise Boerjesson and Lucy Patterson.

To really make a statement, Elise, Lucy and nine other Carleton Washburne School students thought it best to create an entire beach scene.

The result is a piece of art — complete with a lighthouse, sand, ocean, clouds and, yes, a turtle — made from recyclable material and trash found at Skokie Lagoons

The statue is on display at the school, but it will soon move to the Winnetka Community House, where from April 4-May 4 it will raise awareness and funds to combat climate change. The students are directing donations to #TeamSeas, a nonprofit that removes trash from oceans across the world.

The student team chose the Community House, 620 Lincoln Ave. in Winnetka, at the right time.

“We wanted it in a public place for people to see and donate,” Lucy said. “We thought the community house was a good place. They have a theater show coming up. If we would put it up during it, more people would see and donate.”

The project united Winnetka seventh- and eighth-graders who are in the same “team” at the school. Each group of students had to tackle a unique problem within the larger topic of climate change.

Along the way, the team learned about the issue.

“When recyclables go into the trash, they create CO2 emissions when they get decomposed,” Elise said. “We found (the issue) really important.”

The team collected all the trash they could find and got to work. They used plastic bottles to create the centerpiece, a red-and-white lighthouse. The sand was made from cut up paper bags, and the waves from ripped plastic bags. The clouds are bottle caps. The students also cut off the bottom of some of the bottles and used the star-like remains to create colorful sea stars. To help the ocean shimmer, pieces of the transparent trash are glued to the backdrop.

Lucy and Elise also really like the beach towel with umbrella made from paper and another bottle bottom.

Through the project, the girls said the entire team also learned about marketing — such as pitching the story to a local news outlet — and public speaking and presenting.

At the community house, the statue will be flanked by two posterboards that explain the project and provide details on climate change and how to donate to #TeamSeas.