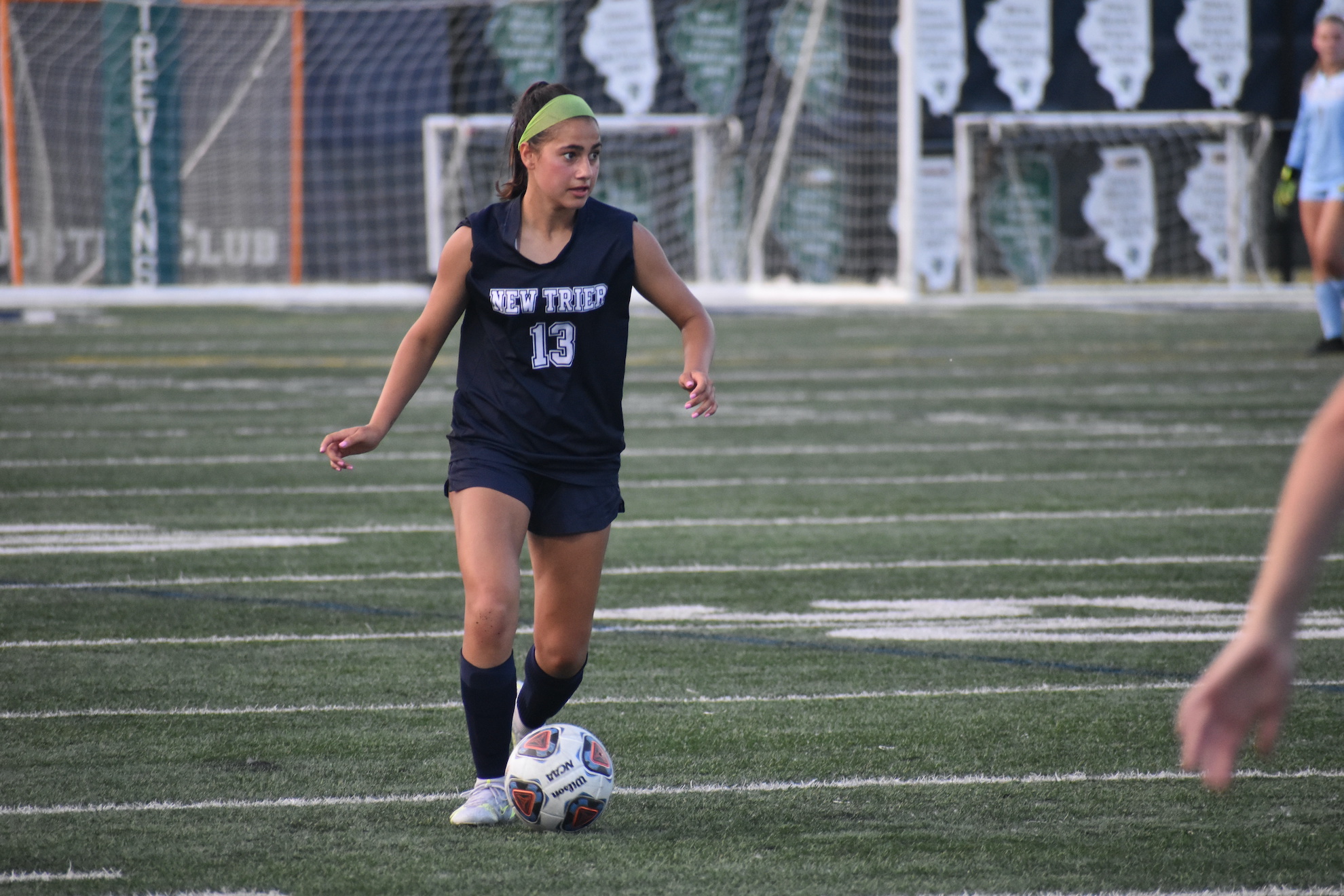 Ava Shah, now a senior, looks for options during a 2021 playoff game for the Trevians. | The Record File Photo

As a drizzle evolved into a moderate rainfall Wednesday, March 23, the New Trier girls soccer game became more and more in jeopardy.

Coaches and officials analyzed radar readings, and parents and fans amassed under the concession pavilion. The Trevians players, however, didn’t know what was going on.

They were too immersed in their pregame routine: dancing like maniacs in an equipment shed.

“You can hear it now. Everyone is dancing their hearts out,” senior Ava Shah said. “Everyone is being themselves and everyone’s fun and quirky personality is showing through. … Once we come to practice and get together we are one big family. That’s what I love about it.”

The “it” is New Trier girls soccer culture, an important contributor to the program’s success that includes seven straight sectional championships — and 15 in the last 18 seasons.

Shah and fellow senior Kendall Sierens said the culture will take on an even bigger role this season, as the Trevians integrate a slew of new players not only to the roster but also to the starting lineup.

New Trier (2-0-1) is three games into the season, and coach Jim Burnside said in the early-going the team is starting three seniors, three juniors, three sophomores and two freshmen, including goalkeeper Caroline Hague — “That doesn’t happen at New Trier too often,” he said.

“We graduated nine (from last year’s team). A lot of these girls have seen minutes but not a lot have seen significant minutes,” Burnside said. “The key is we’re learning and we’re learning pretty fast.

“It’s a great, athletic group. I hope this will be one of the biggest growth experiences we’ve seen.”

The new-look Trevians began the season with a 1-1 draw against Warren on March 15, followed by a 2-1 win over Prospect on March 17, thanks to goals from Josie Noble and Nora Westol. Two days later, March 19, Sierens, junior Sofia Palmer, sophomore Clara Deliduka and sophomore Charlotte Dellin tallied a goal apiece in a 4-1 win over Palatine. Wednesday’s game against St. Ignatius was canceled.

Sierens is happy with the team’s start and thinks they are where they need to be early in the season.

“We’re really just trying to focus on incorporating new people in everything and getting everybody understanding our system,” she said. “It’s been great. I feel like we’re becoming one as a team.”

A Denison College commit, Sierens will lead the offensive attack, along with Liz Marquardt and Noble, among others. Shah and Dellin highlight the Trevs defensive backfield.

Both Sierens and Shah said they want to be leaders by example at their respective positions.

“I went through the whole program with amazing role models and now I have to be a role model for other soccer payers and encourage everyone to step up,” Shah said.

With new players and old players in new spots, Burnside said the team has to learn to play as a unit.

That means smart, possessing soccer that limits the time the opponent touches the ball.

“We need to play as 11 players,” he said. “We talk to the kids a lot about if you play as 11 — really as 11 — you really equal 13, as opposed to a team of 11 that doesn’t really play together. You can sort of leverage your team and your effort by being a cohesive bunch. That’s the key.”

New Trier will travel to St. Louis over spring break, playing a game on April 1 and another April 2. Conference play begins when the Trevs return with a home game against Maine South on April 5.

While New Trier won a sectional last season, it did not reach the state finals for the first time since 2013.

Sierens believes the Trevians can get back there, but that is not the only goal.

“It’s sticking to our culture, rebuilding and just having fun. That’s really what we’re about,” she said. “We have a lot of small goals, but we want to win and compete, and always at end of season (the goal) is to win state. But that’s an outcome goal. So we’re just trying to do our best and compete. If that comes together, we will succeed.”