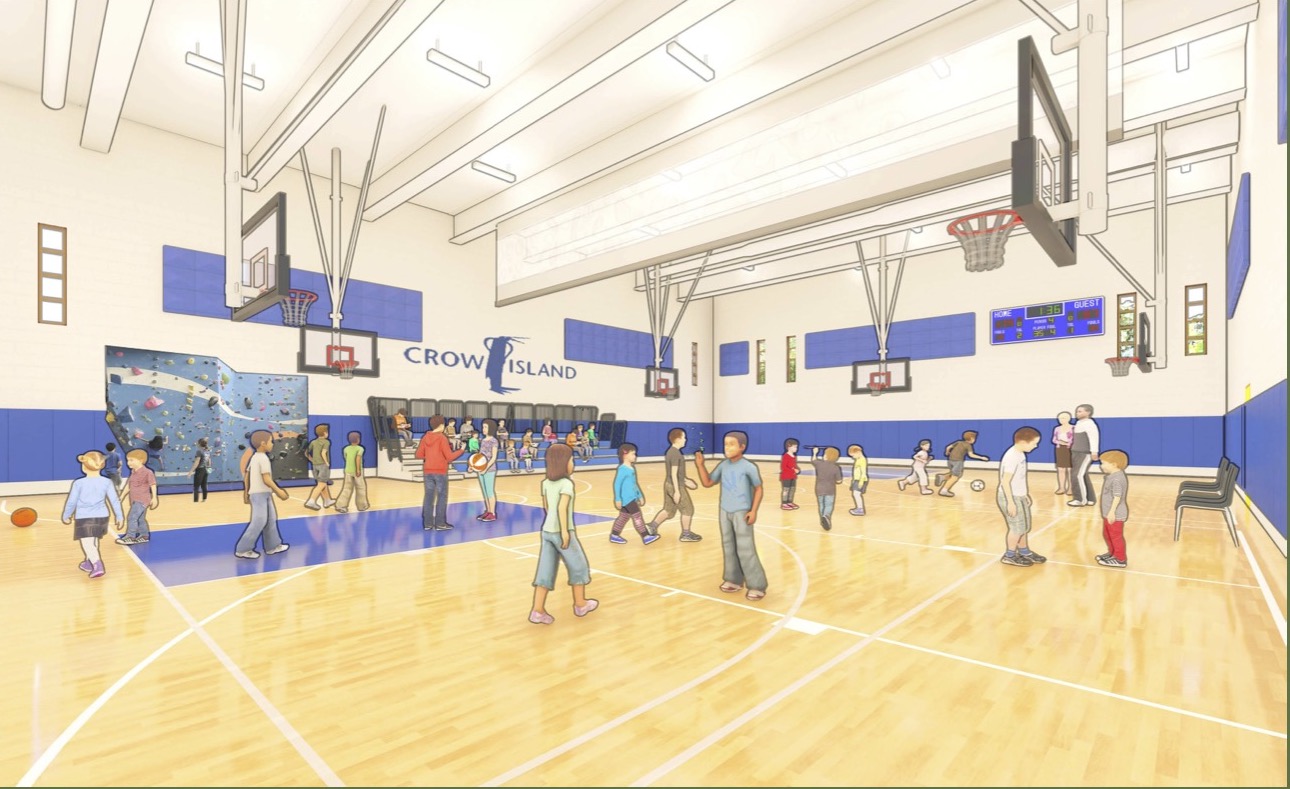 A rendering of a new gymnasium for Crow Island School that is part of a $68 million improvement project for Winnetka Public Schools. | Image from District 36 Presentation

In the wake of a failed try three years ago, Winnetka Public Schools officials are again testing the referendum waters.

The district’s “downsized capital improvement proposal” reportedly focuses on improving current spaces rather than adding new ones, one of a handful of lessons the district says it learned from three years ago.

“(The 2019 referendum) was too big, too expensive and too complicated,” says Emily Rose, the D36 School Board vice president in a digital presentation.  “ … Our community wants us to fix existing facilities, improve our current spaces and do not just add on additions and consolidate schools without an educational benefit.”

The district sent a letter to district residents in early February to kick off the outreach campaign, which so far has included a narrated presentation online, a dedicated webpage and an appearance in front of the Winnetka Village Council on Tuesday, March 15.

A timeline supplied by District 36 says feedback on the proposal will be collected through March and then analyzed in April and May. The district expects to pass a recommendation on whether to move forward with a November referendum this summer.

The improvement project is actually expected to cost $68.38 million; however, the district plans to pull $9 million from reserves. It is hoping to ask the voters to approve $59.4 million in bond purchases to fund the remainder of the proposal.

School officials project if balloted and passed the referendum would add about $832 to the annual property-tax bill of a home valued at $1 million. The estimated increase is $520 less than the 2019 projection of $1,300, but at the time in 2019, the district marketed the increase as only $276 per $1 million home, not taking into account evaporating debt. District 36 has since paid off bond obligations from 2017 and is currently debt-free.

In 2019, 61 percent, or $55.14 million, of the requested funding supported additions and renovations, while this time around just 27 percent, or $18.17 million, would fund them, according to numbers provided by the district. The rest will go toward maintenance, repairs and “critical upgrades.”

Highlights of the plan include infrastructure improvements (HVAC, fire safety, electrical, etc.) at all five schools; new security entryways at four of the schools; new multipurpose spaces for Crow Island and Hubbard Woods schools; and a new library and new gymnasium for Crow Island.

Click here for a complete breakdown of the proposal.

All five schools will receive at least $8.3 million in renovations — led by Crow Island at about $23 million. According to the district’s presentation, “there has been no investment in a long time” at Crow Island Elementary School, which is designated as a historic landmark by the U.S. Department of the Interior.

Another major change from 2019, the new proposal does not include the closing of Skokie School, which is celebrating its centennial this year. Skokie Middle School (fifth- and sixth-graders) and Carleton Washburne Junior High (seventh- and eighth-graders share an east-west boundary between Elm and Oak Streets and some resources.

“The idea of closing Skokie School was not popular, and merging grades in one school was not supported by our community,” Rose says in the video.

In the three years since the failed referendum, District 36 has completed more than $14 million in renovations for what it calls critical upgrades, such as plumbing and roofing fixes and ADA compliance needs.

The district also ditched the architect involved with the 2019 referendum and is again partnering with Perkins and Will, and within the past year, the district organized a 23-person task force of community leaders who have analyzed funding proposals and made recommendations on the downsized proposal.