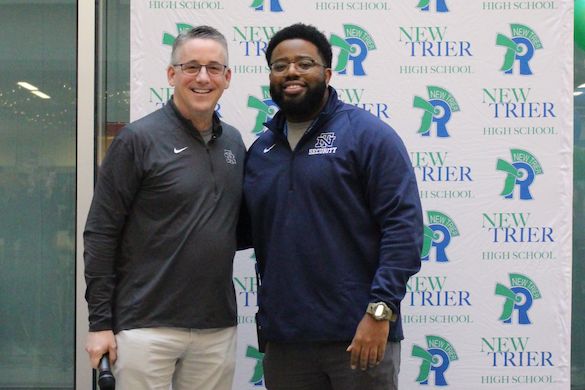 Dr. Paul Sally congratulates Johnyell Owens on receiving an award from the Illinois State Board of Education. | Photos submitted

New Trier High School staffers were recently selected as Those Who Excel by the Illinois State Board of Education.

Johnyell Owens, a security professional in the district and a U.S. Navy veteran, received was honored in the Educational Service Personnel category, for his efforts as sponsor of New Trier’s African American community club and his position as a security staffer.

According to a school press release, Owens “often partners with district administration to offer perspective and experience in how the school can be a better place for all students and staff.”

“Johnyell is a role model for our students, and he also is a valued, important voice in our district’s equity efforts,” New Trier Superintendent Dr. Paul Sally said in the release. “He has built important relationships with students, staff members, and parents with his warm, welcoming demeanor and his genuine care and concern for our students.”

For his efforts in coordinating COVID-19 response, Associate Superintendent Chris Johnson received a service award in the administrator category. Johnson organize a vaccination clinic at the school’s Northfield campus that served the community at-large, and he oversees the district’s finances and operations.

“Mr. Johnson’s commitment to care for those well beyond the walls of New Trier High School has made an immeasurable impact on what we have been able to accomplish within the walls of our schools,” New Trier Township’s six Elementary Superintendents wrote in a nomination letter to ISBE.

According to the press release school health professionals put in long hours in response to the pandemic and coordinated constantly with the Cook County Department of Public Health to share timely, accurate information.

“When county and other local authorities were unable to do contact tracing in a timely manner, the nurses stepped in and took this on,” wrote primary care pediatrician Dr. Rachel Goodman, who served on New Trier’s Reopening Advisory Board with Health Services Coordinator Anne Marie Ricchio. “She and her staff work well as a team. No matter whom I hear from in the department, I get the same level of excellence.”

Collins raised more than $15,000 through a virtual event during the pandemic.

“Christina is committed to giving all children the chance to live life to the fullest by accelerating the search for a cure and better treatments,” said Nikki Perryman, director of strategic operations and co-chair of the Childhood Cancer Impact initiative. “She exemplifies a servant leader, and her passion for giving back reaffirms we are in the business of making a difference in people’s lives.”

The firm will donate $1,000 to ALSF in appreciation of Collins’ efforts.

Tickets to the performances, which are two hours each, are $10 and can be purchased online and at the door.

According to a press release from New Trier, “Puffs” is presented with Concord Theatricals on behalf of Samuel French.

In the play, at a “famous Wizard School, a group of young wizards embark on an adventure as they learn magic and the power of friendship. Three potential heroes fight to survive magic school with the help of their friends, the loyal underdogs known as the Puffs.”

“Puffs has two of my favorite things: big bold characters and a focus on ensemble,” said Laura Wesslund, the show’s director. “Students onstage and off get to create imaginative characters and build a unique wizarding world. I’ve enjoyed collaborating with a hardworking team of students and staff to bring this creative story to life onstage. I hope our quirky wizard adventure brings audiences some healing laughter and much needed respite from our challenging times.”