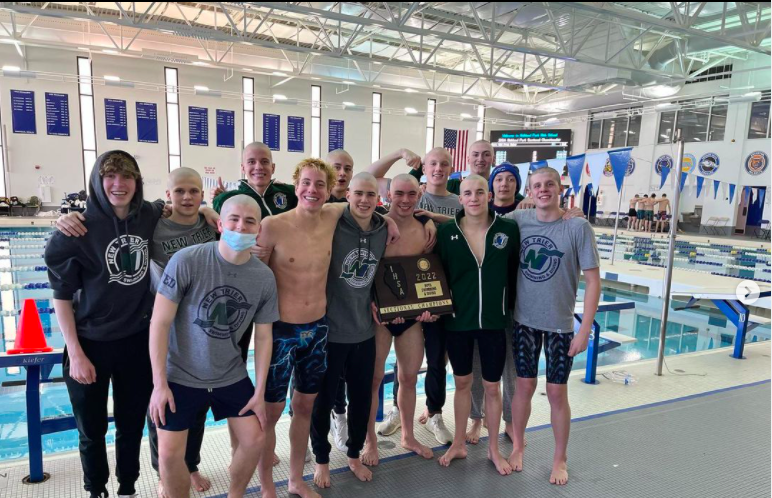 Aiden Musick, a sophomore, won two individual races (100-yard butterfly, 200 freestyle) and was part of the winning 400 free relay for New Trier as the Trevs won the sectional Saturday, Feb. 19, in Highland Park.

Lestina and Dienstag were joined by Connor Jones and Red Ricciardi in the first-place 200 medley relay, and Musick, Michael, Graham Wilson and Ward Wilson joined forces to win the 400 free relay.

Lachlan Andrew joined Kelly on all three winning relays and earned a second-place finish and a state berth in the 50 free (21.30 seconds). Also qualifying for the state championships are Ramblers Jimmy Dukes in the 200 individual medley and 200 free relay, PJ Spagnolo in all three relays, Demetri Zemenides in the 400 free relay, and Max Rice in the 200 medley relay.

Shannon Burgert, a New Trier senior, maintained a 190.6 average over 12 games in two days to finish 39th overall on Saturday, Feb. 19, at the Cherry Bowl in Rockford.

Maria Morabito, a New Trier senior, scored a 9.4 on the vault to finish 12th overall on Day 1 of the finals Friday, Feb. 18. She also competed in the floor exercise and tallied an 8.975, good enough for 21st overall.

The Trevians started the postseason with a victory in their host regional Wednesday, Feb. 23, in Northfield.

The sixth-seeded Ramblers dropped their playoff opener to the 10th-seeded Cougars on Wednesday, Feb. 23, in the New Trier High School Regional.

The Ramblers earned the victory in the sectional semifinal Tuesday, Feb. 22, and collected their 30th win — versus three losses — on the season.

Vattman Park bursts with color and life during Holi celebration

Championship Saturday for Trevians: New Trier girls and boys are off to state after sectional victories

Both the boys and girls squads punched their tickets to the state finals with victories in their sectional finales Saturday, May 14,…