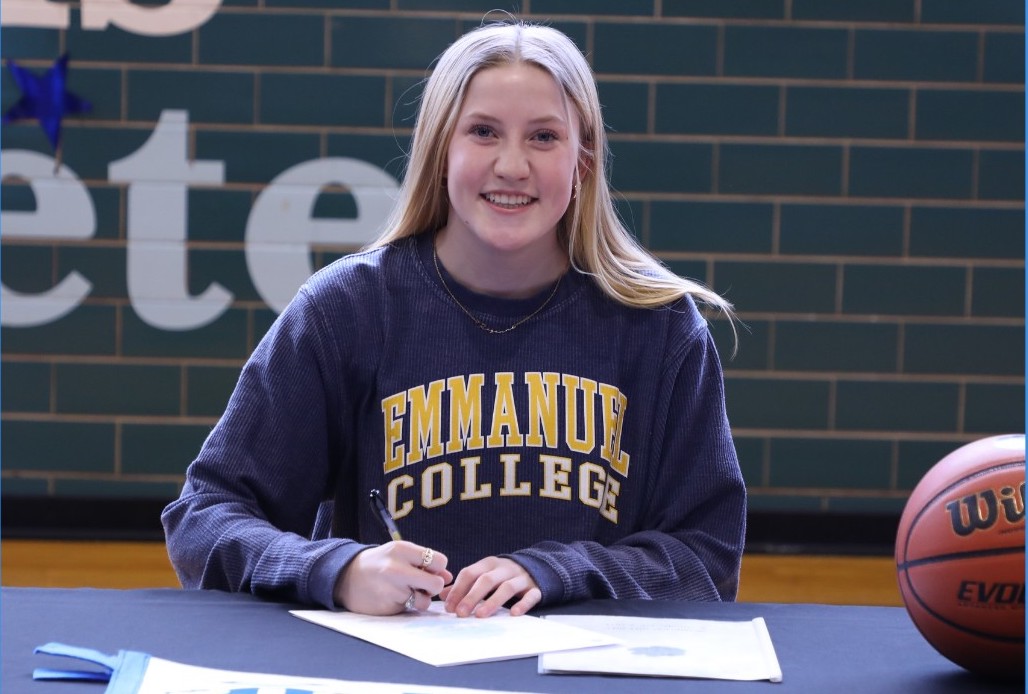 Reganne French is celebrated on National Signing Day for her commitment to Emmanuel College. | Photo Submitted

Reganne French is a four-year varsity forward for the Panthers who has her team to a sectional-title game for the first time in nine years. French also was a standout volleyball player for Regina.

Before every game we do a team prayer and I always hit the back of my right heel after we do the sign of the cross. I also always tuck one of my shoelace loops into the rest of the loops on my right foot.

I have actually committed to pay basketball at Emmanuel College in Boston. I really just like the city. I live in Chicago, so I like having the atmosphere of the city and having a lot to do. It’s a really strong basketball program and a really good fit. It’s a fast program and they do everything I like in basketball.

Most of my life revolves around basketball. Probably hanging out with my family, whether watching one of my other brothers in their sports or playing games with my parents. We compete in like every game of life.

I would like to do lacrosse. I think it looks really cool, and you just look cool playing. But I don’t think outdoor sports are for me. I don’t like that weather dictates everything. In basketball you know when you are going to have a game.

6. What is it about basketball?

I started playing when I was 5. My uncle wanted to coach a team but didn’t want to coach random kids so he made my mom sign me up. In fourth or fifth grade, I started started with my first travel team. I think that’s when I first fell in love with the sport and how you can contribute small things to help your team to a win. … It was like sixth grade when I stopped other sports and grew my love for the game.

7. If you’re in Walgreens and you have a couple bucks, what are you buying?

Those Sweet Tart Rope things. Those are so good.

I would buy my mom a new car, because she said if one of her kids get famous they have to get her a car. Or my dad, but probably my mom because she is more persistent about that wish.

I have toe thumbs. That’s weird, but I feel like people kind of know that. I talk about that a little too much.  Also, I am a little bit introverted even though it doesn’t seem like that when people meet me. I like my alone time.

10. What has been the key to Regina’s success this season?

Going into this season, I was a little shaky and kind of apprehensive. Everyone I have played with in the program had graduated … but I think the team has really come together as actual friends, which I’ve never really experienced. … It really shows on the court. We want the best for each other in that way. There’s no selfish play. You really see it on the court as opposed to other teams that might not be as close.