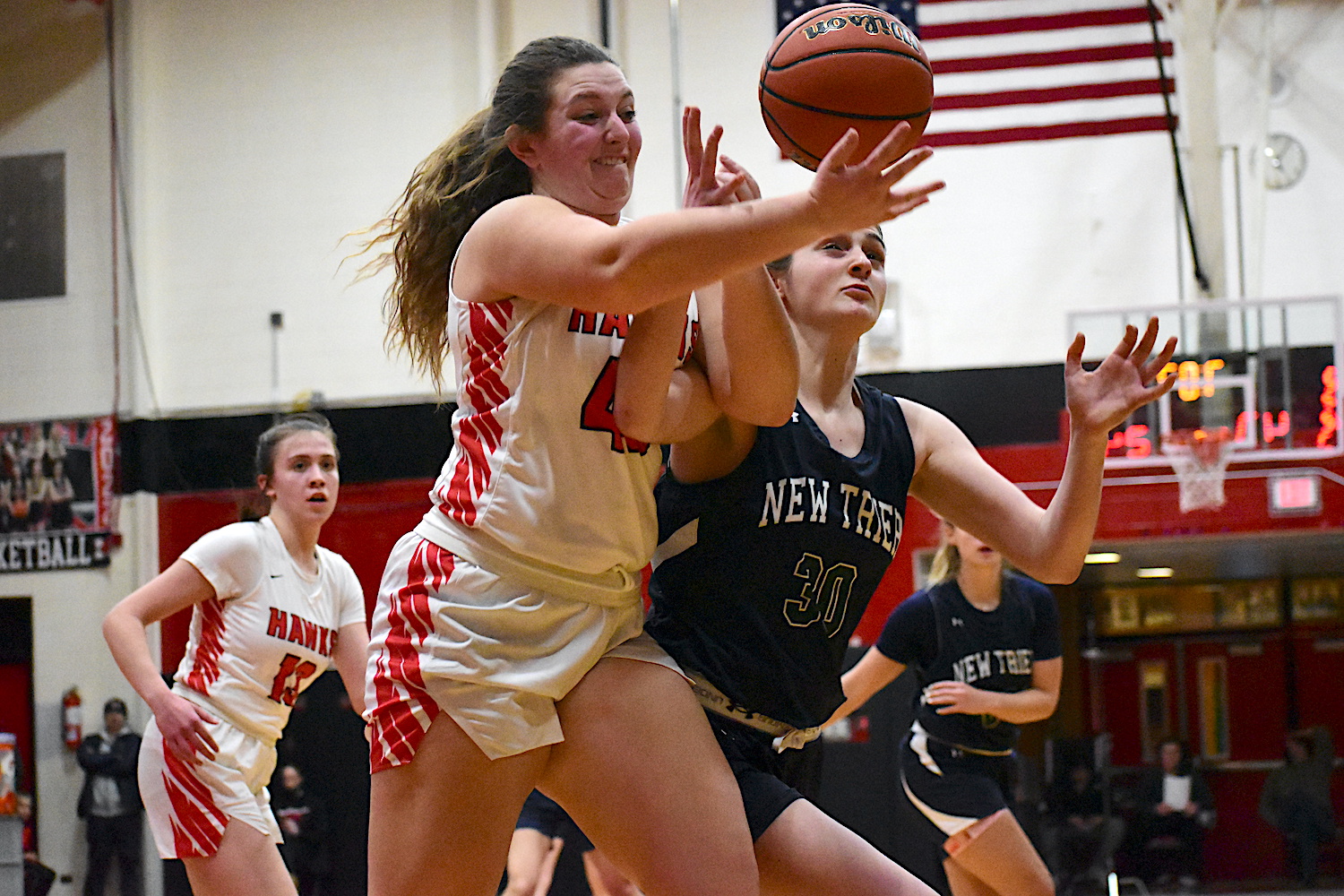 A winter storm howled outside Maine South’s gymnasium on Thursday night, but inside the gymnasium there was plenty of heat.

Unfortunately for New Trier, the warmth only covered one end of the court.

“When we were scouting them, we were not expecting a three-point shooting team,” Trevians senior Casey Scharoff said. “Coming out and (Caroline Barker) hitting four threes in a row was a little stunning, and it was hard to recover from that point.”

Barker’s three-point barrage spearheaded a 29-point first quarter for the Hawks, the sectional’s No. 2 seed who rode the advantage to a 76-43 victory and a regional championship over No. 7 New Trier Thursday, Feb. 17, in Park Ridge.

“Nothing really broke down on our end. They played a great game,” she said. ” … They came out and hit the shots you have to hit in these kind of games. I don’t really feel like it was anything our kids did or did not do.”

Down 29-8 after just one quarter, the Trevians fought the good fight, never letting up in the face of defeat.

Scharoff, whose team-high 11 points all came after the first quarter, said it was a team effort to keep playing hard amid the large deficit.

“Every timeout, every water break, the whole bench was just hyping you up,” she said. ” … The energy coming from the bench, keeping your eyes off the scoreboard and playing with the girls you love— there was really nothing to lose. We just had to leave it all out there.”

The Trevs hung with Maine South in the second quarter and even outpaced them, 12-8, in the third quarter. At one point, New Trier cut the deficit to 19, but could not get it any closer.

Rodgers said at halftime she just told her team to “chip away” and could not have been prouder of the effort.

“They could have easily given up, but they didn’t,” Rodgers said about the effort. “They continued to fight and play hard.

“It’s been a tough year for us, but they’ve continued to fight and support each other. I’m really, really proud to be this group’s coach — really proud.”

New Trier finished the season 12-15 and 3-7 in the Central Suburban League South and missed two holiday tournaments because of COVID-19 concerns on its roster.

Seniors Abby Ryan and Scharoff were selected to the All-Conference team, and six other seniors will played their final high school game with them on Thursday evening.

“The thing I love about them is that they really love to play the game,” Rodgers said about the seniors. “They will go find an empty gym to play pick up. That’s been one of the joys in coaching them is just how much they love the game.”

The Trevians program pivots to the future, which was on display in the regional championship, as well. Junior Rachel Zacks scored 9 points and grabbed 3 rebounds, while sophomore Sela Klein was a problem all over the court, finishing with 9 points, 5 rebounds, a block and a steal.

Rodgers said thanks to the seniors, the underclassmen have bright futures.

“One of the things in you want in a program is great senior leadership and you want young kids following,” she said. “And that’s exactly what we have.”

Ramblers and Panthers dominate on way to regional titles

Loyola Academy, the top seed in the Glenbrook South Sectional, topped Maine West 50-21 to move to 27-3 on the season. The Ramblers will meet the winner of Glenbrook South and York, two teams that will play Friday, Feb. 18.

Reganne French scored a game-high 23 points to go with 4 rebounds and 5 steals for the Panthers, who are the second seed in their sectional. Maeve Gibbons chipped in 8 points and 5 rebounds, while Payton Olszewski tallied 7 points for Regina.