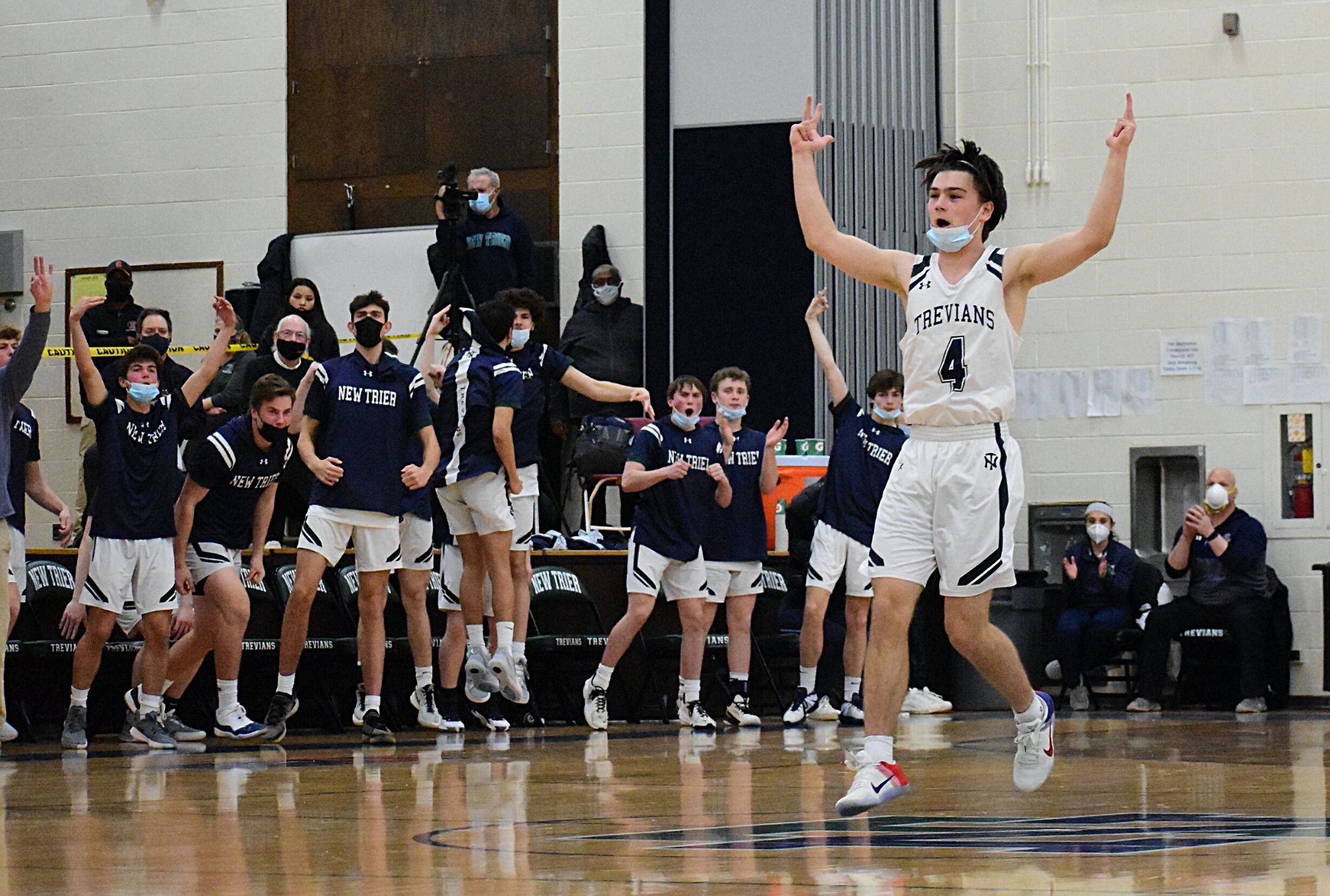 The New Trier-Evanston rivalry does not need any fuel for its fire, but it got it — courtesy of social media.

After the Wildkits upended the Trevians on Friday night, Feb. 4, the Evanston Athletics Twitter account posted a playful message about the rematch scheduled for Monday, Feb. 7: “Trevians called and want to run it back tomorrow in their gym … ” the tongue-in-cheek post reads.

But not everyone got the joke — including the heavy-hitting Chicagoland sports influencer, Sloche, who posted the tweet as fact to his 70,000 Instagram followers.

Already burning from Friday’s loss, the Trevians did not appreciate the slander — or the attention it attracted.

“When we lost (Friday), something just clicked,” New Trier senior Noah Shannon said. “And then they tweeted out something … and it really angered the whole team. And I was just like, ‘We gotta go out there and we cannot lose.'”

The irritation fed an aggressive performance from Shannon and the Trevians, who avenged Friday’s loss with a 55-38 whooping of the Wildkits in Northfield.

Shannon racked up 17 points, nine of which came in the decisive third quarter when New Trier outscored Evanston 18-4.

“I don’t think he felt he played well in that Friday night game and he played great for us tonight,” Trevians coach Scott Fricke said. “He was aggressive, he defended well. He’s a really good shooter and he knocked down shots tonight. And he’s confident, he took the ball to the hole and went up strong. He was great.”

Shannon said Evanston left him open on more than one occasion Friday, and he was ready to make them pay for it Monday, even if he was in a slump.

“I’ve been working on it the past month or so, just because it’s been feeling a bit off lately,” Shannon said of his jump shot. “I think the best way to get out of (a slump) is to get in the gym as much as I can. … It’s hard to have confidence when I’m in a slump, but I gotta have it.”

Shannon hit a three in the first quarter to help the Trevs get going. Munro also started hot, tallying 7 points and 4 rebounds in the opening period.

Evanston matched New Trier for much of the first half, but a Kirkpatrick three-pointer near halftime helped the Trevs to a 27-23 lead at the break.

Out of halftime, though, it was the Trevians defense that was the difference maker.

New Trier defended and rebounded, while Shannon and Jake Fiegen did damage on the other end, spearheading a 14-0 burst to start the third quarter. Evanston did not score until 5 minutes 38 seconds into the half and by then, the Trevians had an 18-point lead.

“It was about defense. We wanted to get stops and I think we got like seven stops in a row coming out of halftime,” Fricke said.

The Wildkits showed plenty of life in the fourth quarter, forcing five Trevians’ turnovers and trimming the lead. But it was too little too late. After going 6 of 16 from the free-throw line in Friday’s loss to Evanston, New Trier iced the game Monday with a 10-of-12 charity-stripe effort in the second half.

Munro was steady throughout and finished with a game-high 19 points, 11 rebounds and 3 blocks. Fiegen scored 7 points, and Kirkpatrick and Karlo Colak chipped in 5 apiece.

Monday’s matchup bore little resemblance to the teams’ Friday meeting at Northwestern University’s Welsh-Ryan Arena, when Evanston raced out to a 22-5 advantage.

New Trier fought back with a stunning 23-0 run to grab a halftime lead. But the ‘Kits stayed hot from the floor, shooting 65 percent (24 of 37) on the evening and outlasting the Trevians in the final quarter, according to a report published in the Evanston Roundtable.

“They are very talented,” Fricke said of Evanston. “They’ve got the pieces and they had been struggling making shots. Against us on Friday night, they made a lot of shots. When they are making shots, they are hard to guard.”

Fricke said his team should have been able to hold the lead it fought so hard to achieve on Friday night, but he downplayed the effect of the loss, saying “there are ups and downs in a season.” Before Friday, the Trevians had not lost since late December to Simeon in overtime.

“You are going to hit bumps in the road. It is hard to win very game,” he said.