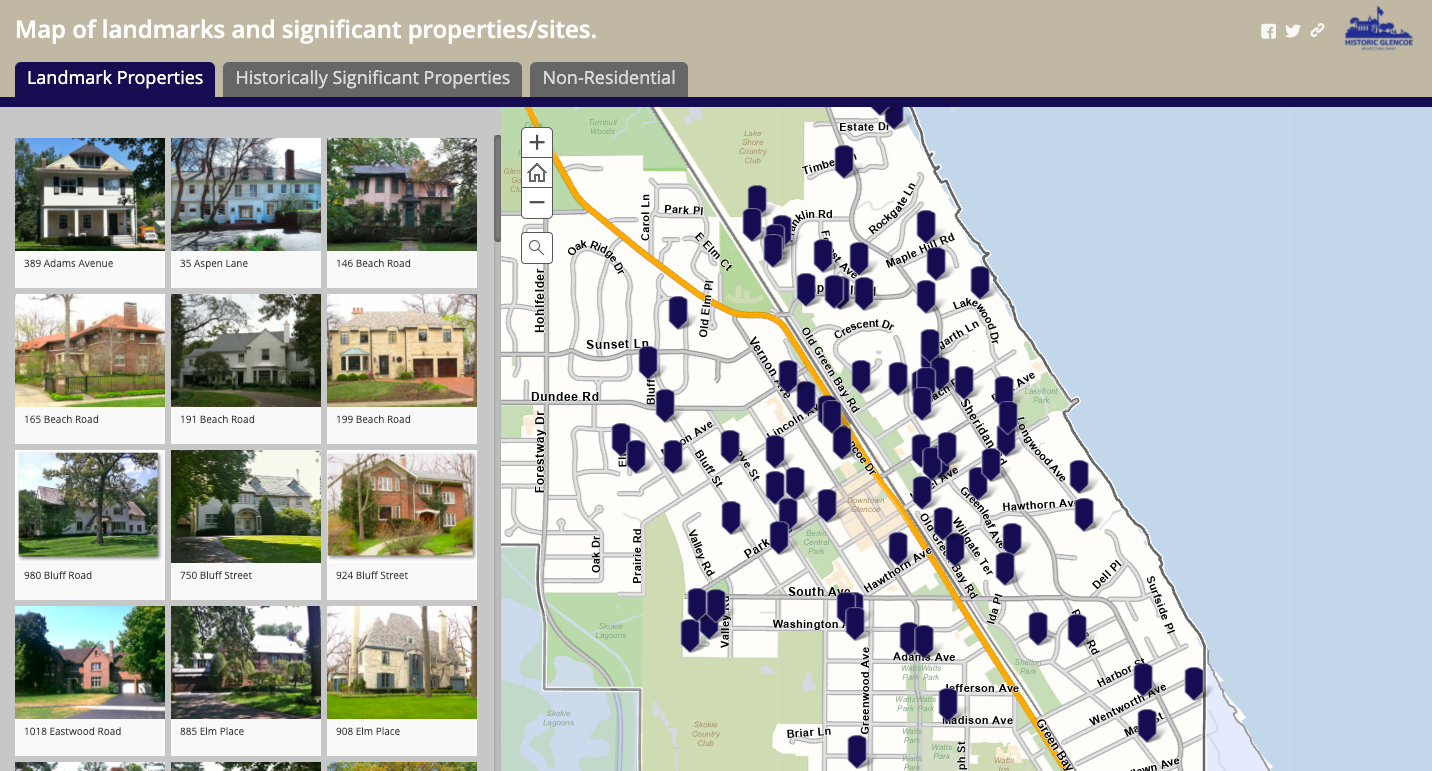 A map of historic landmarks designated by the Village of Glencoe.

Each year, more and more pieces of Glencoe history disappear, and village officials want to do something about it.

During a Committee of the Whole meeting Thursday, Jan. 20, the Village Board of Trustees continued a discussion on how to curtail the loss of historically recognized homes.

According to the village’s Historic Preservation Commission, 19 local landmarks and 68 historically “significant” homes — properties that have not applied for landmark status but were identified by local authorities — have been demolished since the year 2000.

“If you value something, whether it is an heirloom or a house, you take steps to save it,” said Peter Van Vechten, chairperson of the commission, to open the conversation.

Glencoe is not the first North Shore community to confront the teardown issue. Some of its neighbors have made steps in the recent past to encourage renovations over demolitions. The Village of Winnetka has called historic demolitions a “huge problem” and has worked to bolster its regulations.

Van Vechten said that Glencoe has 95 registered landmarks between two levels: certified (11) and honorary (84). The former of the two is more difficult to realize but comes with more protections. Van Vechten added that 224 Glencoe homes are designated “historically significant.

He said that Glencoe has the lowest share of “certified” landmarks among its local peers, but the highest percentage of new housing stock over the past 20 years.

“If we wait much longer, it won’t matter anymore. There won’t be anything left,” he said.

Building off a September 2021 conversation, Van Vechten presented the Village Board with a list of 20 recommendations that the commission feels may slow demolitions.

The suggestions were based on a review of similar processes and ordinances held by six nearby communities (Wilmette, Kenilworth, Highland Park, Lake Forest, Evanston and Winnetka).

On the ordinance side, the commission suggested eight edits to the rules allowing for a demolition, including mandatory attendance at public hearings for developers, increased detail in demolition applications, more communication to neighbors of the subject property, and a longer delay between permit and demolition.

Trustee Gary Ruben and others worried about the additional red tape that would not make a difference to developers.

“I’m concerned about some of these bits that create an extra hassle-factor, an extra monetary cost, but ultimately are not going to stop someone from selling their house to a developer who wants to bulldoze the property,” Ruben said. “It just means … the homeowner gets less money and we wind up at the same place.”

Ruben said he would like to see ideas that encourage maintaining or renovating historic homes.

Trustees also wanted to know if any of the proposed ideas had worked in other communities. Jordan Lester, who is the staff liaison to the commission, said that the Village of Kenilworth reported saving four homes in the recent past with a bolstered landmark process and that the Village of Glencoe will continue to seek other examples of successes.

Other ideas from the Historic Preservation Commission included increasing the demolition fees and limiting zoning-variance requests from developers who wish to raze a historic property.

The board was not ready to pledge allegiance to any of the recommendations as is, but Roin stood behind working quickly to take action.

“I think we should get ourselves to the point where we are doing something,” he said. “Whatever we do it’s not likely to ruin the town and I don’t think any of the proposals we made are going to be ruinous financially for anybody. The hope is that they’ll cause some developers to think, ‘Oh there’s another way.’”

The staff and commission are planning to meet again and bring more advanced ideas to a future meeting.