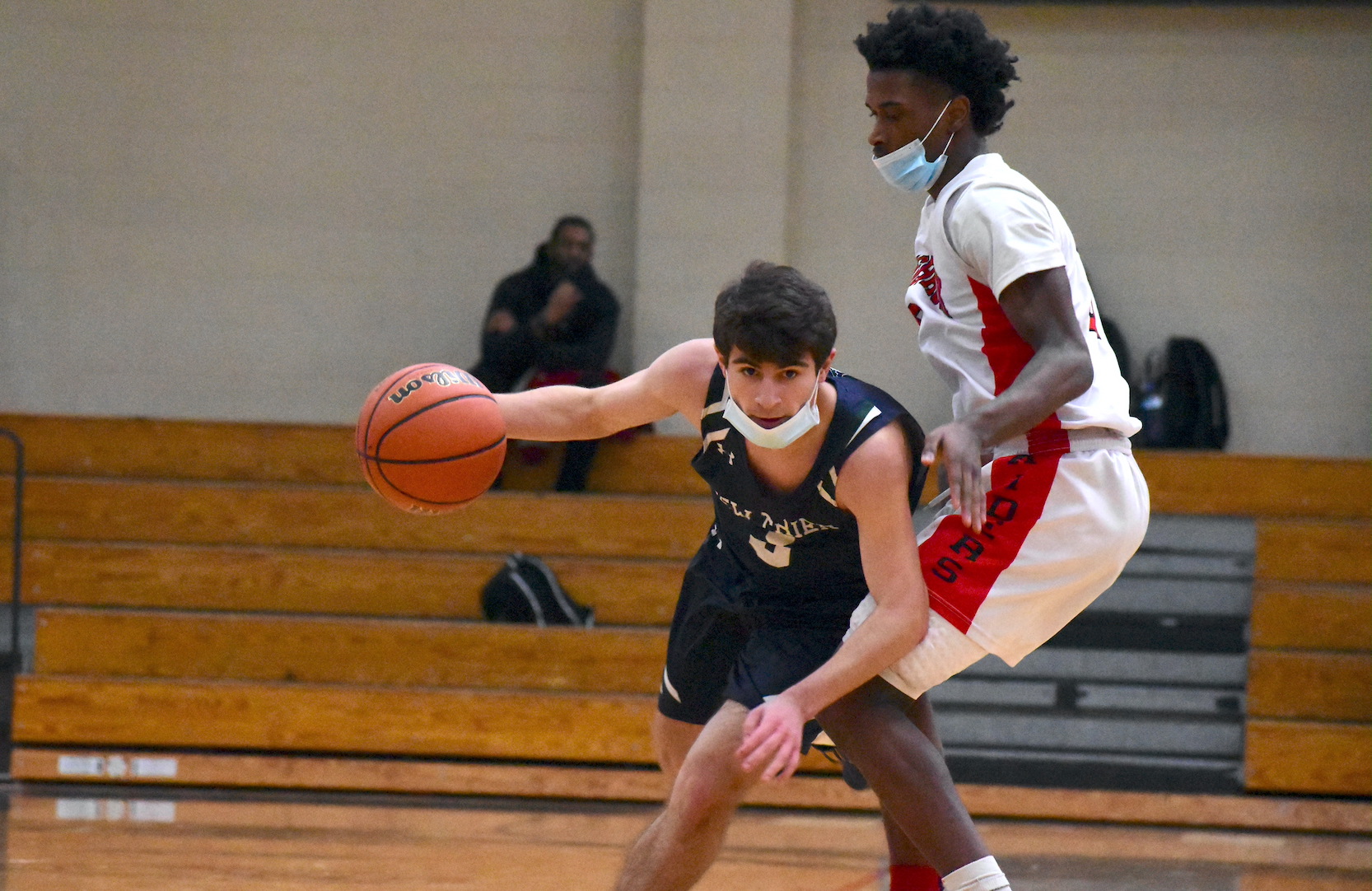 Peter Kanellos knew what it took to slow the game down:

New Trier’s speedy point guard was charged with beating Bolingbrook’s tenacious full-court pressure in order to get his team in position to control the tempo.

“We knew they were going to bring pressure. It is kind of on me to break the pressure and get us into our offense and play our game,” Kanellos said. “Our goal going in was to slow the pace down, dictate how the game went, and I think we did a pretty good job.”

The Trevians dismantled the Raiders’ pressure over and over en route to a 65-37 drubbing on Monday, Jan. 17, in the Martin Luther King Jr. Classic at Fenwick High School.

“He just does everything for us,” Trevians coach Scott Fricke said of Kanellos. “Not only does he guard quickness really well, but he handles pressure well. … They were all over our guys and he makes it look easy.”

Kanellos is in his second season guiding New Trier’s offense and his contributions — such as efficiently breaking a press or undressing a defense with his dribble — are not always tallied in a box score.

But he doesn’t care about that. Kanellos said he has always liked passing more than shooting, an attribute that leads to stat lines like Monday’s 2 points, 4 assists, 3 rebounds and 2 steals.

“There’s no better feeling than getting someone else a good shot and a bucket,” Kanellos said. “And I play with some really talented guys, so.”

The Trevians sank four three-pointers from four different shooters in the first quarter to aid an early 16-9 lead.

Then, when the Raiders began playing tight defense on the perimeter, New Trier burned them numerous times with back cuts that led to easy buckets at the rim.

“They overplay. When a team overplays and takes away passing lanes then … what do they give up? They give up back cuts,” New Trier coach Scott Fricke said. “That’s part of our offense. It’s a read by (our players).”

Just before the half, however, New Trier’s Jake Fiegen drained a step-back triple at the buzzer to make it 35-23.

Out of halftime, New Trier had both levels of its offense working: the shooting and the cutting. And Bolingbrook had no answer.

The Trevians outscored the Raiders 26-6 in the third quarter, building an insurmountable 32-point lead at 61-29.

Fricke was impressed with the flow of his team’s offense.

“I am so happy with the unselfishness of our team,” he said. “Nobody cares who scores points; it’s about getting the best shot we can get as a team and that was evident today. Good shooters were passing up shots to get better shots for other guys.”

Fiegen was a common recipient of those better shots, recording a game-high 21 points. Noah Shannon chipped in 12 points and 6 rebounds, including 9 and 5 in the third quarter. Jackson Munro finished with 7 points, 7 rebounds and 3 assists, while Karlo Colak scored 9 points and Josh Kirkpatrick 7.

The rare shootout matchup with Bolingbrook is part of a string of tough matchups on New Trier’s plate. The Trevs will visit Niles West on Wednesday, Jan. 19; host Glenbrook North on Friday, Jan. 21, and take on Duke-bound Jaden Schutt and Yorkville Christian on Saturday, Jan. 22, at Benet Academy.

The following week the Trevians get their much-anticipated rematch with Glenbrook South on Jan. 28 followed the next day with a contest against standout Cameron Christie and Rolling Meadows in Loyola Academy’s War on the Shore.

The gauntlet is brutal — and also by design, Fricke said.

“These games are scheduled so we can be ready at the end of the season,” he said. “We scheduled as hard as we can possibly schedule. The reason we play these teams is because we want to play every style, play every good team in the state so we’re ready by the end.

“We want to win as many games as possible and have a winning season, but to us it’s about the end of the year.”