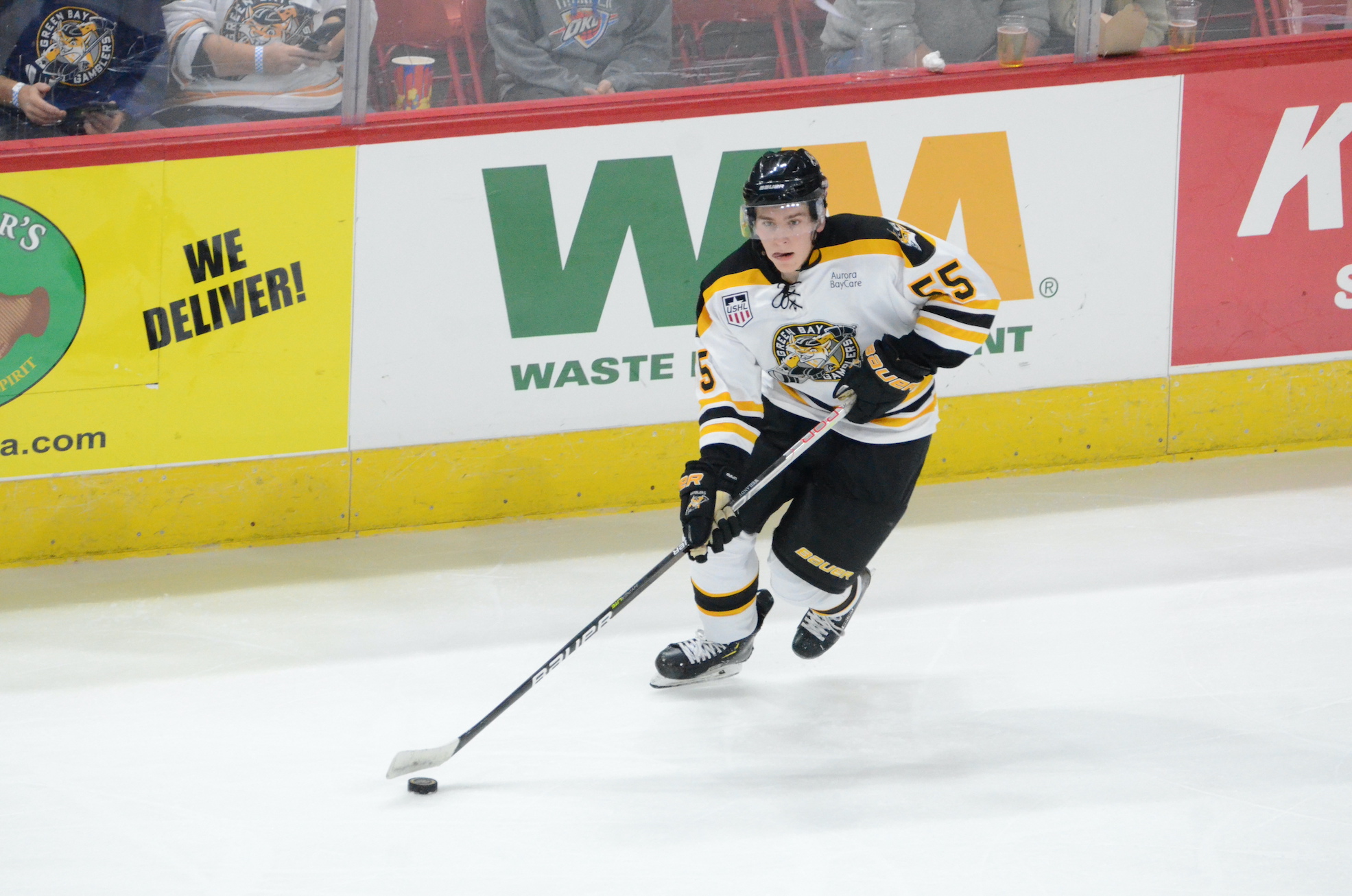 Luke Weilandt is coming off a hip injury and trade to Green Bay. | Photo provided by Green Bay Gamblers

It may feel like a long time since he left the North Shore, but not all that much time has elapsed for the well-traveled Luke Weilandt.

Maybe that’s because in those three years plenty has happened for the flourishing hockey standout, who now plays for the Green Bay Gamblers of the United States Hockey League, a training ground that preps junior hockey players for the next level, whether that be Division I college hockey or the professional ranks.

Weilandt, of Northbrook, cut his teeth with numerous local clubs — from Wilmette Braves and Highland Park Falcons to New Trier’s program to Triple AAA hockey with the Chicago Mission and Team Illinois — before heading up to Sioux Falls for his senior year of high school.

He graduated and played with the Sioux Falls Stampede of the USHL before a nagging hip injury cost him time on the ice and fast-tracked an eventual move to Green Bay, Wisconsin.

The initial hip trouble reared its head in 2020. Weilandt experienced strong pain in his pelvic region in October, rehabbed for a short time and got back to the ice. He was gaining comfort for the Stampede when he was forced to quarantine when his roommates contracted COVID-19.

The time off did not help.

“I was out for about 10 days and that, sitting around doing nothing, reaggravated my injury,” Weilandt said. “So when I went back — this was around January (2021) or end of December (2020) — … it just completely flared up again and I decided it was best to take care of the issue.”

Weilandt underwent a surgery in January and February 2021 and spent time with braces on both legs, restricted mobility and then physical therapy that was primarily limited to muscle squeezes.

Resilient from there, Weilandt began working out again in May and was back on the ice in July.

But in that time, he had to conquer another challenge: a trade.

Weilandt was sent to the Gamblers in May, where he has begun anew, if only temporarily. He intends to attend Merrimack College to play hockey and study accounting, a decision he made back in late 2019.

With the Gamblers, Weilandt has found familiarity. A right-winger with the Stampede, he moved back to center, his natural position that he played since a young age.

“I played center growing up always and when I made the jump to juniors in Sioux Falls I was put on right wing,” he said. “Center is a place I feel more comfortable and have more confidence at, so it’s nice being able to go back to center.”

He’s also come to be part of several communities in Green Bay and enjoyed his time there.

He continued, “I really like the coaching staff, the kids on my team. It’s a great city, great place to play. Obviously with an injury, it can be a little tough at times. It was a little hard getting back into hockey after being out for six months, but I think I managed it pretty well.”

Weilandt, who will turn 20 on April 4, has 2 goals and 5 assists in 21 games played for the Gamblers, according to the team website.

The plan for Weilandt is to head to Merrimack, which is located in North Andover, Mass., in the fall — a one-year delay from the original plan that was disrupted by his surgery. He credited the Merrimack coaching staff for their support.

“They helped me out a lot throughout the surgery,” Weilandt said. “It’s a mental rollercoaster, the surgery, so just knowing they’re in my corner is really nice to know.”

With Merrimack, Weilandt will compete across the country, which won’t be a shock to a guy who has played in Germany, Czech Republic, Italy and Sweden. But even so, Weilandt, who had made a habit of meeting new people, is looking forward to that aspect of living in the northeast.

Even with that travel, he has stayed grounded and connected to the North Shore. He came back to live in Northbrook with his parents this past summer and coached some youth hockey. He expects to do the same this upcoming summer.

“There’s so many guys I looked up to at that age and to be one of those guys to those little kids would be awesome,” he said. “I wouldn’t be where I am at without the people that came back and gave back to the hockey community.”