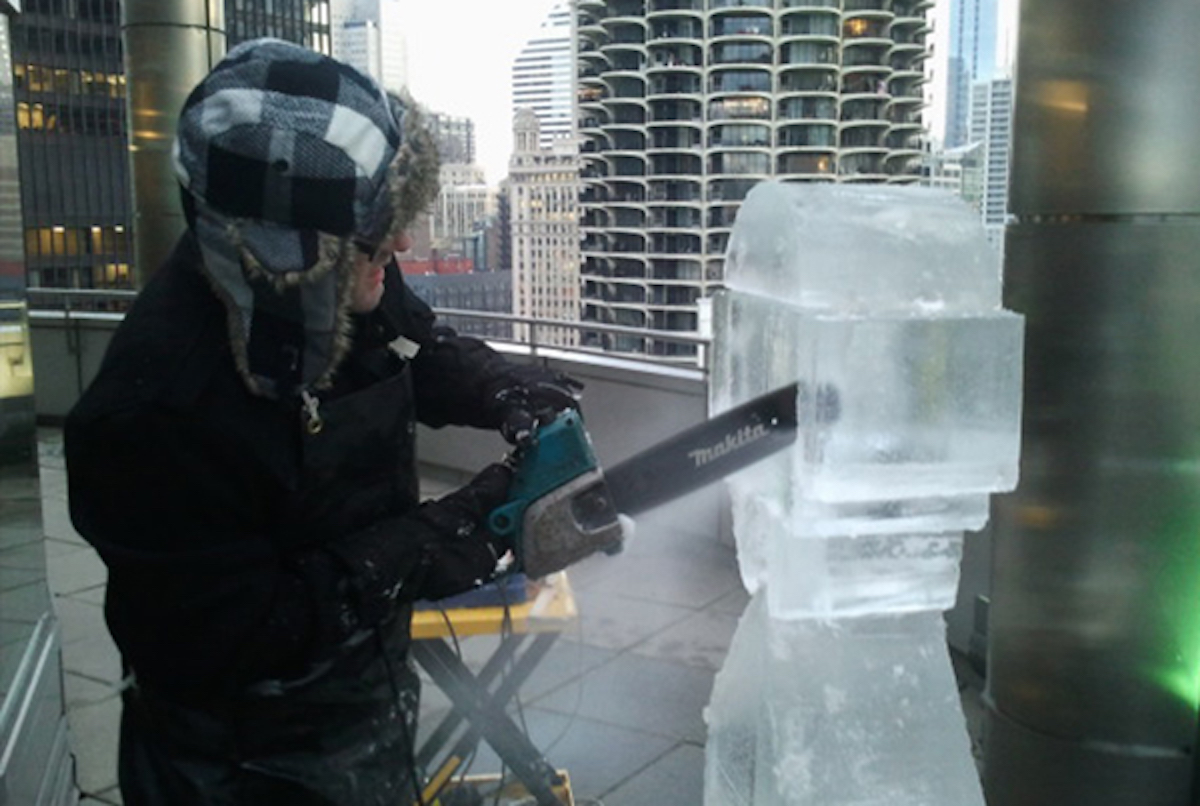 Artist Nate Johnson works on an ice sculpture. Johnson will be in Wilmette on Feb. 12 for Winterfest. | Photo Submitted

The Village of Wilmette wants the community to chill on Feb. 12.

All day that Saturday, the village and other local groups will host Winterfest, the first major event of Wilmette’s year-long sesquicentennial celebration.

Ice sculptor Nate Johnson and his colleagues of Johnson Studios will headline the event — held from 10 a.m. to 6 p.m. with live ice-block carvings on the Village Green, at Linden Square, on Ridge Road and at Chalet Nursery.

Johnson and company will also pre-create custom ice sculptures for Wilmette businesses to display during the event, and the Wilmette-Kenilworth Chamber of Commerce is encouraging the businesses to participate by hosting sales and entertainment.

“Who doesn’t like to see something cut out of ice with a chainsaw,” said Al Swanson, a member of Wilmette’s Sesquicentennial Planning Committee that is organizing the event.

In downtown Wilmette, the committee is hoping for a DJ, while the Wilmette Theatre will present showings of “Frozen,” Swanson said.

The Village of Wilmette was incorporated on Sept. 19, 1872, and early in 2021, village officials created a committee, which comprises community leaders and volunteers, to plan a celebration for the 150th birthday.

Swanson is a former Wilmette trustee and was happy to help out when he was asked.

“Wilmette is a great place and anything that I or anybody else can do to make it better for families, more fun, more welcoming and extend that atmosphere is a positive thing and I am happy to do it,” he said.

The start of the celebration was Sept. 18, 2021, when Village President Senta Plunkett addressed the crowd at the Beach Bash, an annual event from the Ouilimette Foundation.

Events such as interfaith gatherings and history lectures have continued to mark the occasion, but Winterfest will be the first of three marquee events.

Swanson said an art show is planned for the spring and the flagship celebration is set for September in downtown Wilmette. The sesquicentennial will also give a boost to annual events, such as the Memorial Day observance and the summer sidewalk sale.

“The hope is to get more and more people aware of the whole process and what is going on,” Swanson said. “By in large, we need to get this in the minds of people a little bit more.”