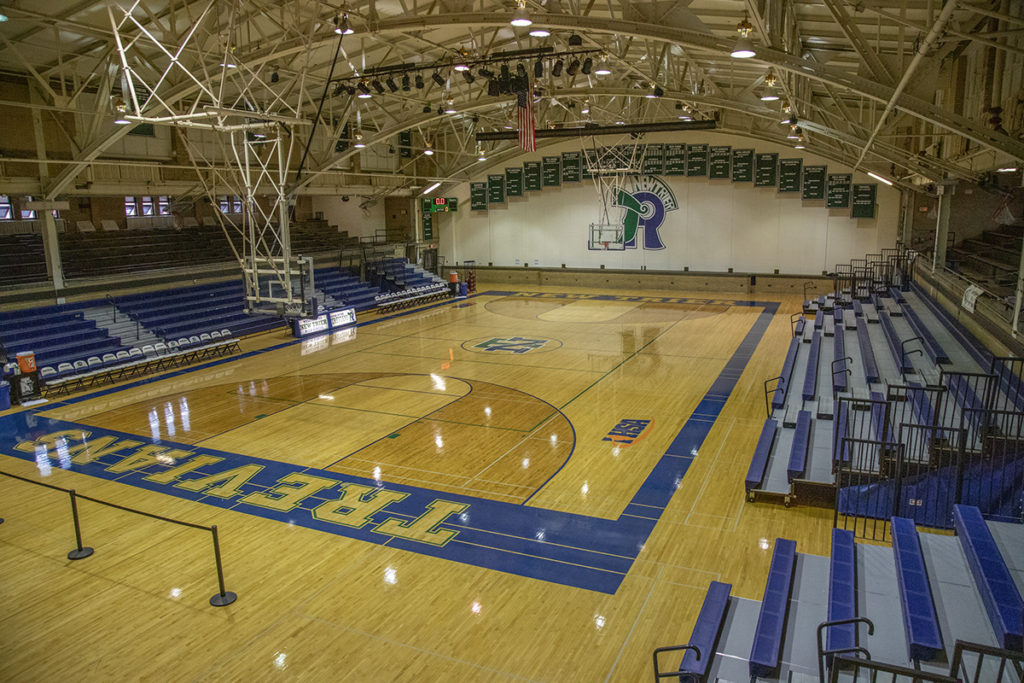 New Trier High School's Gates Gymnasium, a facility officials described as out of date and too small for the needs of today's students, will be demolished and replaced with a new facility. | The Record File Photo

New Trier High School will break ground this December on a monumental rehab project of the athletic and educational facilities on the east side of the Winnetka campus.

The overhaul will demolish the 93-year-old Gates Gymnasium, and the school will pay tribute to the historic arena in a series of events called a December to Remember.

When the project is complete reportedly prior to the 2023-24 school year, New Trier’s Winnetka campus will feature a new gymnasium, a six-lane indoor track, 12 learning spaces, auxiliary gyms strength and conditioning facilities, and more.

The district is inviting alumni, parents, students, staff and residents to attend the events at the Winnetka campus, 385 Winnetka Ave.

• Dec. 4 at noon: Open House and Commemoration Event — Before a basketball doubleheader, attendees can tour the entire Winnetka Campus, which was renovated on the west side in 2017, and view drawings of the new construction. Light refreshments will be served. Attendees will receive a special commemorative giveaway while supplies last. Spirit wear will also be available for sale.

• Dec. 12 at 3 p.m.: New Trier Winter Music Festival — The New Trier Music Department’s annual concert dates back to 1918 and will be held in the Gates Gymnasium one last time. The event features New Trier’s bands, orchestras and choirs. Capacity may be limited to performers and their families, but New Trier will livestream the event for the community.

• Dec. 16 at 5:45 p.m.: Athletic Hall of Honor Induction and Alumni Night — The New Trier High School Athletic Department will induct its third class into the Athletic Department Hall of Honor on Thursday, Dec. 16, recognizing Ben Almaguer, Gary Groh, Ron Klein and Deborah Ofcky. Read more about the inductees here. The inductees will be honored in in the middle of a basketball doubleheader, as New Trier girls (5:45 p.m.) and boys (7:30 p.m.) teams battle Evanston in the final contents played in Gates Gym. Information about the event, including ticket sales, will be posted on the New Trier Athletics page.

The Writers Theatre will open its 2021-22 season with “Dishwasher Dreams” on Dec. 9 in the Alexandra C. and John D. Nichols Theatre at 325 Tudor Court, Glencoe.

“Dishwasher Dreams” is written and performed by Alaudin Ullah, a stand-up comedian whose family hails from Bangladesh and is in L.A. on the verge of success when a family crisis forces him back to New York, according to a release from the theater.

“Deferring his dreams while confronting his family history, he takes us on a moving and hilarious journey from colonial India in the 1930s to Spanish Harlem in the 1970s and all the way to present-day Hollywood for his once-in-a-lifetime audition for a major film,” the release says.

“’Dishwasher Dreams’ is the perfect show to welcome audiences back to Writers Theatre because it is theater at its most essential — an actor, a musician, and a heartfelt story,” said Bobby Kennedy, the theater’s interim artistic director. “With only these potent ingredients, the performance manages to take us from L.A. to New York to Bangladesh, from the 1930s to the present day, all in just 90 minutes.

“Stories of immigration are a foundational part of the American experience. ‘Dishwasher Dreams’ adds a missing thread to our rich tapestry — that of the story of a Bangladeshi, Muslim, stand-up comic and his family’s pursuit of the dream America promised them. It’s an original, hilarious and heartwarming journey and one that connects artist and audience in the type of communal experience we’ve all been missing.”

Sue Watson, a past president of the Wilmette Harbor Rotary Club, began the fundraising drive after volunteering at Camp Atterbury, according to a release from the Rotary.

With winter approaching, Watson utilized her Rotary network to connect with Operation Warm, a charitable organization that provides brand-new winter coats to children in need across North America.

“As Americans, we should do everything we can to welcome these refugee families to our country.” Watson said in the release. “They are here because someone in their family helped our service men and women in Afghanistan, which put their lives in danger.

“Our community showed amazing support and interest in providing warm coats to the refugee families. It really shows our community cares!”

For more information on projects sponsored by the Rotary Club of Wilmette Harbor, contact Watson at SueWaton847@gmail.com or Brent Hendricks at bwh987@gmail.com