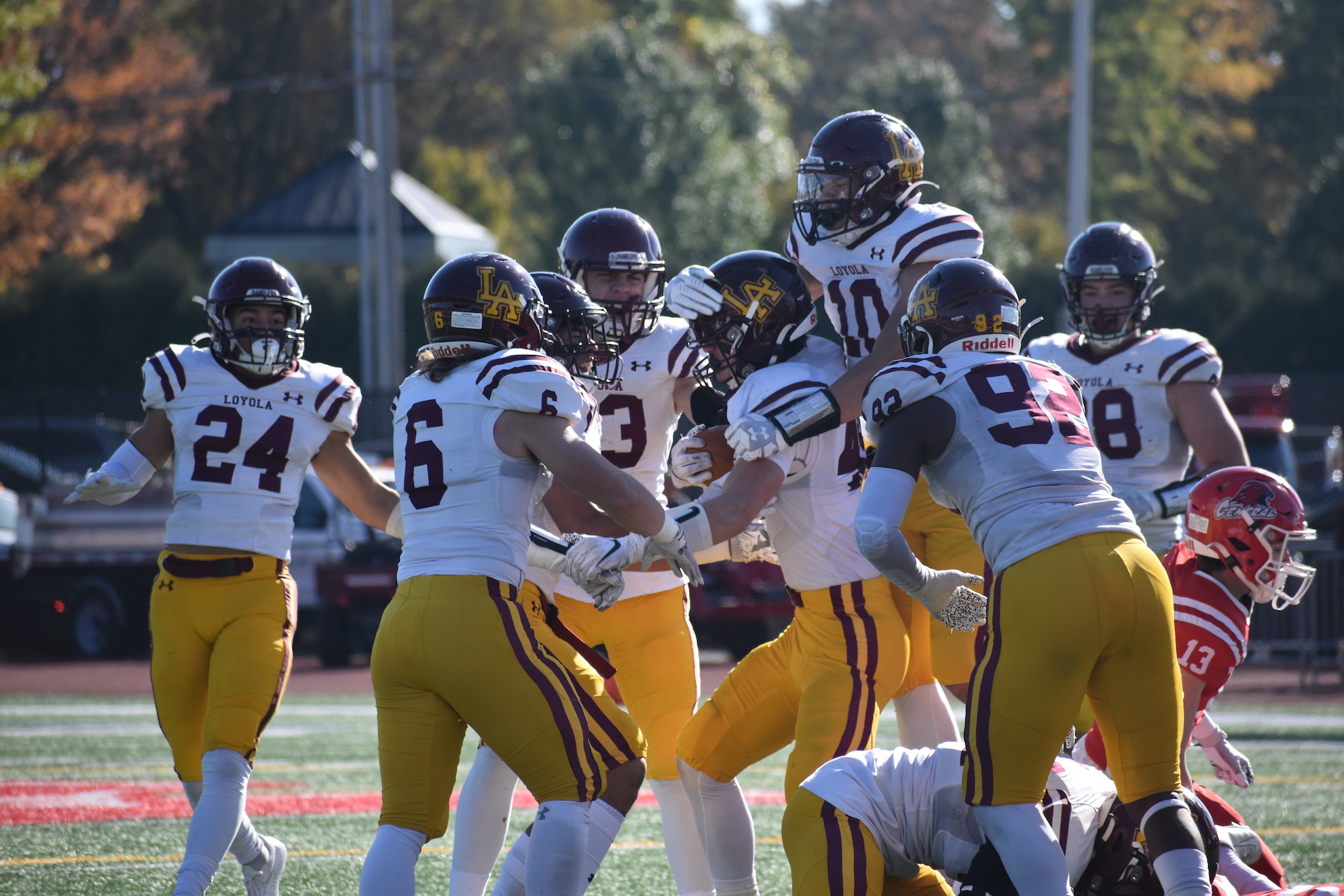 The first half of what was expected to be a challenging second round IHSA Class 8A playoff game for top-seeded Loyola Academy at 17th-seeded Naperville Central brought out the best in the undefeated Ramblers.

With both their offense and defense operating at optimum efficiency, they scored the first five times they had the football and coasted to a 36-7 victory on Saturday, Nov. 6, in a game that was flawed by some breakdowns in discipline that spawned needless costly penalties in the second half.

The decisive triumph sends the Ramblers back home to Hoerster Field for a Saturday, Nov. 13 quarterfinal encounter with ninth-seeded Lincoln-Way East (9-2), which ousted 25th-seeded Minooka (6-5) by a 35-7 score in a second round game played Saturday evening.

“We did better than we thought we would,” coach John Holecek said after his Ramblers efficiently eliminated Naperville Central. “I was happy we jumped on the lead so they couldn’t run the ball (because the deficit was so substantial).

“But the second half we lost 7-3. We have to clean up the mistakes. We can’t have that selfish, chippy, bully behavior. We could afford it in this one. But in a tight match, who knows?”

A recent short-yardage and goal-line trend for the Ramblers continued, as star linebacker James Kreutz and king-sized lead blocker Mike Williams moved into the backfield the first two times the Ramblers were in striking distance.

Kreutz responded by delivering touchdown runs of 3 yards and 1 yard, giving him six TDs for the season and enabling the Ramblers to seize a 13-0 lead in the first quarter.

“The O-line is doing its job and Mike Williams is doing a great job of clearing the way,” Kreutz said, downplaying his newfound flair for scoring touchdowns.

In the second quarter, led by the passing of Jake Stearney, Loyola widened the gap to 33-0.

Sandwiched between the junior’s touchdown passes of 24 yards to Charlie Mahon and 5 yards to Danny Collins was a 7-yard scoring run by backup running back Kyan Gibbs.

An interception by linebacker Jamie McCabe and 8-yard return to the RedHawks’ 29 set up the touchdown by Gibbs and a fumble recovery by Williams — that occurred when Sam Rushin sacked quarterback Owen Prucha — prefaced the 46-yard drive that was climaxed by Stearney’s pass to Collins.

Ugly is the word that best describes the second half in which the RedHawks (7-4) scored their touchdown on Tristen Hall’s 1-yard run in the third quarter and the Ramblers (11-0) padded their lead on Michael Baker’s 21-yard field goal in the fourth quarter.

After being charged with only three penalties in the first half, the Ramblers were guilty of 10 infractions in the second half.

Nevertheless, Holecek and his players had to be very happy with the Ramblers’ vital statistics. They had 20 first downs to 10 for the home team. They were 5-for-9 in third-down situations, while limiting their opponents to 3-of-12 third-down conversions and stopping all three fourth-down attempts. They had a 226-50 advantage in net rushing, and Stearney was successful in 16 of his 19 passing attempts for 140 yards.

Spencer Leadbetter played another noteworthy game at wide receiver, catching six passes for 53 yards; Mahon had four catches for 59 yards; and Collins had four for 22.

“With Roger Simon and James Kyle out (for the season with injuries) coach gave me an opportunity and I’m having so much fun,” said Leadbetter, a junior whose 25 receptions this season are second only to Collins’ 44. “The guys up front are giving Jake the time he needs to throw and he keeps finding me.”

The ground game was led by Mike Regan, who gained 80 yards in 18 carries, and Stearney, who ran 10 times for 64 yards.

“Regan had a great day,” Holecek said. “He made some really good cuts and ran hard.

“James Kreutz is a powerful running back when we use him there; he has the ability to go through holes. We kind of have a committee idea at running back until (the team’s superstar) Marco Maldonado comes back (after suffering a broken collarbone late in the fourth game of the season in which he set a single game school record for rushing yardage). I’m happy with our running game.”

While 2018 Class 8A state titlist Loyola had a multi-dimensional offense, the only consistent offensive weapon for 2013 Class 8-A state champion Naperville Central was Prucha and his effectiveness (14 completions in 30 attempts for 144 yards) was curtailed by a fierce pass rush.

“We knew he’s a good quarterback,” said Brooks Bahr, the Ramblers towering junior defensive tackle. “We worked hard the whole week on bringing a lot of pressure and stopping him.

“I thought it would be closer but we went out there and hammered them.”

Collins agreed that preparation proved to be paramount.

“Everything we prepared for went right,” he said. “Our defense played great and our offensive line had a push.

“We executed and if we keep executing like this that’s all we have to do to get to DeKalb (for the state championship game at Northern Illinois on Saturday, Nov. 27).”

Not only did the compelling conquest at Naperville Central preserve the Ramblers’ perfect record this season it also gave them a 17-0 record to show for the calendar year, thanks to a 6-0 mark in the unprecedented COVID-necessitated spring campaign that was devoid of playoff competition.