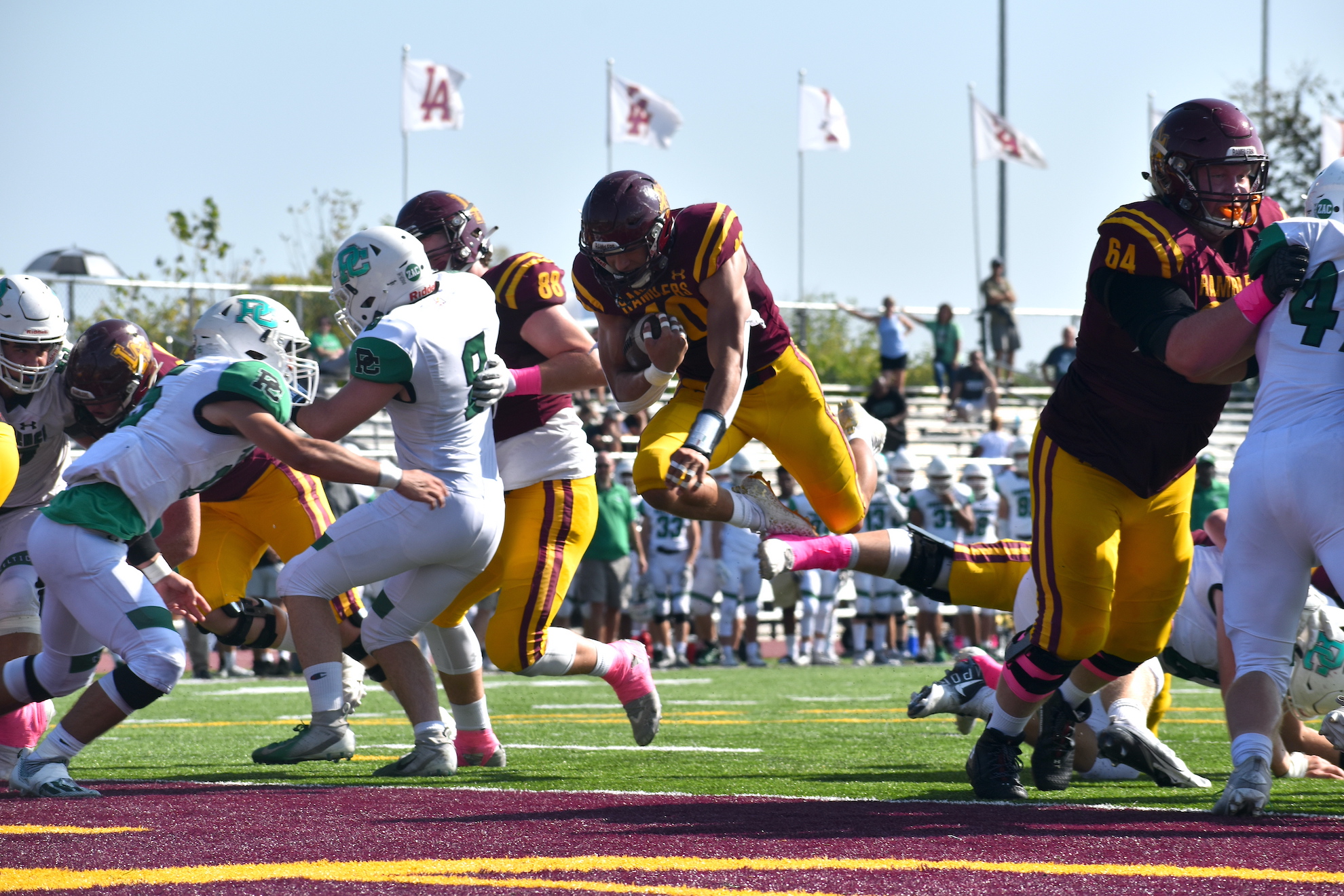 Loyola linebacker turned lead back leaps to the goal line during a successful two-point conversion in the 40-0 victory over Providence Saturday, Oct. 9, in Wilmette. | Photos by Joe Coughlin/The Record North Shore

“You guys are 7-0,” Loyola Academy coach John Holecek told his undefeated Ramblers in the wake of their most powerful victory of the season in their final regular season home game. “You’re halfway right now. If you’re 14-0 you’re state champions.”

If the Ramblers’ performance against Providence Catholic on Saturday, Oct. 9, at Hoerster Field is indicative of their potential, they’ll still be playing football on the last weekend in November.

The preceding three weekends they had to go all out to defeat Brother Rice and Fenwick on the road and Marist at home.

This time they crushed Providence 40-0, and they did it with consummate ease. Holecek started subbing in the second quarter of this senior day celebration and never stopped.

The offensive linemen and receivers who normally make up the bench brigade got significant playing time as did the reserve corps of linemen, linebackers and members of the secondary.

“It was especially nice on senior day to get everybody in and make sure that their parents get to see their hard work pay off,” Holecek said. “They’re a huge part of our team, playing on the scout team or backing up.”

Earlier this season, Providence (3-4) edged Fenwick, 21-20, a team that the Ramblers defeated 27-24 on sophomore Michael Baker’s 41-yard field goal on the last play of the game.

Very aware of the circumstances, the Loyola coach made no attempt to run up the score.

All of the Ramblers’ touchdowns came in the first half when they scored the first five times they had the football.

Playing in his second varsity game and making his first start in place of the injured senior superstar Marco Maldonado and talented senior backup Mike Regan, Nimesheim began the touchdown binge when he broke away for a 35-yard run, and later in the opening quarter the sophomore accounted for the third TD, collaborating with Stearney on a 40-yard pass play.

Sandwiched between these touchdowns was the first of the season for senior James Kruetz, the All-State linebacker candidate who made his offensive debut as a human battering ram when he powered across the goal line on a 2-yard run and then did it again for the two-point conversion.

In the second quarter, Luke Collins came in for Stearney and scored on a 2-yard run and threw an 11-yard pass to senior Danny Collins for the fifth touchdown. Baker kicked his third extra point of the half after the TD reception by Danny Collins, giving the Ramblers their 35-0 lead at the intermission.

“Will has got a burst (of speed),” Holecek said. “He’s got good vision. He runs low to the ground with some power. He’s going to be excellent in the next two years when he bulks up.

“Luke is a competitor. He’s got talent and he’s got length. His stride is huge; he’s got some wheels. He’s a great No. 2 quarterback.”

In the Marist and Fenwick games, the backup came through in clutch situations when Stearney had to leave the field after being shaken up.

“Today it was definitely a different situation,” Luke Collins said. “It wasn’t a high-pressure moment but I had to lock in. Even though the score was 21-0 it was still 0-0 in my head.”

Before assuming the role of a spectator in the second quarter, Stearney completed 6 of 8 passes for 84 yards. Junior Spencer Leadbetter was his primary receiver with a team-high four catches for 34 yards. Luke Collins’ longest completion came when he connected with senior Danny Mitchell on a 43-yard play.

The offensive line was a study in excellence, opening holes galore for the running backs and supplying superb passing protection for the quarterbacks.

“It was a great team win,” said senior offensive lineman John Michael Talanges, who got the rest of the afternoon off after an exemplary performance in the first quarter. “Getting all the seniors out there on the field was very exciting. They work hard all week and they deserve to go out there. They were awesome.”

“We love getting those guys in,” agreed Michael Hough, another stalwart senior starter on the offensive line. “And our defense was definitely a huge strong point.”

Defensively, Loyola played an almost flawless first half, holding the Celtics to minus-3 rushing yardage and +1 passing yardage. It wasn’t until under five and a half minutes remained in the third quarter that they finally were able to get a first down.

“On both sides of the ball we did well,” said Mazeed Soyege, a junior who subs on the offensive line. “Our defensive backs did a good job of guarding their receivers so their quarterbacks didn’t have anybody to throw to.”

Although third and fourth stringers were on the field much of the time, the Ramblers continued their domineering play in the second half. On their first possession they drove 78 yards to the Providence 2-yard line before a goal line fumble ended the drive.

But on the Celtics’ first play senior defensive lineman Jose Sango threw down the ball carrier in the end zone for a two-point safety.

Later in the third quarter the Ramblers took over on downs at the Providence 42-yard line and, led by the running of Otarola and Gibbs, they penetrated as far as the 5 before settling for Baker’s 26-yard field goal that ended the scoring and activated the running clock with 8:08 left in the mismatch.

During the entire game the Celtics were in Loyola territory just twice. Their deepest penetration was the Ramblers’ 37 on a fumble recovery late in the first half but they were immediately stopped on downs without advancing any further down the field.

Flaunting a 13-game winning streak that began when they were 6-0 during the unconventional COVID-necessitated spring season that didn’t include playoff competition, the Ramblers now will hit the road for their next regular season game against St. Patrick (4-3) on Friday night, Oct. 15, at Triton College.

Then, they will conclude regular season play when they visit arch-rival Mount Carmel (5-2) on Oct. 22.