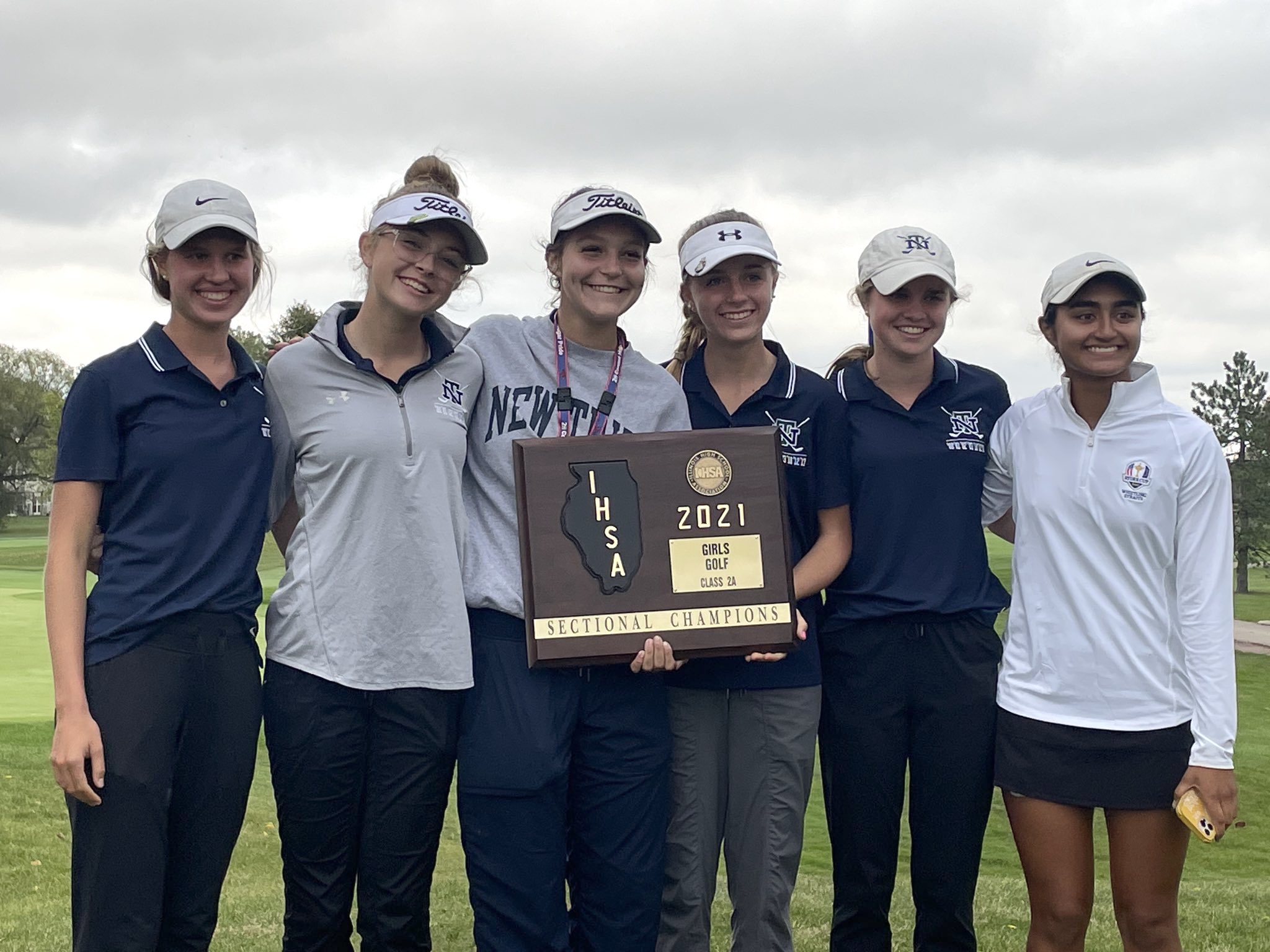 New Trier’s girls golf team continued its dominant season with a six-stroke victory in sectional play Monday, Oct. 4, when the Trevians boys joined in on the title-taking fun.

Behind medalist Amy Beanblossom’s 74, the girls team won the IHSA Class 2A Hoffman Estates Sectional with a collective 311, finishing ahead of second-place Loyola Academy (317), at Poplar Creek

Backing up Beanblossom were sisters Peyton and Carter Sichol, who shot a 77 and 78, respectively, for the Trevians. Siara Patel rounded out the scoring with her 82.

Sophomore Katie Magner led the Ramblers by carding a 76 and tying for fifth place. Junior Bailey Bitbabo’s 78 tied her for 10th for Loyola.

Both the Ramblers and Trevians are headed to the state tournament Friday and Saturday, Oct. 8-9 at Hickory Point Golf Course in Decatur. New Trier owns seven IHSA championships, including four straight from 2000-2003. It last won a title in 2017 and finished fourth in 2018 and eighth in 2019. There was no tournament in 2020. The Ramblers took third in 2019 and sixth in 2018 after winning three straight second-place honors from 2013-’15.

New Trier and Glenbrook North boys golf teams continue to trade competition honors, and it was the Trevians turn Monday, Oct. 4, when they bested the Spartans by two strokes in the the IHSA Class 3A Lyons Sectional.

Alex Creamean and Gage Johnson added a 72 apiece to chip in for the Trevians.

Last week, North topped New Trier by one stroke, 287 to 288, to win the regional crown at Heritage Oaks in Northbrook. The two regional scores were the lowest team totals in regional competition across the state.

Both teams advance to the state championships set for Friday and Saturday, Oct. 8-9, at The Den at Fox Creek in Bloomington.

Loyola Academy individuals Ryan Banas and Joey Peracci are also headed to Bloomington. Banas shot a 67 and Pieracci a 74 to punch their tickets to the the state finals

Since coach Pete Drevline took over New Trier in 2009, the Trevs have qualified for the state tournament all 11 seasons and finished second six times. It also has one third-place trophy, earned in 2019, the last time there was a state tournament.

On Monday, Oct. 4, the North Shore Country Day boys squad traveled out to Byron, Illinois, and punched its ticket to state on Friday and Saturday, Oct. 8-9, at Prairie Vista Golf Course in Bloomington.

The Raiders finished second in an IHSA Class 1A sectional shooting a 320 behind Robbie Black and Luke Madigan, who each carded a 78. IC Catholic, out of Elmhurst, won the tournament with a 312.

Hugo Hourihane (82) and Jack Hunt (82) pitched in for NSCD, which is on the hunt for its fifth state trophy and first since a second-place finish in 2014.