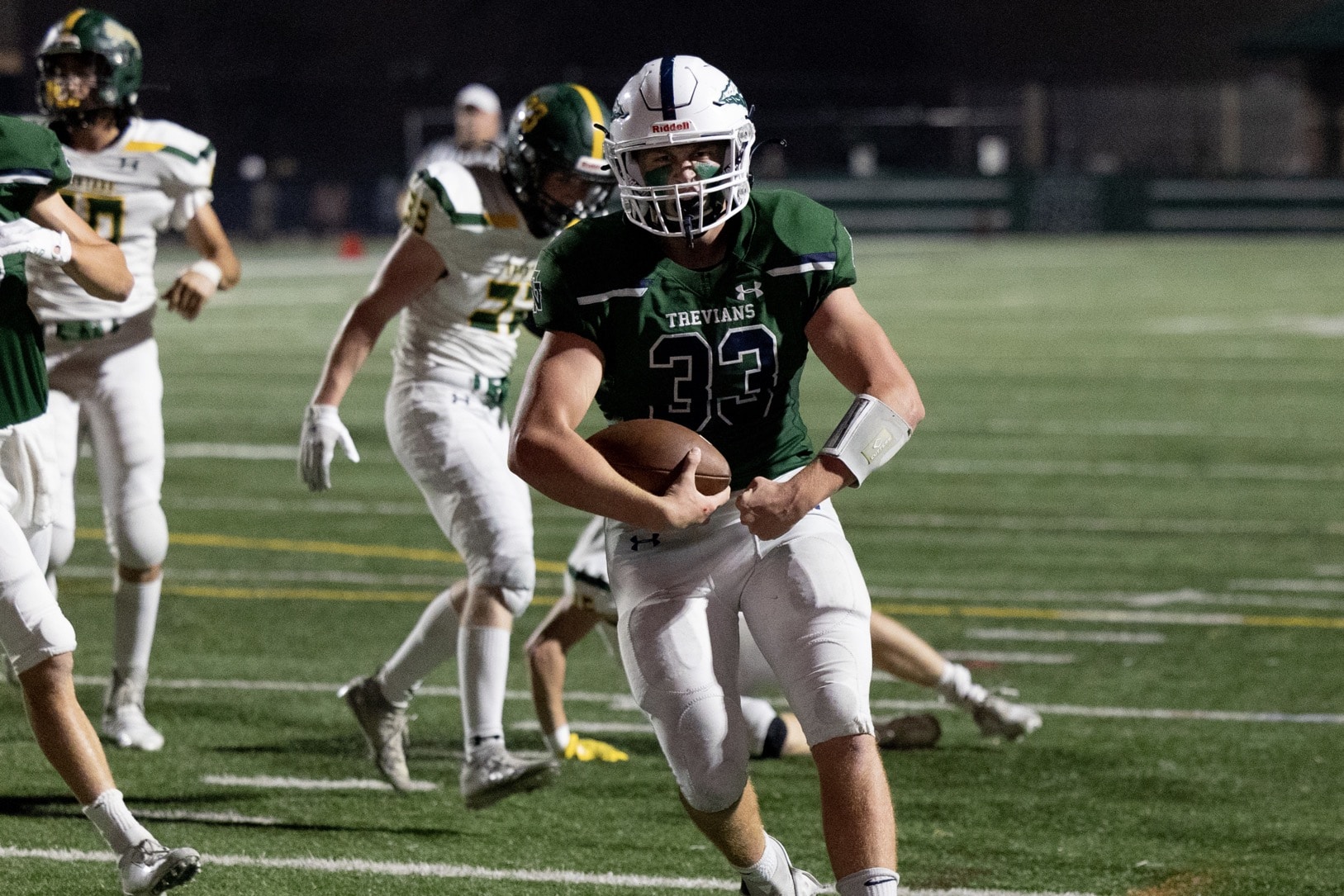 Three weeks before the start of New Trier’s season, Trevians coaches opted to move senior Jack Cummings to the running back position. Just two months after that decision, Cummings delivered one of the best performances from the backfield in program history.

Cummings racked up 195 yards of total offense and scored five first-half touchdowns to help the Trevians cruise to a 63-7 victory over the Glenbrook North Spartans on Friday, Oct. 1, in Northfield.

“Obviously, I couldn’t have done it without my offensive line making those big holes for me,” Cummings said. “I mean, you could drive a semi truck through some of those holes. … I broke a few tackles, and made a few players miss, but really it was my teammates who supported me through those five touchdowns.”

After a Week 5 loss to Evanston, Cummings and New Trier’s leaders knew the Trevians’ road to the playoffs started Friday night.

“Last week, after the loss to Evanston, we kind of played with a chip on our shoulder all through practice this week,” Cummings said. “We felt like we played a bad game all around — offense, defense and special teams last week. So, we knew that if we were going to make the playoffs, the road starts right now and we have to work hard every single day at practice and every single game we have to play our best game moving forward. And that’s what we did tonight.”

Joining Cummings with a strong rushing performance of his own was sophomore Jackson McCarey, who rushed for 177 yards. McCarey scored his second touchdown of the season of more than 80 yards when he ran home an 89-yard score.

The Trevians wasted no time in showing that they were ready to wash away a forgettable performance last week against the rival Wildkits.

New Trier scored 21 points in the first quarter, before adding 28 more in the second. The Trevians entered halftime with a 49-0 lead over the Spartans.

In total, the Trevians tallied more than 400 yards of total offense on the night.

“I think we responded to a bad week last week,” New Trier head coach Brian Doll said. “We played poorly last week. Tonight we changed a lot of things. We had some new guys out there, but in general, we had a really good end of the week of practice and it translated to tonight in all three aspects.”

The Trevians Week 6 win on homecoming night gives them their first conference victory of the year and improves their overall record to 4-2. New Trier will face one of its toughest challenges of the season next week, as the Trevs will travel to Glenview for a pivotal matchup against the Glenbrook South Titans (5-1).

The Titans dropped their first game of the season Friday, losing a 31-17 game against Maine South that they led going into the fourth quarter. But despite South’s defeat, the Trevians are expecting a battle.

“We have to be clean next week against a really solid Glenbrook South team that is very physical with a great running attack,” Doll said, later adding “it has to be a physical game for us and we have to match their intensity up front.”

New Trier will need to limit the Titans’ powerful run game led by senior Will Collins if it hopes to leave Glenview with a victory.

“We have to win first down,” Doll said. “That is going to be a big thing in the game next week. Every time that you play Glenbrook South you can’t get into short-yardage situations because they can find ways to get two or three yards with the beef they have up front and their full back.”