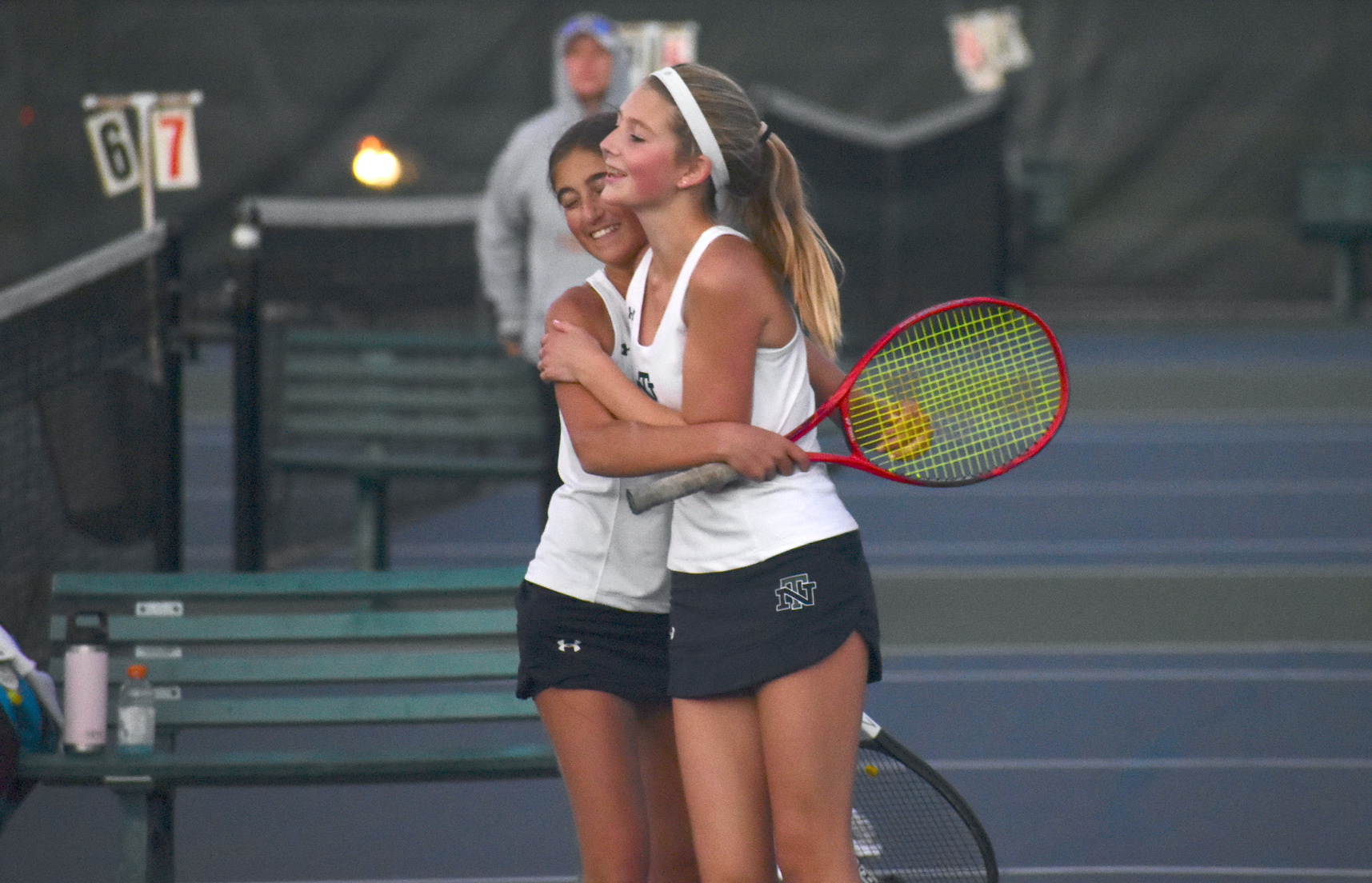 The youngsters were out late Thursday night at A.C. Nielsen Tennis Center in Winnetka.

Four freshmen battled in doubles play for roughly two and a half hours in the most competitive bout in New Trier’s victory over Glenbrook South Sept. 23.

In the No. 1 doubles match, the Trevians Keri Rothenberg and CoCo Zabel came back to outlast fellow freshmen Alexandra Popa and Sophia Denizov 3-6, 6-1, 6-4.

“We pulled both of them back,” he said. ” … We needed a change. We were trying to give (GBS) a different look. With two playing back you take away a net person and there’s no target anymore (for the opponent).”

In the new formation, Rothenberg and Zobel first caught their opponents off guard and then withstood a number of their attacks. The slowed gameplay forced Titans errors and allowed the Trevs to pick opportune times to strike.

The New Trier duo was down again 3-1 in the third and decisive set, but fought back to win five of the next eight games in front of their cheering teammates.

Rothenberg and Zabel are two of seven freshmen on New Trier’s varsity roster. Three of them are in the Trevians top six that make up first and second singles and doubles.

Luciana Parrilli is the other top freshman. She teamed with senior Keira Botjer for a straight-set win against Glenbrook South at No. 2 doubles.

Sophomore Madison Liu continued her successful season with a 6-1, 6-0 win at top singles, while junior Julia Ross at No. 2 singles also earned a straight-set win.

Liu is considered one of the best singles players in Illinois with her only losses this season coming to an out-of-state opponent and Lake Forest’s Autumn Rabjohns.

Liu’s high school tennis debut in 2020 was abbreviated because of COVID-19 protocols. Plus, with pandemic precautions, contact with teammates and opponents was limited.

She is already enjoying the more-normal experience of 2021, which includes team meals and other group activities.

“We connect really well and we like spending time with each other,” Liu said of her team. “We like encouraging each other and cheering for each other when we’re playing. I think it helps us win.”

On the court, Liu is looking to improve her serving throughout the season to be ready for the IHSA tournament in October.

Morse-Karzen is still massaging the lineup but believes he has a “top three or four” team in the state.

“We’re pretty solid right down the line,” he said. “We just need to get through sectionals because we are solid at each position.”

New Trier is amid its conference schedule but will break to meet up with state powers Deerfield, Hinsdale Central and Lake Forest on Saturday, Oct. 2, at Lake Forest High School.

In 2019, the last state tournament, the Trevians finished third behind Lake Forest and Hinsdale Central.