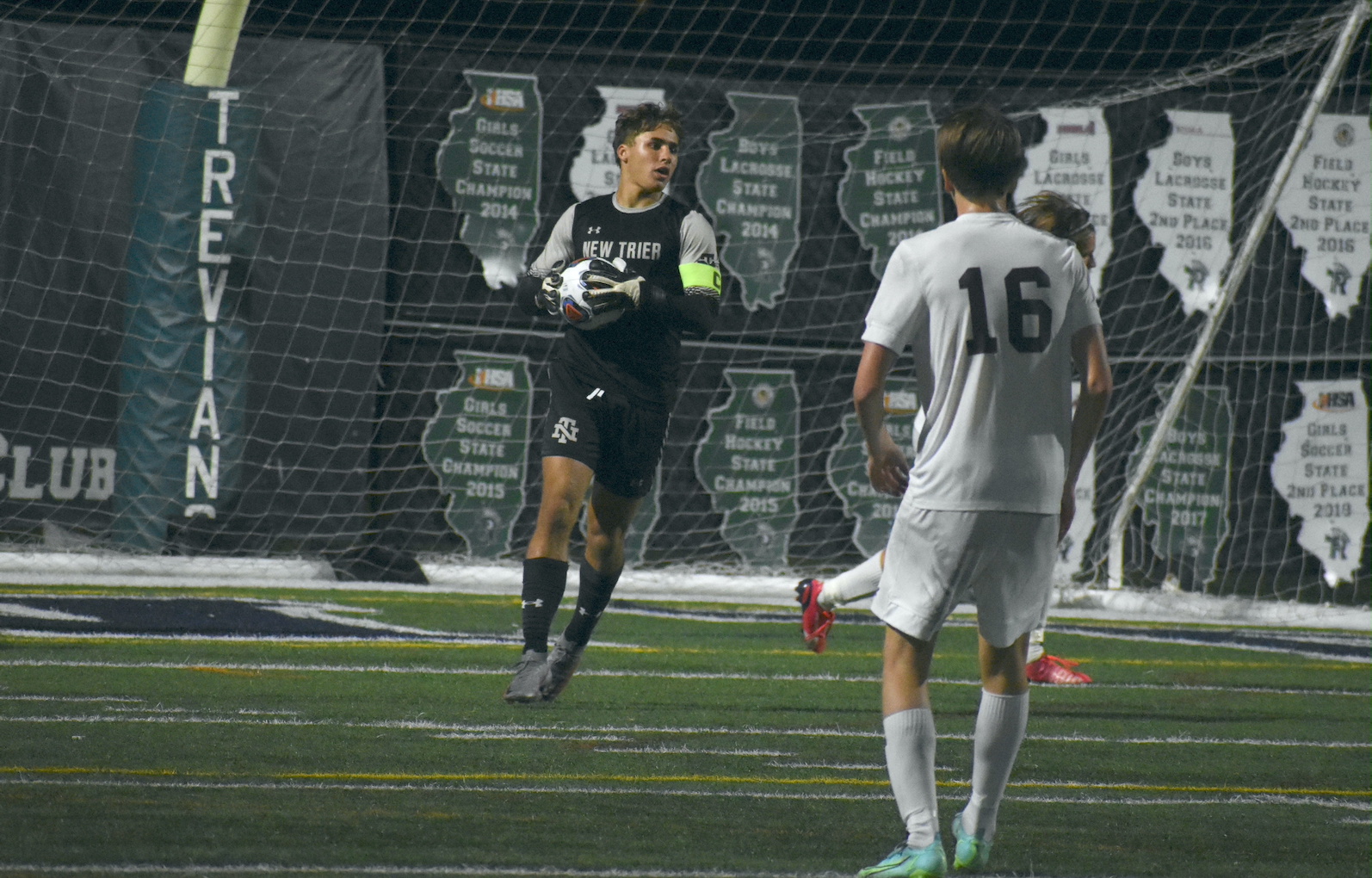 Crawford is a senior goalkeeper with the Trevians. He saved three shots during a championship shootout of the Northside College Showcase on Saturday, Sept. 4, and will play for Loyola University at Chicago next year.

If it’s a home game, I always get to New Trier early to just work with the trainer or watch the game being played before us. It certainly gets me in the mindset. Before the game, I get my gear out by my chair, in front of me, even before the team gets in there. So I am organized and ready before we take the field.

2. What’s going on in your mind when facing a penalty kick?

Penalty kicks are all mental. As a goalkeeper, the pressure is not on you. Personally, I’m very excited when it gets to PKs. … I have the opportunity to save our team. In terms of my mentality going into it, statistically a right-footed kicker shoots to their right. Using that statistic, I try to cover 25 percent of goal: the lower right side. I feel I have a duty to defend that part.

3. Why is Loyola at Chicago a good fit for you?

I believe it is a place where I can thrive, both athletically and academically. It’s a spot where I think I can get playing time and thrive for the team and academically I can pursue my interest in biological sciences. There’s a great program for that.

I always wanted to pursue sports in some way. If it would be from a medical perspective, my dream job would be a sports medicine physician. Outside of that, sports therapy or possibly sports psychology. Just something involving sports and another passion of mine, science.

I like to spend time with people I love, and my friends as well. As I mentioned, I love sports, so getting to play sports with my friends is something I look forward to. And spending time with family and extended relatives, who all live in the area.

6. If you could play another sport, what would it be?

It would definitely have to be basketball. I played basketball for New Trier up until junior year and I love it. I wouldn’t say I regret giving it up, since now I put all my time and effort into soccer, but it’s something I still pursue with friends.

I always go for the drink section first, probably a Propel or a Gatorade, and then looking at food, I usually go for something like the protein cookies or protein bars. They seem healthy, but I’m sure they are a bit deceiving.

8. You just won the lottery. What is your first purchase?

My first purchase would be a house. Just owning real estate would certainly set me up. … And then I’d look toward helping others and getting my life started profession wise, pursuing education or looking into starting a business possibly.

10. What is this team capable of accomplishing this season?

I’m really looking forward to where this season brings us. It’s really a strong team. We have a lot of strong guys ready to make an impact. We brought in a lot of new players this year, and me as a captain and other returners really had to set a standard. And I think the preseason and the first few games have proved that. We are capable of a long run at state, and certainly my goal is to win the whole thing. I 100-percent believe this team is capable of that.