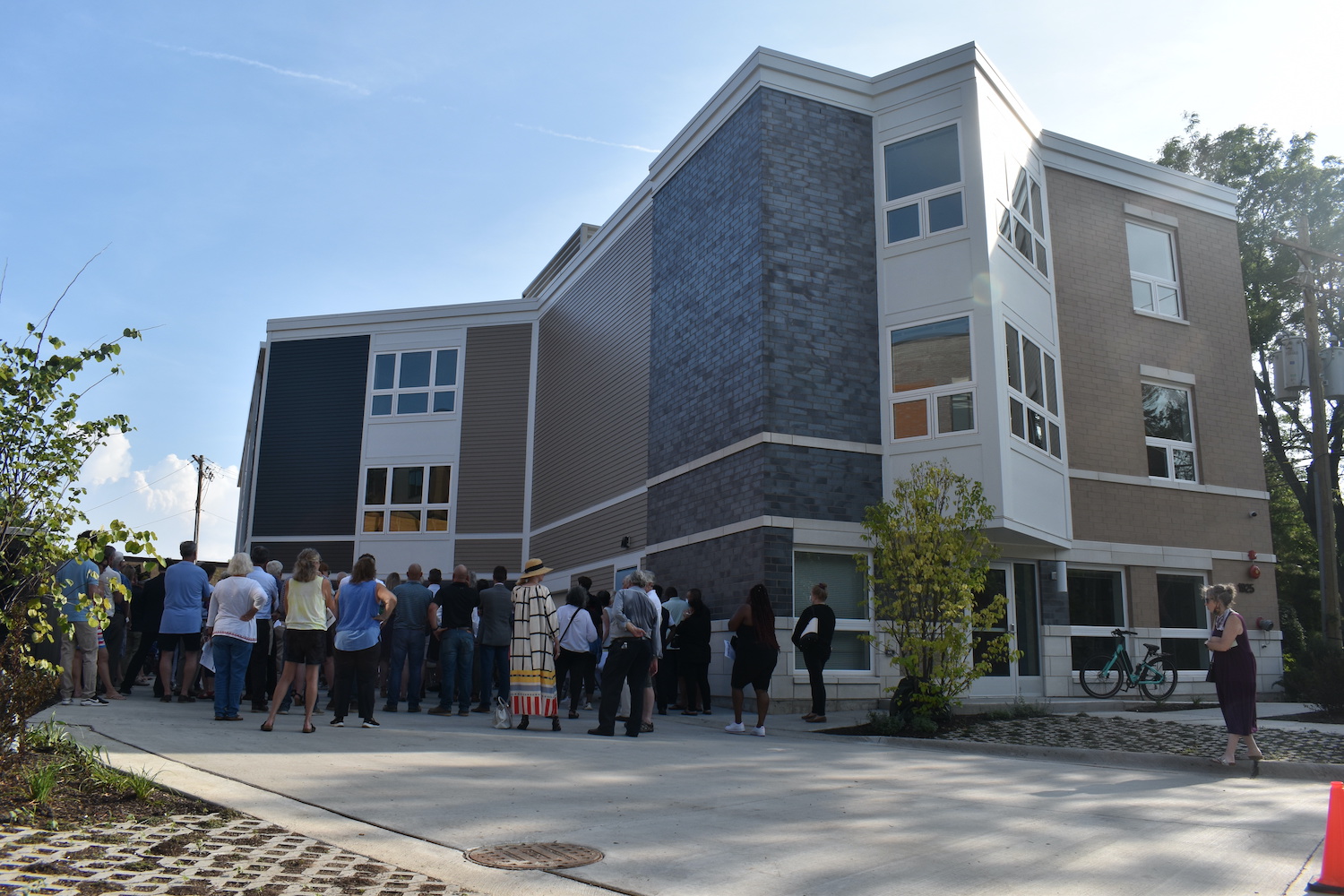 Dozens gathered in the drive of Cleland Place on Thursday, Aug. 24, to celebrate its completion. | Photos by Joe Coughlin/The Record North Shore

Wilmette celebrated a milestone when on Thursday officials, developers and community members gathered to cut the ribbon on the village’s first nonsenior affordable housing development.

Richard Koenig — executive director of Housing Opportunity Development Cooperation, which developed and owns the property — emceed the event and told the crowd that with Cleland Place, HDOC now manages affordable housing in 15 communities.

Cleland Place is named for Jean Cleland, a longtime Wilmette resident, a founding board member for HODC and a longtime advocate for diversity and inclusion in her community.

The building features 10 one-bedroom and six two-bedroom apartments that cost $600 and $800 per month, respectively, Koenig said. It also has 20 parking spaces, a community room, laundry, security cameras and accessible units.

Funding for the project came from the Illinois Housing Development Authority, National Equity Fund, Wintrust Bank, ComEd (which provided a grant to make the building a green facility) and Housing Authority of Cook County.

Developing affordable housing is a longtime struggle for Wilmette and its neighbors.

Wilmette was one of 46 Illinois communities (1,000 or more residents) with less than 10 percent of its housing units deemed “affordable” by the Illinois Housing Development Authority in a 2018 report.

The IHDA report required all listed communities to submit a plan to reach the 10 percent mark. For Wilmette, Cleland Place was already well underway.

After purchasing the land at 1925 Wilmette Ave. from American Legion Post 46, HODC first presented development plans for Cleland Place to the Village of Wilmette in 2015.

More than a hundred residents came to early Plan Commission meetings with opposers to the project expressing concerns about property values, traffic, community safety and more.

By 2018, Koenig and HODC had refined their proposal after numerous meetings with neighbors and village officials, but were still met with opposition from residents.

Wilmette Village trustees, however, were unanimous in their approval for the final plans in April of 2018.

Village President Senta Plunkett, who was a trustee for that vote, recalled that night as she spoke to the crowd Thursday.

“It was such a feel-good meeting,” she said. “The project we approved, we were all so happy about. We left the meeting feeling good things were in the future in Wilmette.”

Koenig, who hopes Cleland Place residents can move in by Sept. 1, told The Record that negative feedback is a regular part of the process when working to develop affordable housing units.

But those concerns are assuaged as residents hear more about the proposal, he said.

“It happens early in the process,” Koenig said. “They have preconceived notions about what it is going to be. Over time, they learn it’s just a place for people to live. Just because it costs less money doesn’t make them less people.”

Wilmette resident Nykia Threlkeld is one of those people.

Threlkeld told The Record that her disability does not allow her to work, and while she can make rent right now, she knows as times goes on — and rent rises — she will be forced to leave.

With that in mind, Threlkeld became one 117 initial applicants for the 16 available units at Cleland Place. She was one of the first eight approved and was on hand with her mother, Pam, to get a good look at the place.

Jonscher reflected on the history of the site, which was home to the first schoolhouse of Gross Pointe before it was sold to the legion.

Jonsher and Haszlakiewicz had no need for tissues or resentful banter. Looking upon the brand new facility, they were proud.

“We were glad to see it go this way,” Jonsher said of selling the building to HODC. “It’s a positive thing for the community, which needed more affordable housing.

“What an appropriate turnover this was.”