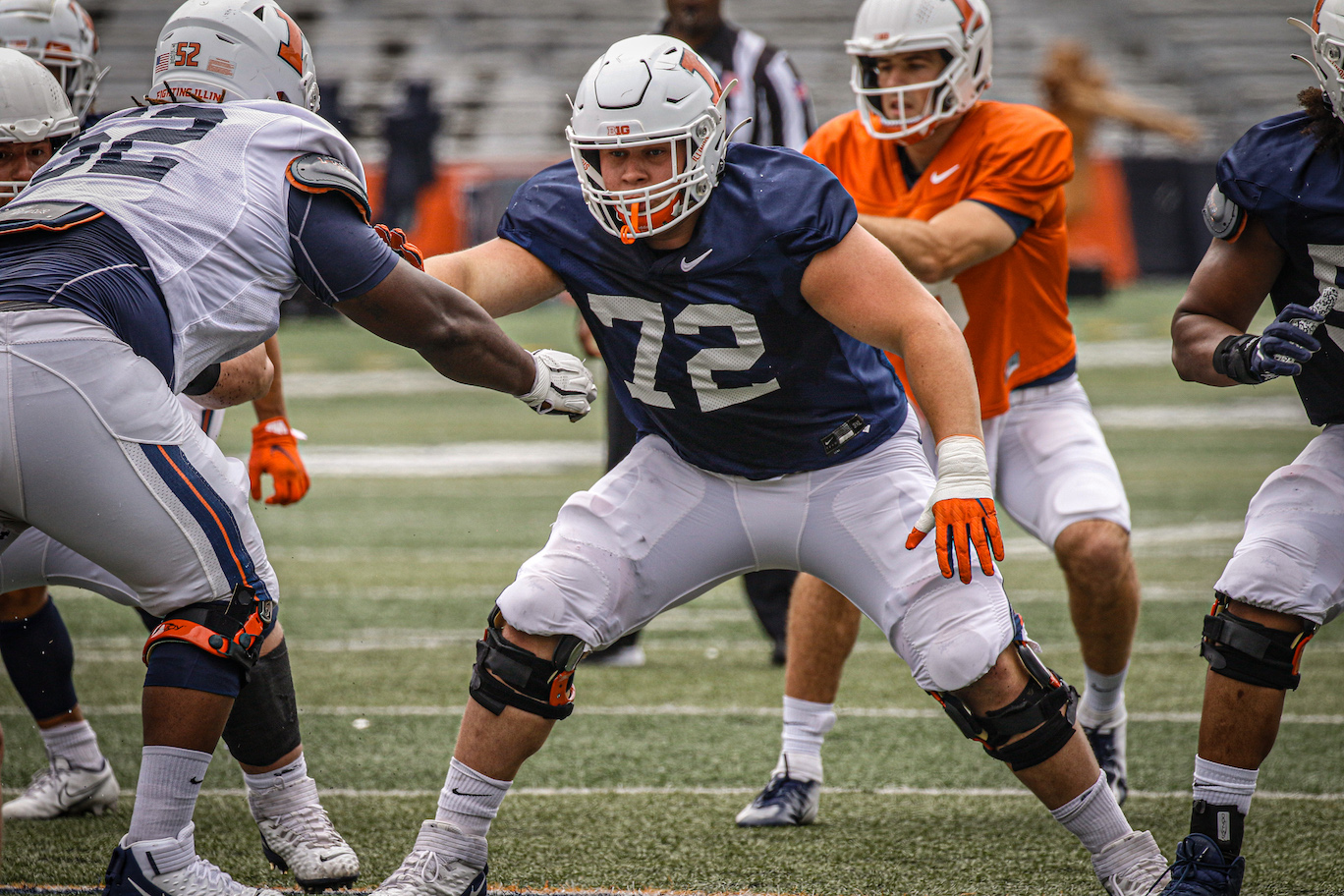 Jack Badovinac had no plans to leave Colgate University for another college.

The Loyola Academy alumnus figured his four years at the university would complete his college tenure.

But then, an opportunity appeared.

In 2020, the NCAA granted all collegiate athletes an additional year of eligibility because of the disruptions caused by the COVID-19 pandemic — for instance, Colgate only played two games in a delayed season. So, Badovinac had a burning question:

After spending four years in the FCS, three of which ended with First Team All-Patriot League honors, could he play at the next level, FBS?

“I’ve always had confidence in my game,” the offensive lineman said. “I’ve always been a smaller guy; I’ve never been the biggest offensive lineman. I’m used to being undersized, but I was always able to handle myself. So I had confidence in my game and I was excited to play at a bigger level. I was just ready to step up to the challenge and see where it would take me.”

Badovinac reached out to Loyola head coach John Holecek after Colgate’s spring season to see if he could help in a search for a new school.

A University of Illinois alumnus, Holecek contacted Illinois offensive line coach Bart Miller right away, knowing that a new coaching staff might be interested in an experienced, in-state player like Badovinac. Plus, recent Ramblers graduate Josh Kreutz will be a freshman lineman for the Illini this season

Miller and Badovinac hit it off. The lineman liked the new coaching staff, especially first-year head coach Brett Bielema, and is a fan of Big Ten football. His cousin even played for Michigan State University.

So when Illinois showed interest, Badovinac secured a chance to prove himself at the next level when he committed to the Illini in April.

“It’s been a good transition,” Badovinac said. “I loved all four years at Colgate, I wouldn’t change that for the world. I’m an alumnus there. I’m excited to spend a new chapter here at Illinois.”

He arrived in Champaign over the summer, and his teammates welcomed him with open arms, he said.

During training camp, he’s been battling for a starting guard spot on an Illini offensive line filled with college experience.

The competition so far has been great, Badovinac said. While they are fighting for playing time, the linemen are also pushing each other and learning from one another.

Holecek knows the talent Badovinac brings to the Illini. While he stands at 5 foot 11 (6-1 on the state sheet), Badovinac uses his feet well to stay with defensive linemen, especially on the run block, Holecek said.

During his senior season at Loyola, Badovinac racked up nearly 100 pancakes (when an offensive blocker legally brings his opponent to the ground) and proved to be a reliable lineman in 33 career starts at Colgate.

Holecek can’t wait to watch how he competes in the Big Ten.

“The fact that he gets to show that on the big stage now, hopefully he stays healthy,” Holecek said.

The big stage begins Saturday, Aug. 28, when Illinois starts the season against Nebraska in Champaign. I

llinois is starting a new era with Bielema, and Badovinac is excited to be a part of it, as well as run through the team tunnel into the stadium filled with Illini fans. He not only wants to represent his home state but also to prove to himself that he can play at the Big Ten level.

“I have confidence that I can compete in this level,” Badovinac said. “I feel like I do belong here and I’m in the mix with all the guys. I’m excited to go out against Nebraska.”