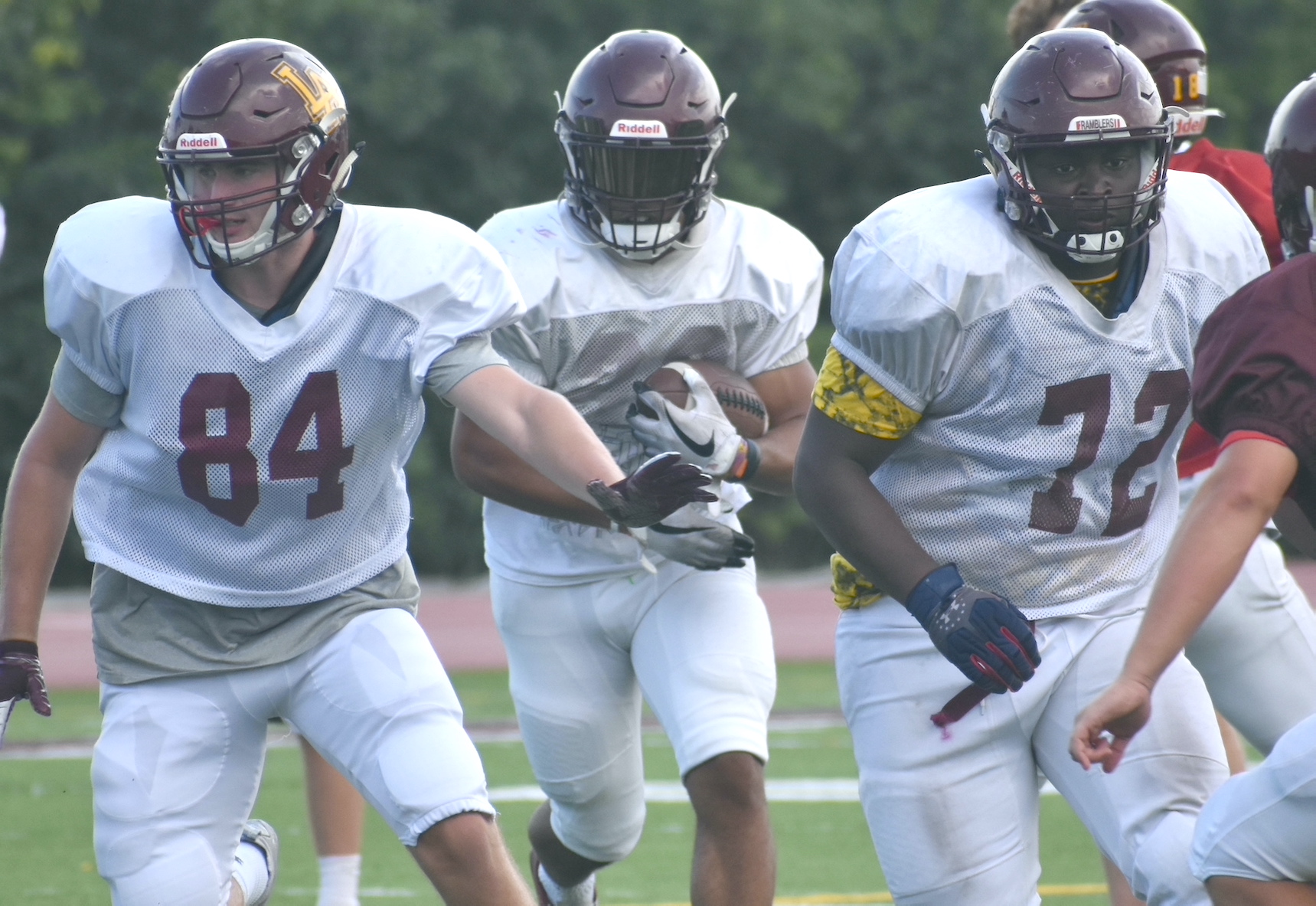 Loyola tailback Marco Santana (center) carries the ball behind his linemen during a practice on Wednesday, Aug. 18, in Wilmette. | Photos by Joe Coughlin/The Record North Shore

After concluding an unprecedented and unconventional six-game spring football season on April 23 with a perfect record and +139 point differential (180-41), Loyola Academy is preparing to begin a conventional fall campaign on Saturday afternoon, Aug. 28, at Hoerster Field against Marquette of Milwaukee.

With no state playoffs in the spring because of COVID-19 restrictions, the Ramblers are striving to make this the academy’s third 8A state championship season since John Holecek became its coach in 2006, but already they are encountering adversity.

“We didn’t have a long offseason and the injuries are a concern,” lamented Holecek, who was voted Coach of the Year in the Chicago Catholic League’s Blue Division. “Last season we had 15 or 16 returning starters; now we have four.”

Foremost among the 2021 graduates is running back Vaughn Pemberton, the Chicago Sun-Times Metropolitan Player of the Year and the Blue Division’s Most Valuable Player. In rushing for 904 yards, he averaged 8.8 yards per carry, led the team in pass receptions with 10 and accounted for 15 of the 19 touchdowns the Ramblers scored during the spring season.

Also in the class of 2021 was quarterback JT Thomas, who completed 42 of 69 passes for 581 yards and four touchdowns.

LAST WORD: “Last season we had 15 or 16 starters. Now we have four. We didn’t have a long offseason and injuries are a concern.” — Ramblers coach John Holecek

But the backfield seems to be the least of Holecek’s worries. Senior running back Marco Maldonado was a significant contributor as both a sophomore and junior, and junior quarterback Jake Stearney gives the impression that he is destined to be a star-quality performer.

“I’m taking on more responsibility,” said Maldonado, who carried 53 times for 315 yards in the spring. “My biggest strength is my speed. I’m trying to balance that with strength and patience so I know the right time to accelerate. I know when I get going they won’t catch me.”

In the spring, as Thomas’ understudy, Stearney completed all three of his passes, throwing for one touchdown and running for another. An outstanding season with the Ramblers’ undefeated sophomore team augment Stearney’s credentials, and he feels he is “well prepared” for the challenges that await him.

“Jake has a really good arm but we don’t have any thoroughbred receivers,” Holecek said. “One we thought might be, Roger Simon, is nursing a knee injury and we probably won’t have him until October.”

The son of girls track team coach, ChrisJon Simon, caught eight passes for a team best 163 receiving yards in the spring season and then went on to excel in track and baseball, making him one of the most unique three-sport athletes in school history.

Another tight end who had a stellar season was James Kyle, who is ranked among the top 20 college prospects in the state but is following the advice of his doctor and won’t be playing this fall after blood clot problems put a premature end to his high school career last spring.

However, Kyle — described by Holecek as a “big time Division I recruit” — remained with the team as a co-captain, providing leadership and support.

With Kyle sidelined and Simon on the injured list, Holecek is counting on juniors Jack Parker and Jack Fitzgerald, son of Northwestern Coach Pat Fitzgerald, to make an impact at tight end.

Among the wide receivers, seniors Danny Collins and Charlie Mahon are expected to be Stearney’s go-to-guys.

On the offensive line the Ramblers have a pair of talented incumbents in co-captains Will Livingston and Jack Talanges, both of whom had to miss some practices because of injuries.

“I’m hoping to be ready for the Marquette game,” said Livingston, who is recovering from a shoulder injury. “The injuries are affecting our team but I think they also will be a problem for other teams because no one has had the time to heal that we usually do during the offseason.

“We have a lot of young guys and as we get closer to that first game they’re looking better and plugging our holes.”

Talanges has the same opinion.

“I’m looking forward to all these juniors, who are getting much better, to become part of a cohesive unit,” Talanges said. “Day by day and week by week we want to keep improving and make our team the best we can be. My goal is to go all the way to the state championship.”

On defense, the highest profile returnee is senior James Kreutz, son of former National Football League star Olin Kreutz and brother of Josh Kreutz, who is playing college football at Illinois after being one of the Ramblers’ best offensive linemen last year. James is moving from safety to inside linebacker, but he considers it to be an easy transition.

“Last season was my first time playing safety. Before that I always was a linebacker,” Kreutz said. “The big adjustment in going back to playing linebacker is making tackles four or five yards deep versus 20 yards. I’ll be making more tackles.”

Nate Van Zelst has graduated after excelling as a field goal/extra-point kicker and punter for three seasons but Holecek feels he has found a talented replacement in sophomore Mike Baker who “kicked as a freshman and was really good.”

One of the biggest voids confronting the Loyola coach isn’t on the playing field. Instead it’s the absence of an opponent for the second week of the season.

“There’s no benefit to having an off week,” Holecek told The Record. “We need to play someone — even if we lose we get playoff points. We haven’t been able to find anyone in the state of Illinois. We’ve been approached by Cathedral in Indianapolis, which always is a powerhouse, but that’s five hours on a bus getting there and we’d either have to stay overnight or bus home. And, like a lot of teams, they want a home-and-away deal for two years. The problem with a two-year deal is next year we might go to Ireland again (as the Ramblers did in 2012). That’s still a possibility.”

Last season’s team was one of the best Holecek had since coming to Loyola but COVID-19 restrictions interrupted his string of state playoffs every year since the outbreak. But Holecek told The Record he is going to do everything he can to make certain that doesn’t happen again.