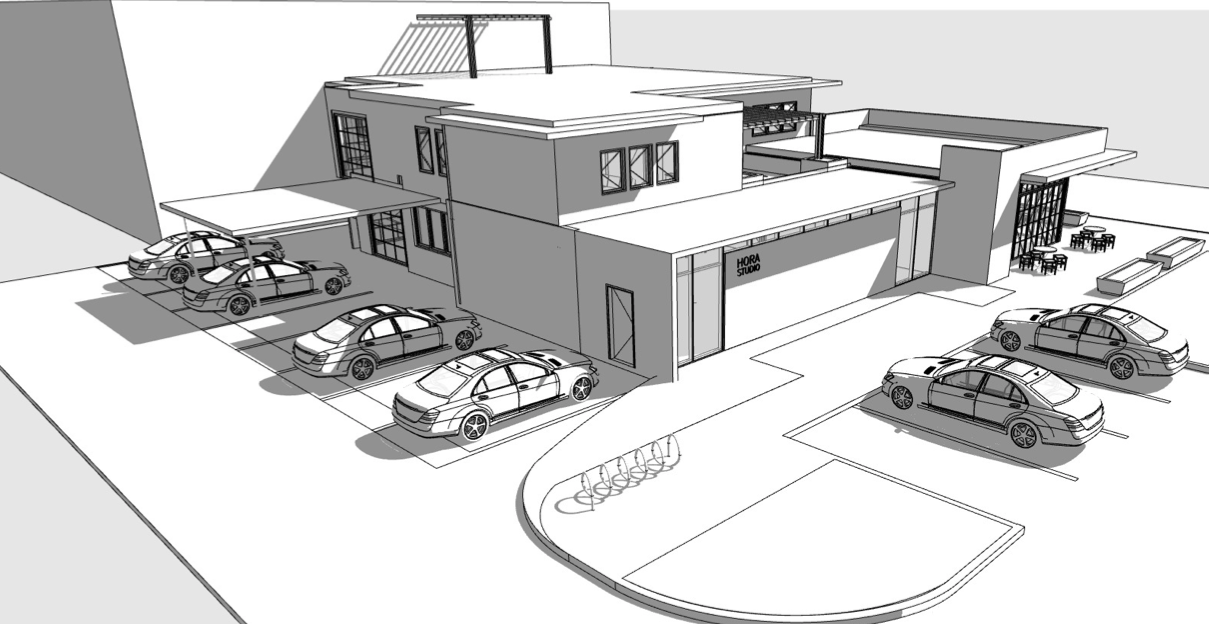 An updated rendering of the multi-use space that is planned for 500 Green Bay Road. | Image From Newlook Design Firm

After months of meetings, discussions and revisions, the Kenilworth Village Board unanimously approved a special use permit for a fitness center that is planning to occupy 500-510 Green Bay Road, but trustees made some changes first.

Since 2019, Practice Hora USA — a fitness studio currently located at 3520 Lake Ave. in Wilmette — has wanted to relocate to Kenilworth. In addition to the studio, the space will also house a coffee shop and an art gallery. The second floor will feature two residential units.

Kenilworth trustees discussed the special use for more than an hour at the board’s regular meeting on Monday, Aug. 17, with much of the discussion focused on the number of participants in Practice Hora’s classes.

During the meeting, Jerry Callaghan, an attorney representing Practice Hora, proposed increasing the number of participants from 10 to 15 during the 7:46 to 5 p.m. slot, saying “the project is feasible at 15, but it starts to drop off at 10. (Practice Hora owners) don’t know if it can be economically feasible with only 10 during those hours.”

He also asked about adding four parking spaces in the parkway on the south side of the property; although Callaghan added that was just a suggestion. Trustees took no action on adding the parking spaces.

Trustee Alison Winslow, who also serves on the village’s Building, Planning & Zoning Committee, said that “parking, parking, parking” has always been one of the main concerns with the businesses.

She said that early in the morning, there aren’t as many people parking on Green Bay Road, as most businesses have not yet opened.

Winslow also said that Practice Hora plans on offering programs for young people, and their space can accommodate them.

“That’s one of the real reasons why they wanted that higher cap in numbers,” she said. “The view is not that there would be multiple back-to-back classes of 31, either in the morning or the evening. It would probably be 31 maximum one class in the morning, one in the evening. Most days you would not have both at that size.”

Winslow said there’s a chance people who utilize the fitness center could also go to the coffee shop afterward, which could also have “a significant parking impact.”

Multiple trustees mentioned a previously conducted parking study; though it was completed in February and March of 2020, prior to the COVID-19 pandemic, and trustees were concerned that study did not paint an accurate picture of parking in Kenilworth.

“The original intent was to continue to update the parking study over time,” Winslow said. “With COVID, we weren’t able to do that.”

She added that several new businesses have opened since the study was done, and the parking that was generated from those businesses is not included in the study.

Additionally, Winslow said 31 was chosen as a cap from a “growth standpoint.”

But Trustee Peter Shadek said he was concerned that the board was over-allocating spaces to the business. He said if future or current businesses request parking spaces may not be available.

“Other businesses, and in fairness to them, are going to want access to parking as well,” he said. “I’m concerned that it would adversely effect other property owners.”

He suggested that they approve the special use permit for 21 spaces in the morning and evening, but leave room for the applicants to apply for reconsideration to raise the number of participants.

Trustee Amy Hannus agreed that there are issues with parking in Kenilworth.

“Plainly speaking, we have a parking problem at the end of the day,” she said. “And there is congestion already. That’s really where we’ve come to the numbers that we’ve come to. Just trying to manage congestion, safety, and it’s just realistic, what we’ve already observed.”

Trustee Tim Ransford put forth a motion that altered the morning time from 6 to 7:45 a.m. to 6 to 7:30 a.m., citing concerns from residents and trustees about traffic interfering with children going to school. His motion also lowered the amount of participants in the morning classes and evening classes from 31 to 21, but added language that will allow Studio Hora to reapply in the future to increase the amount of participants to 31 without having to go through the various committees it would have to go through, instead saying the applicant could go directly to the Village Board of Trustees.

The board unanimously supported Ransford’s motion.

Hannus said the community is excited about the prospect of these new businesses coming to Kenilworth.

“This is a really nice-looking building,” she said. “It would add, I think, a lot to our village. The functionality of the businesses, too — having a fitness center and coffee shop — are things, I think, our residents would like. And we’ve heard from them that they’re excited about it. We’re very excited. We’ve been happy to work with you.”

Village President Cecily Kaz agreed and praised the work everyone has done to get to this point.

“I think it really shows that this group is really trying to work together,” she said.