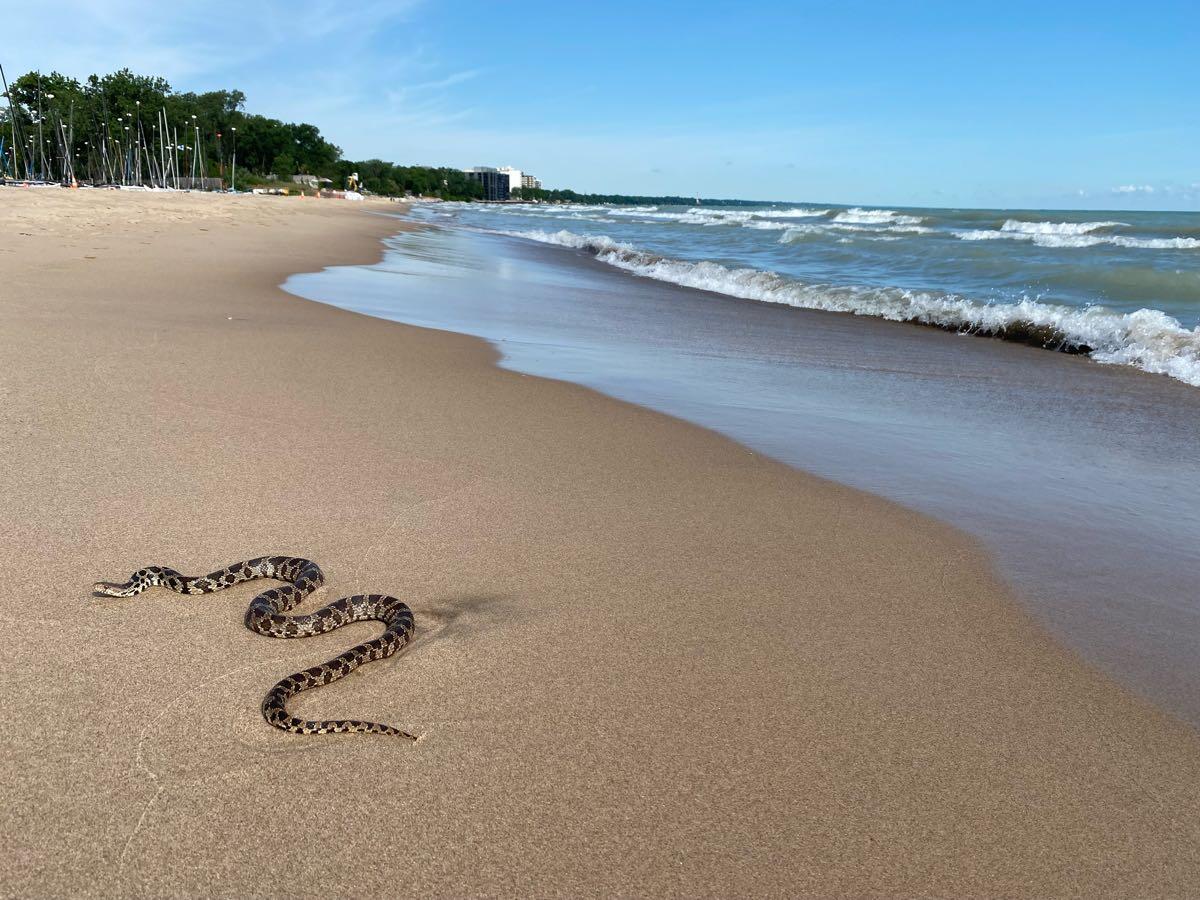 A western fox snake moves across the sands of Gillson Beach on July 9. | Photos Submitted by Duo Wang

A picture is worth a thousand words — but they aren’t always the right words.

Photographs of a snake slithering across Gillson Beach wrangled residents’ attention on social media in July. But those who saw the animal knew better than to be worried.

While the photos appeared to show a large snake, Wilmette Park District Lakefront Supervisor Ben Wozney said it was just about 2 feet in length and “maybe a half-dollar” in diameter. Others who witnessed the snake said it is maybe about 3 feet long.

Wozney said the harmless western fox snake was identified by a county biologist before his team relocated the animal.

“We followed what Cook County told us to do,” he said. “Put it back in the wild and keep it in an undisclosed location.”

Wozney said officials want to protect its natural habitat, which is “somewhere in the area.”

According to the Illinois State Museum, the western fox snake is not dangerous to humans, is native to the prairies of northern Illinois and is active by day through the summer.

The fox snake also furiously shakes the tip of its tail when stressed, leading some onlookers to believe it is a rattlesnake.

Wilmette’s Suzanne Martin was walking the beach when came across the snake the morning of July 9.

“When it was coiled up there, it looked like a piece of wood that washed up,” she said. “I was really surprised when whatever it was was alive.

She added, “It didn’t seem threatening or afraid of us. … It was cool seeing it. It was a pretty snake.”

Resident Duo Wang said she may have been the first to notice the animal and nearly stepped on it.

Her photos and video drew hundreds of reactions and comments on the social media site NextDoor.com.

“I have never seen snake so at ease with water,” said Wang, who recently moved to Wilmette from Colorado. “
… It did not swim away. It was just having a good time at the beach.”

Wong — like Martin, Wozney and Park District Executive Director Steve Wilson — said she had never seen a snake on the beach before.

Other residents who saw the snake alerted park district personnel who responded to the scene. Wozney said his team kept the public away from the snake while it was identified and then relocated it off the beach.