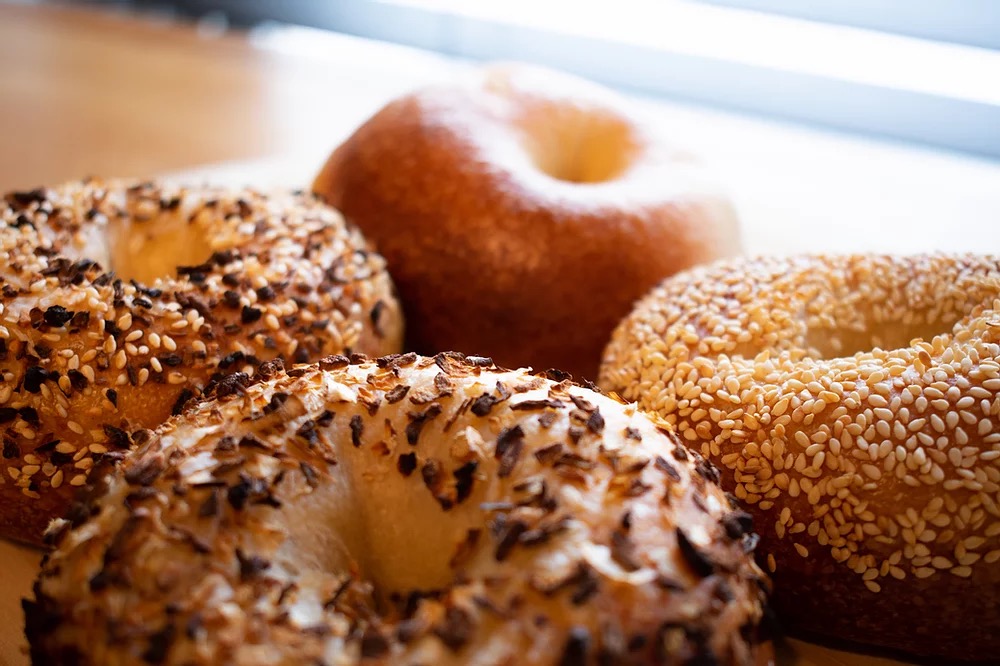 Boom Bagels is a pop-up shop ran by the Wise family, of Northfield. They currently run out of the kitchen at Temple Jeremiah. | Photos Submitted

Like so many others during the pandemic, Northfield resident Jonathan Wise invested his time into baking.

While many people sought after sourdough starters and learned how to make their own loaves of bread, Wise wanted to do something different, so he, along with his family, started making their own bagels.

Other people may have baked solely to cure their quarantine-induced boredom. But for Wise, his baking became a passion, and a shared interest throughout his family. After having friends and family enjoy their New-York style bagels, the family decided to start a business out of it, and not before long, Boom Bagels was born.

As their bagel production continued to grow, Wise and his son, Charles, realized they needed a bigger area to work in, and that’s when they partnered up with Northfield’s Temple Jeremiah.

Currently, Boom Bagels is running as a pop-up in the temple’s large kitchen at 937 N. Happ Road, Northfield.

“It’s got great facilities,” Wise said of the temple. “It’s a commercial, inspected kitchen, but because of the pandemic it wasn’t really being utilized. Since we weren’t opening a restaurant, we just needed a place to bake, it was a perfect match.”

Part of what Wise loves about the bagel-making process is how involved and complicated it can get.

The work week for Boom Bagels begins with a family meeting on Fridays after they’ve received orders on their website on Wednesday.

Wise said it takes him and his family two days to make their batches of bagels, as they go about their process in the “old-school” way.

They spend the first day preparing and rolling their dough, as well as allowing time for the bagels to rise. The second day consists of the crucial step of boiling the bagels and then baking them.

The result? It’s a “perfect balance between a crisp, crunchy crust and a dense, chewy inside,” according to the Boom Bagels website.

“It’s really not easy,” Wise said. “To really perfect it and do it consistently each week took a while.”

Jonathan Wise is primarily in charge of the process of turning ingredients into dough and dough into bagels, his son Charles, a student at New Trier High School, is in charge of the bagel’s flavors.

The bagel flavors include plain, everything, poppyseed, cinnamon raisin, chocolate chip and more.

In addition to hand-making their own bagels, Wise and his family also make their own cream cheese in a variety of flavors, like raspberry mint, sriracha and more.

Wise just began his bagel business in the past year, but said he has worked in the food service and luxury hospitality industries for more than three decades.

“It is so much fun,” Wise said. “I think if I was doing it seven days a week, and by myself, it’s a lot of work. We have scalability and we have a couple of people who volunteer because they want to learn how to make bagels.”

The business is always looking for more volunteers, he added.

Merchandise for Boom Bagels’ loyal fans will be available soon, Charles Wise said. But in the meantime, bagel orders can be made through the business’ website on Wednesdays and picked up on Sundays.