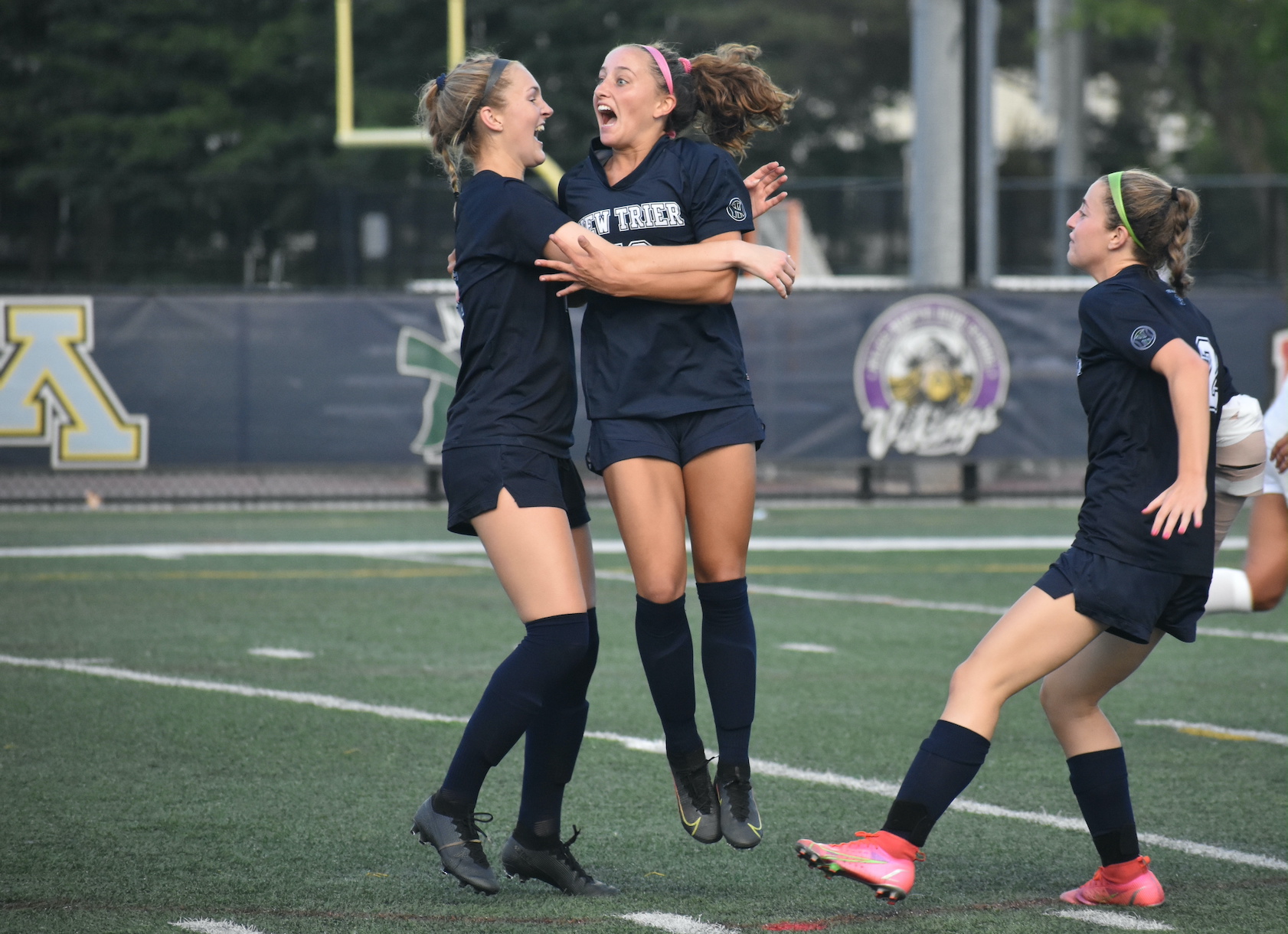 Head, shoulder, knee or toe? From the sideline, it wasn’t clear, and to be honest, Morgan Fagan isn’t exactly sure.

When a cross came her way late in the first-half of the sectional championship, Fagan was much more worried about finding the net rather than which body part she used to do it.

“I think it was my shoulder. I just ran right through the ball hoping it hit off some part of my body and it did,” she said. “It was my chest or shoulder or something like that.”

The ricochet zipped low and right past the charging goaltender and into the net to give New Trier the all-important first goal in its 2-0 win over Evanston in the sectional championship Friday, June 11, in Northfield.

The scoring sequence was set in motion by Kate Dobsch, who fed a streaking Alex Wirth down the right sideline. Wirth collected and served a cross toward the center of the box for Fagan.

“I knew Alex had been crossing all game so she was going to touch and cross it in,” Fagan said. “And I knew I only had the one girl on my back to beat, so I knew I had to run a diagonal toward the near post to get a touch on that cross.”

The goal was all the New Trier defense needed, as it pitched another postseason shutout — a hallmark of the Trevians recent playoff success.

New Trier has outscored opponents 12-0 in this postseason.

It was the third match between the North Shore rivals this season. New Trier won the first early in the season, and the teams battled to a draw in May.

On Friday, Evanston had nary a dangerous scoring chance in the first half and only a handful throughout the match.

“I think just winning a lot of the balls out of the air is really important to us,” said Mia Sedgewick, a senior defensive back. “Also communication, we’re really big on that, especially because going into this we knew the formation they’d likely have.”

On the other hand, the Trevians had the pressure on early.

New Trier coach Jim Burnside said while it’s always important to keep the ball in the other team’s side of the field, his team made it a gameplan.

“They connect on real quick passes, so it’s kind of hard for us to transition to our defense,” he said. “So we tried to put pressure on them so we could try to possess in their half of the field.”

In the second half, Evanston came out firing.

The ‘Kits junior midfielder Adriana Merriam ripped a series of long-distance shots on goal within the half’s first 15 minutes. But New Trier’s goalkeeper Wynne Hague was up to the challenge.

In the meantime, the Trevs had some dangerous counter attacks, but found the net off a set piece.

Jenna Birdsell sent a 30-yard free kick toward the near post where Dobsch placed a slick touch on it and slid it by the Evanston goalie for the 2-0 lead.

Burnside said it’s been weeks since the two played so the on-the-field products will be different for each team.