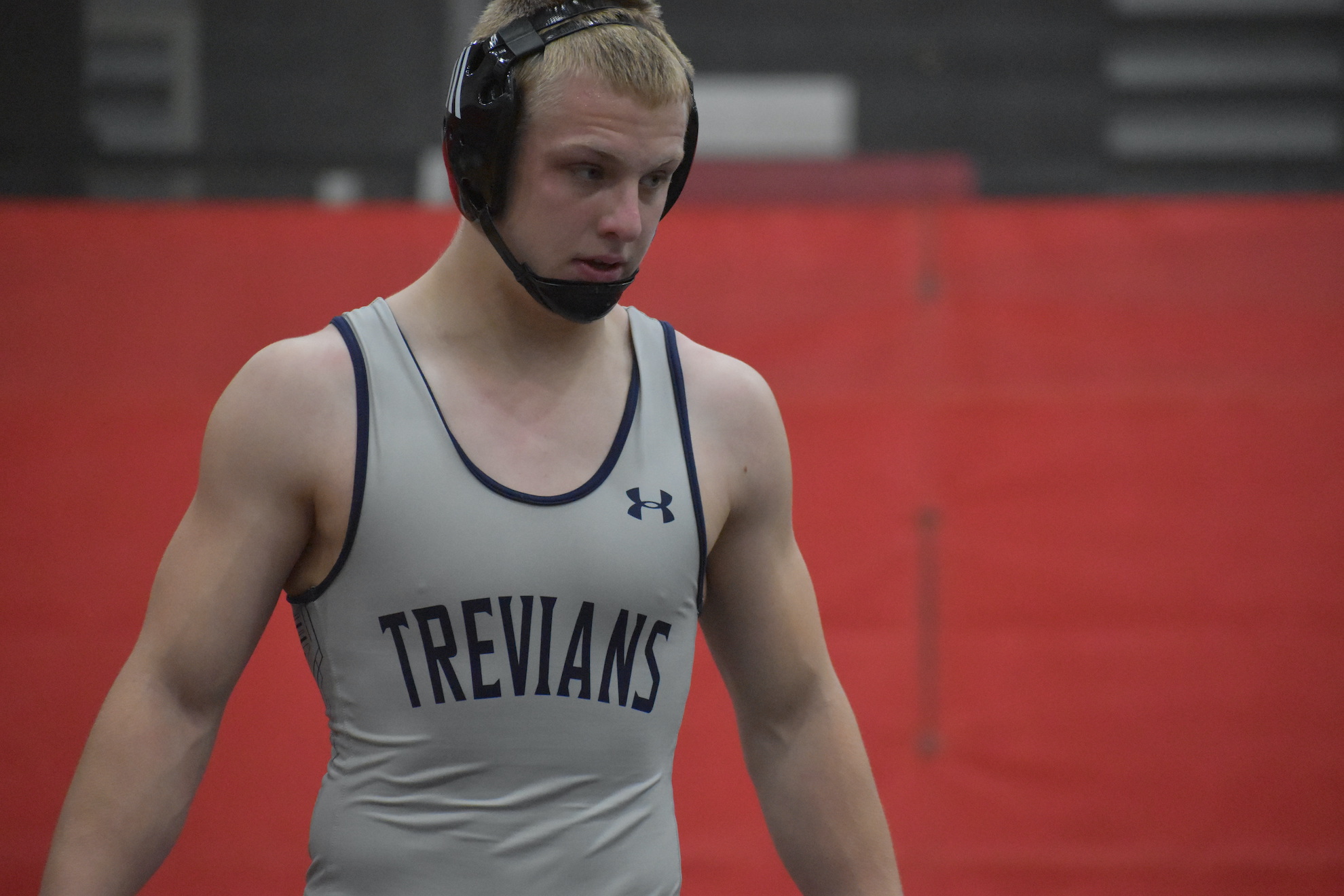 Liam Cummins wrestled at 165 for the Trevians this season.

Liam Cummins is a senior wrestler, who was also an All-Conference defensive lineman and competed with the powerlifting club. Cummins had a 10-5 victory over his Maine South opponent on Thursday, June 10.

Talking about wrestling, do you have any prematch rituals?

I just like to bounce around and get loose and shake out my legs. I have really big quads so I like to let them shake a little, like as a flex. I’ll listen to the music on the way over and then just jumping around and getting ready to go right at this kid.

What are your plans for next year?

As of right now, I’m attending Colorado State University. They have a wrestling club that competes at what would be comparable to a Division III conference. I think I’m actually going to pursue that. I gave up wrestling after freshman year, because I didn’t like it anymore and it wouldn’t have been far to coach (Marc) Tadelman or anybody else if I was on the team. Now, that I re-entered it … I think I’ll like that club wrestling environment there.

What is your favorite thing to do outside of sports?

I love being with my friends, two good friends Jake Meiners and Liam Fraleigh. Anytime we get together it is a good time and it doesn’t take a whole lot of us.

You are on the smaller side for a defensive lineman. What made you so effective?

I didn’t play football freshman year. I thought I’m not that guy, I’m not big enough. Sophomore year I started working out with the (defensive backs) and receivers and I just don’t get it, ya know. I went to the line coach, and asked, ‘Can I just get in here? This is what I do.’ And I kind of had a breakout year. I had 15 sacks sophomore year and my junior year I got out there and was able to hang. I can attribute that to … lifting a lot of weights, having a lot of grit and having fight inside you not to get your ass kicked.

What is your dream job?

If I could do anything, I would probably have a big piece of land and a congregation … running a huge farm where people could be free and be happy. Something like that. I used to want to be a big, rich (guy) but as the days go by, moments like tonight and good experiences, I just want something where I could just be happy and be in charge too — because that’s part of having a job, right?

What do you want to study at Colorado State?

Health and exercise sciences. I just love lifting weights and exercising. I love what it can do for people. Exercise is a very big field. … The broadness of that attracts me.

If you are in Walgreens with a couple bucks, what are you buying?

A box of Charleston Chews and a strawberry banana BodyArmor.

If you could try another sport, what would it be?

Probably hockey. I played lacrosse when I was in middle school and it was fun. Hockey and lacrosse I can compare because you can hit people, but in hockey you can people a lot harder. To this day, I’ve never gotten in a physical altercation. In a hockey game it seems reasonable and pretty safe.

What is something people do not know about you?

I read the bible every single day. I’m reading the bible front to back. I got it for Christmas.

How would you summarize this wrestling season?

What happened was that we lost that game to Maine South (in football), and I told my dad, ‘I’m going to join the wrestling team.’ He said, ‘OK, but it’s on you. I’m not making you do this. … I went to a practice — and this is still during football practice going on — and coach said, ‘If you’re going to do this, you’re in.’ I got my ass kicked by everybody I wrestled and was dog tired. Over the season, I got better and better and cleared off the rust I had. Out there tonight (June 10) I went six minutes and got a win. It was a journey.