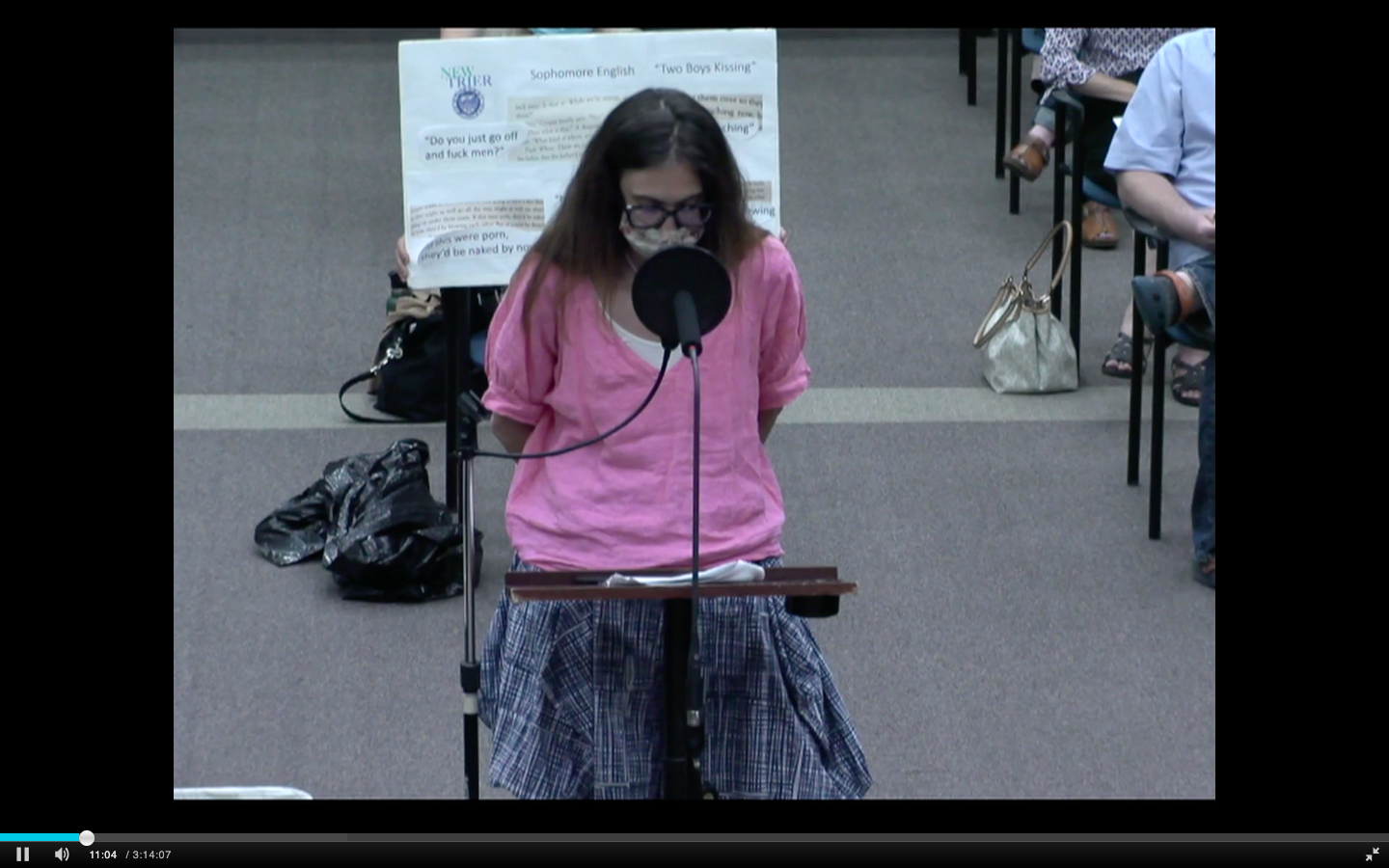 Dr. Carrie Mendoza speaks out against the novel "Two Boys Kissing," while another guest holds a sign containing excerpts from the books, during the New Trier High School board of education meeting on Monday, June 7.

A novel that has been on New Trier High School’s reading list for six years drew the aim of a subset of district parents on Monday, June 7, during the monthly board of education meeting.

District officials doubled the standard public-comment time (from 30 to 60 minutes) to hear from opponents and proponents of “Two Boys Kissing,” by David Levithan, a book included on the reading list for some sophomore students.

Ten of the 23 speakers who addressed the board about the award-winning book assailed mature content within the text, which includes descriptions of sexual encounters and illicit relationships.

The remaining speakers, who included parents and current and past students, celebrated the novel for its portrayal of gay principal characters and complicated cultural themes.

After the hour of public comment, district administrators and board members defended “Two Boys Kissing” and the educators who chose the reading selection.

CLICK HERE TO VIEW A RECORDING OF THE MEETING

“Two Boys Kissing” is a young-adult novel that was published in 2013 that tells the unconnected stories of eight gay teenagers over two days, while two of them try to set the world record for longest kiss. The book earned a series of literature honors, including inclusion on the prestigious National Book Award Longlist.

Discussion of the book as part of New Trier’s curriculum was not on the agenda for the evening; therefore, the board of education did not take action related to it.

It is unclear why “Two Boys Kissing” garnered the attention six years after being selected for the school’s curriculum; however, the local, conservative parent group New Trier Neighbors — which advocated against New Trier’s civil-rights-based Seminar Day in 2017 — sent out a mass email on May 25 criticizing the book and suggesting that parents read passages at school board meetings.

“Is it time to start reading at New Trier school board meetings the materials they assign to our kids?” the email asks in conclusion.

Multiple speakers on Monday evening read aloud explicit excerpts from the book and another guest held up a posterboard — perfectly in-frame with the camera that was recording and streaming the meeting — featuring blown-up clippings from the novel.

Another speaker against the book exited the meeting while shouting to the administration, “You call yourself an educator? Shame on you.”

From the other side, numerous speakers pointed out that other school-assigned literature — such as “Catcher in the Rye” and “Romeo and Juliet” — also features mature language, sexual encounters and controversial themes.

“It boils down to fear,” she said. “Why is this book controversial? Would you think it was controversial if it were a boy and girl kissing? Why are you so fearful of kids learning and accepting that love is love?”

Current and former students also shared their voices with the board, emphasizing the importance of the book’s themes and messages for the school’s LGBTQ community.

Victoria Chan, a recent NTHS graduate sporting a rainbow scarf in honor of Pride Month, said she wishes she had read “Two Boys Kissing” as a sophomore and is happy for the “hundreds of queer students” at New Trier who do get to read it.

“It would have helped me a lot to know that queer relationships were not a taboo thing and not something to be ashamed about,” she said. “It would have opened conversations and dialogue about issues among queer people that everyone can learn from no matter their sexuality.”

Laura Templin, of Wilmette, said that she believes opposition is not anti-LGBTQ, but instead opposes the graphic nature of parts of the book. She asked the board to speak with more parents.

“There is such a wide variety of opinion on this book; I think it would great if you could take it a step further and investigate and do some surveying,” she said.

Reading assignments are chosen by faculty, not the board or administration, according to Sally, who said it is a professional courtesy that has long been in place.

English department coordinator Sarah Gompers and chair Ed Zwirner also were among the speakers and further explained the choice of “Two Boys Kissing” and how it supports “underrepresented voices.”

Gompers reminded the board and crowd that the text is handled with care.

“An English curriculum is not just about the titles of the text we choose, but how we teach these texts. … We are prepared to support every reader as they encounter potentially challenging works for whatever the reason,” Gompers said. “Literature is mature and unflinching in its portrayal of the world. All great literature challenges preconceived notions.”

After public comment, Gompers’ words were backed up by Sally and Peter Tragos, assistant superintendent for curriculum and instruction.

Tragos said that reading explicit excerpts without context is “intended to mislead people into believing the whole book is [graphic],” but that conclusion “represents a misreading and misunderstanding of the novel.”

He credited New Trier’s English teachers with the capacity to guide students through the scenes with care.

“The real missing piece here is the teacher,” he said. “… No teacher would read this scene in the way you heard it tonight.”

Board members Jean Hahn and Kimberly Alcantara said they read the book over the weekend and were surprised to hear the commentary from those who opposed it.

“I was starting to wonder if we read the same book,” Hahn said.

Sally said he would work with parents who have concerns on the book, but emphasized its importance to the curriculum and to the school’s dedication to inclusivity.

“We support our LGBTQ community. We embrace them, we care for them,” he said. “Ensuring they are visible in our curriculum is something that we stand by. All marginalized identities are ones that we work to show so that all our students feel like they belong at New Trier, and that is a main objective for us as a public school … for all students to be ready to move out into the world.”