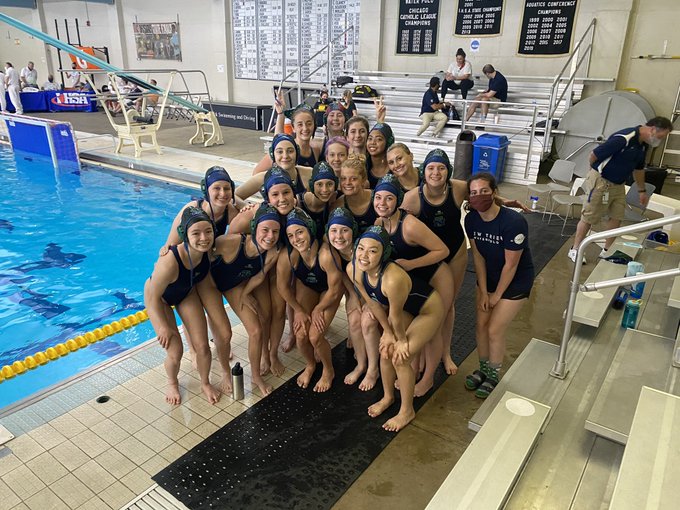 The New Trier girls water polo team bested the York Dukes 10-8 on Wednesday, May 26, to earn a trip to the state semifinals. | Photo submitted

New Trier advanced to the IHSA state semifinals with a close win over the York Dukes on Wednesday, May 26, in Oak Park.

Charlotte Dellin finished off a pinpoint pass from Mia Sedgwick to give the Trevians the only goal they needed to beat the Titans on Tuesday, May 25, on senior night in Northfield.

The Ramblers continued their winning ways by earning their ninth-straight victory over Mother McAuley on Tuesday, May 25.

Eun Hae Lillig scored a late penalty kick to help the Raiders earn a close win over Francis Parker on Tuesday, May 25.

Laura Strenk had two goals, while Mary Storino and Maeve Gibbons also found the back of the net during Regina’s road win on Saturday, May 22.

Caroline Finnigan, Anna Marshall, Ceci Troglia and Sybil Evans all netted goals for New Trier as it blew by the Wolfpack on Friday, May 21.

Morgan Van Horn crushed two home runs while driving in four runs to lead the Ramblers past St. Laurence on Tuesday, May 25.

Emma Delaney’s walk-off double in the seventh allowed the Panthers to earn a comeback win against De La Salle on Wednesday, May 26.

Sophie Hoffman finished 2-for-4 with a single, a double and a run scored. Kenzie Johnson was 3-4 with two RBI and two runs scored

The Wildkits outlasted the Trevians in a high-scoring affair on Tuesday, May 25, in Winnetka.

KK Raymond, Mackenzie Barry and Bella Mulvaney all delivered three-hit performances while Morgan Van Horn plated five runs during the Ramblers’ victory over the Friars on Monday, May 24.

KK Raymond and Mackenzie Barry each smacked two hits by Loyola could not overcome a four-run fifth inning from Montini on Friday, May 20.

Connor Lasch belted hit his first home run of the year and Roger Simon earned the victory on the bump as the Ramblers rocked the Warriors on Tuesday, May 25.

The Hawks plated 11 runs to top New Trier in the first of two meaningful late-season CSL South matchups on Tuesday, May 25.

The Raiders shut down Elgin while scoring 10 runs in a victory on Tuesday, May 25.

Alex Calarco crushed a home run and drove in three runs and Brenden Stressler had two RBI to pace New Trier’s offense during its three-run win over the Dons on Friday, May 20.

The Trevians remained unbeaten with a dominant win over the Hawks on Wednesday, May 26, in Northfield.

The Ramblers topped Grayslake with a well-rounded performance on Wednesday, May 26, in Glenview.

New Trier bested rival Evanston with a 12-goal win at home on Saturday, May 21.

Loyola bounced back after a tough loss to rival New Trier to earn a win over the Blue Devils on Friday, May 20.

Caroline Smith made several key saves while Ellie Lazzaretto, Maley Starr, and Adrienne Leone netted key goals during Loyola’s win on Wednesday, May 26. The win pushed the Ramblers record to a perfect 16-0

The Panthers dropped a close game on the road on Wednesday, May 26.

The Huskies proved to be no match for the Trevians as New Trier scored early and often during their Tuesday, May 25, win.

The Wolfpack bested New Trier in two sets on Wednesday, May 26.

The Ramblers fell short against the Mustangs but still earned a share of the CCL Blue Division on Tuesday, May 25.