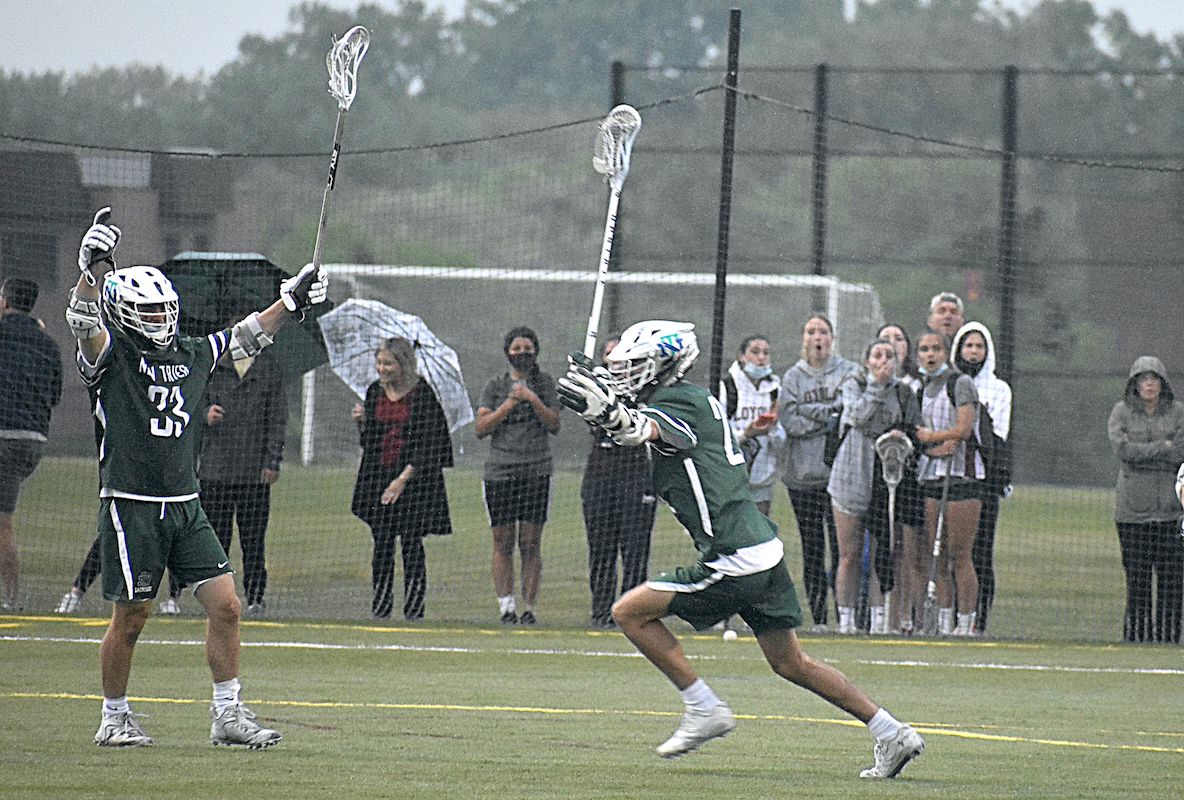 Adrenaline-infused, Hackett just emerged from a scrum of screaming teammates and fired-up classmates who witnessed the junior’s overtime heroics that gave New Trier a 9-8 win over host Loyola Academy.

It was difficult to concentrate.

“I am feeling great right now,” Hackett said. “My teammates kept saying this is what you dream of. It is exactly one of those moments you want to be in. And it just happened.”

In New Trier’s first overtime possession, Hackett wasted little time beating his defender to the inside where he found enough daylight to fire a shot that skipped into the back of the net.

The goal completed New Trier’s come-from-behind rivalry win on Tuesday, May 18, in Glenview, where the Trevs were once down 5-1.

“It’s huge,” Hackett said of the comeback. “This is our rivalry. There are a lot of people here. This is one of the best moments of my life.”

Despite the overcast sky and intermittent showers, hundreds turned out to witness the classic lacrosse battle, the first for the two neighborhood rivals, both of whom came into the match unbeaten, in two years.

The attendees filled the parking lot to its capacity. Prior to the opening faceoff, school officials had to turn away cars at the Munz Campus gate, snarling traffic on Johns Drive.

The home crowd enjoyed a Rambler-friendly start, as three unanswered Loyola goals — from Reid Walsh, Will Maheras and Patrick Reilly, respectively — in the second quarter had the hosts out to a 5-1 lead.

New Trier, however, got back in the game with a quick two-goal burst courtesy of Jesse Shapiro and Ollie Montgomery.

That was a big moment, according to Loyola coach Rob Dwyer.

“I think there were a couple clears we didn’t have that gave them momentum, went from 5-1 to 5-3,” he said. “I thought that was a big point.”

Maheras added a clever wrap-around goal with time expiring in the first half, giving his team a three-goal lead going into the break.

But New Trier’s defense took it from there.

“We still have a lot to improve but we responded in the second half,” New Trier coach Tom Herrala said. “We talked about it at halftime: It’s 6-3; this is a game we can come back in.”

Herrala also credited senior goalie Brian Kaskey, who had a number of big saves throughout the contest.

In the third quarter, he and the Trevs held the Ramblers scoreless as the lead was trimmed to one, 6-5. It was again Shapiro and Montgomery who found the net

A fourth-quarter rocket from Shaprio tied the game at 6-6, then the teams traded tallies the rest of the way to find their way to 8-8.

Dwyer said New Trier’s possession limited what Loyola could do in the second half.

“I think they were winning face-offs at the start of the second half, so we never really had the ball,” he said. “We may have gotten one or two and one empty possession so it was a big deal. As usual, the games go back and forth with us. It’s what you expect.”

Each team had final-minute possession, but each turned the ball over to set up a golden-goal overtime and Hackett’s game winner.

“That’s one of our plays, a dodge from the midfield,” Herrala said of the final goal. “He can either pass or shoot, and he was able to beat his guy — he’s the fastest guy on the field ya know — and when he got to the middle of the field, he was able to finish.”

New Trier and Loyola seemed destined for another dramatic playoff showdown in a matter of weeks. Since the IHSA has taken over the sport’s postseason, the teams have split state titles, with New Trier beating Loyola on the way to a 2019 crown and the Ramblers besting the Trevs on the way to their title in 2018.