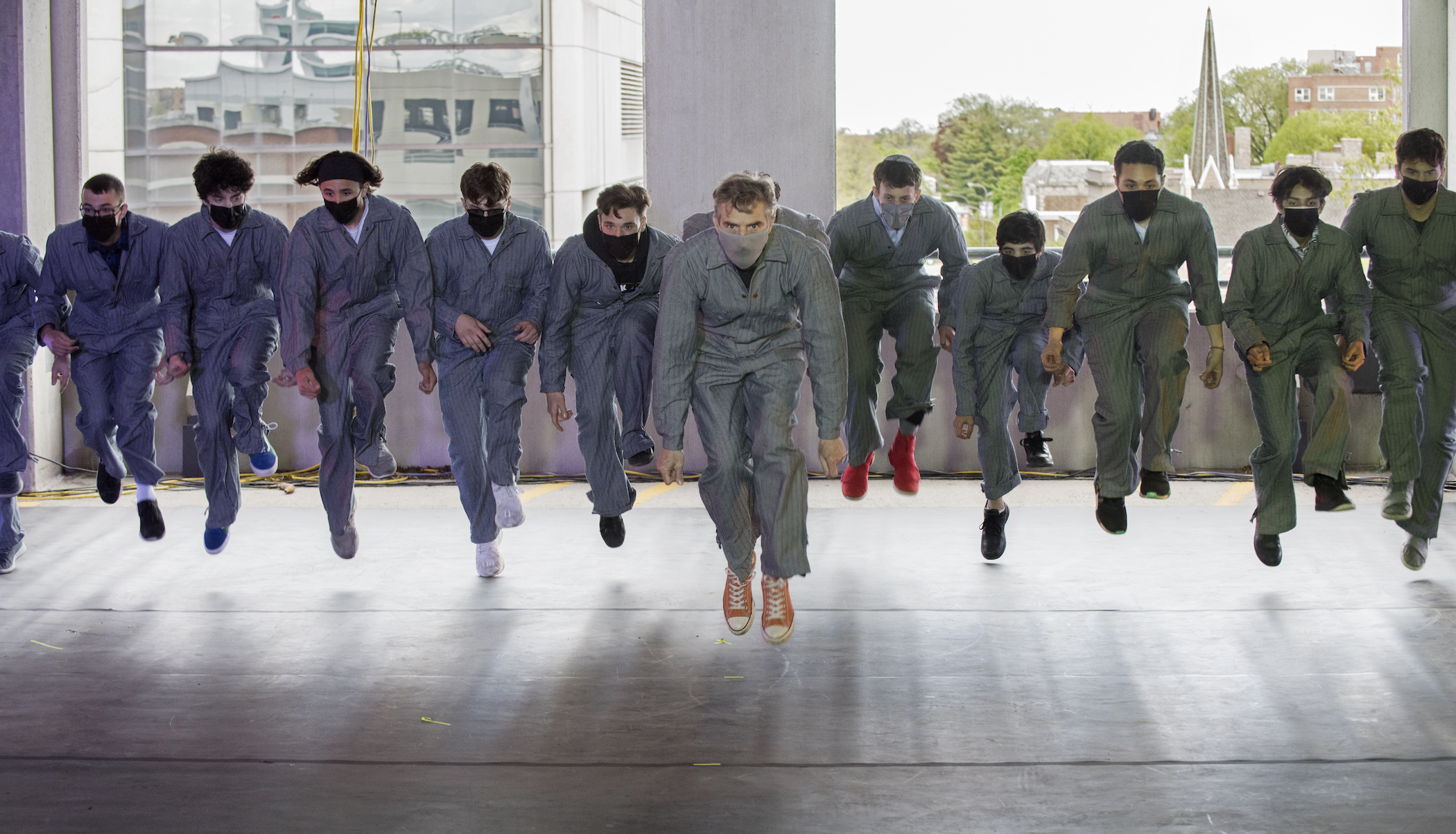 New Trier Menz Dance coordinator Chris Rutt leads the group in the finale of its annual show May 7 at an Evanston parking garage. | Photos by Lois Bernstein/The Record

A parking garage may seem like a far cry from a glamorous theater, but for New Trier’s Menz Dance it was the perfect setting for its annual show on Friday, May 7.

The group performed two consecutive shows at a City of Evanston parking garage at 1800 Maple Ave., deciding to relocate the show from the high school to avoid another cancellation due to the pandemic.

“This is the first time New Trier ever had a venue like this,” said Chris Rutt, Menz Dance coordinator. “We’ve had outside performances, sure, but not like this.”

It was important for Rutt, who has taught dance at New Trier for 20 years, to host the annual concert for a variety of reasons — one being that this is his last show before retiring at the end of the school year.

“I have a great group of guys. I told them about my concept (for this show) and how it would be great because it’s outside and covered,” Rutt said. “I really had a loose idea of what I wanted to do, but they pulled it together.

“Once they were on board, we were coming up with all these crazy ideas.”

Rutt told The Record he had to jump through many hoops in order to host the show at the garage, including gaining approval from the high school, the garage company and the city’s Parks and Recreation department, not to mention he had to research and order a Porta Potty for the day (a first for Rutt, he joked).

The night before the show, Rutt and his colleagues, Johannah Wininsky and Brent Roman, set up the space for six hours and hired security to watch it overnight. The next morning the dancers reported to the garage for a 13-hour day.

Friday evening brought the culmination of Rutt’s idea and the dancers’ hard work in two performances.

The shows took on an “FBI theme” to capture the men of “funk, theft and general mayhem,” the group’s flyer comically described. There was a through line, Rutt said, or a connecting theme, as a briefcase traveled in and out of the dance numbers.

“[The briefcase] had multiple purposes; sometimes it was a case of funk, other times it was used as a campfire to tell a story,” he added.

All of the dancers, including several alumni guest dancers, wore coveralls to go with the car theme in the garage. There was also a striking prop — a 1964 Ford Galaxie — that at one point was a close backdrop for a hand-balancing routine.

“I mean, the show started with a muscle car driving right past the audience,” Rutt said about the Galaxie. “It was like out of a movie. It all fit together so well.”

There were 50 tickets sold per show, limited because of social distancing and capacity limits, and 10 cars were allowed to park and view the performance from their vehicle.

If you missed the show, there will be plenty of opportunities to catch it virtually after it is shared on New Trier’s Dance Division website by the end of the month.

“Neither I nor they will forget this show,” Rutt said.