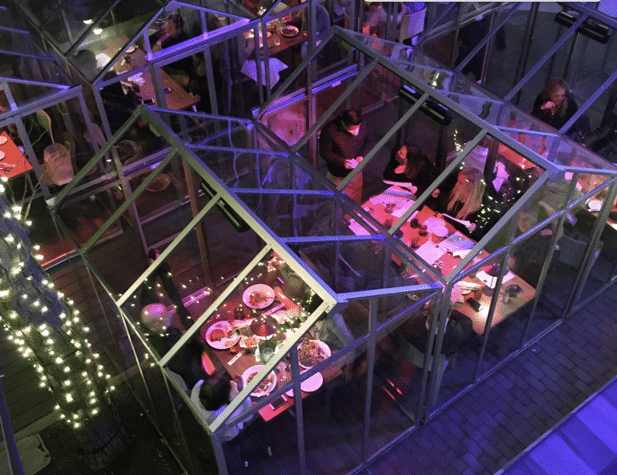 Glencoe restaurant Guildhall is planning to continue the use of its outdoor greenhouses during the summer. | Photo courtesy of Guildhall.

Outdoor dining will be back in full force this summer in downtown Glencoe.

According to plans submitted to the village, Hometown will remove its temporary greenhouses in front of the restaurant at the end of this month. The restaurant received approval for expanded sidewalk seating this summer.

Glencoe’s Assistant Village Manager Sharon Tanner told The Record the restaurant applied to modify and use one of the existing greenhouses as a kiosk space.

Representatives of the downtown establishment Guildhall submitted plans to continue the use of greenhouses on Vernon Avenue, according to officials.

An original request from Valor to construct a tent in the Village Court parking lot that mirrored what it had in 2020 was met with negative recommendations from officials because of “negative feedback” they received from nearby businesses.

Updated plans from Valor were met with a more favorable review from trustees at the April meeting. The restaurant will now use five parking spaces on Vernon, which required a licensing agreement with the village, for the installation of a tented dining area. Additionally, it plans to use expanded sidewalk seating, similar to what it had in place last year.

“I think this is a good plan and it looks like it will work for both Valor and the residents of Glencoe,” trustee Barbara Miller said.

Tanner said there is no set date when the agreements will expire and that village officials will work with restaurants to determine that.

By Martin Carlino | 3 days ago

By Martin Carlino | 5 days ago