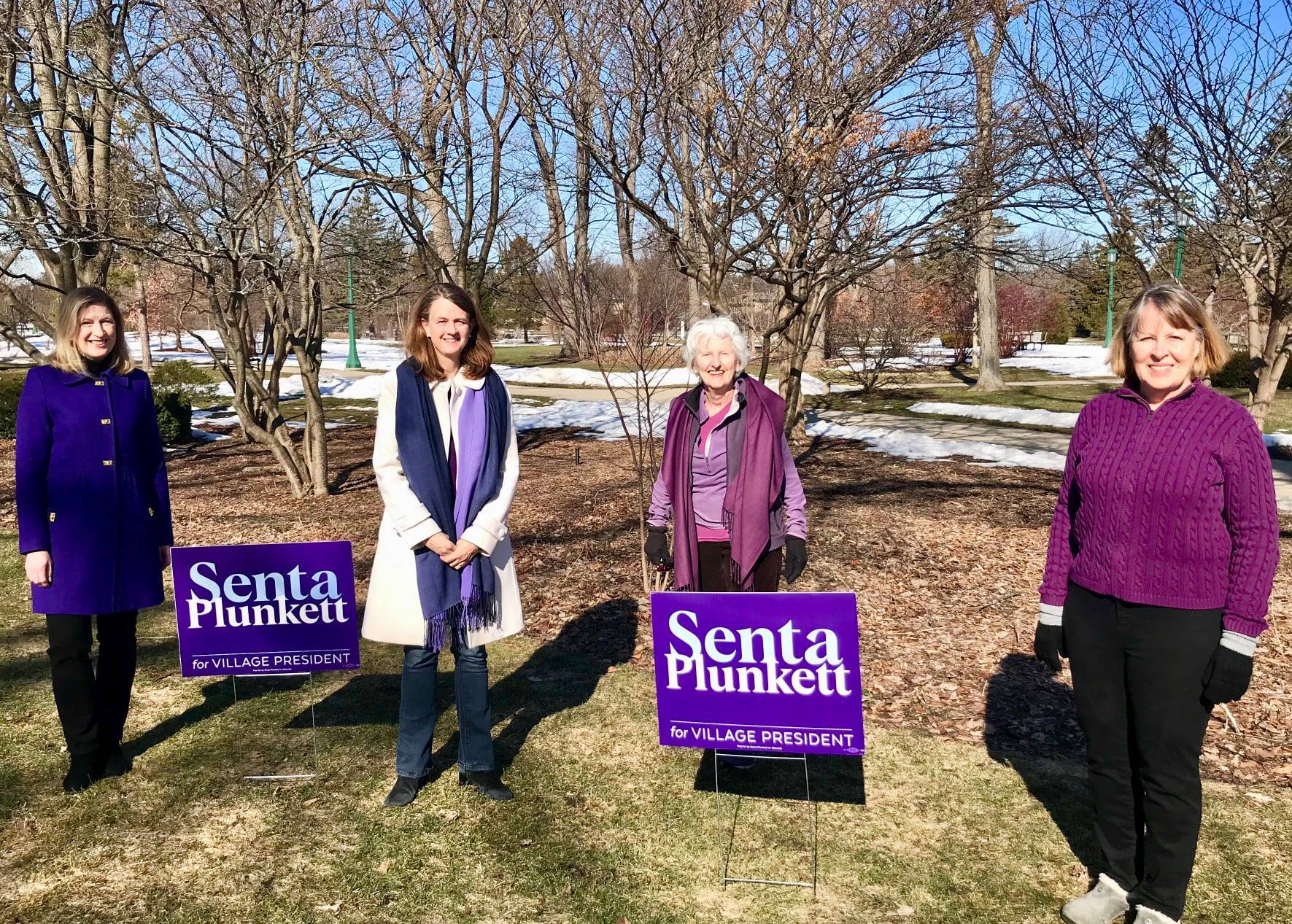 With all 22 precincts reporting, Plunkett captured 2,807 votes, or 59.24 percent of the 4,910 votes counted, compared to Joel Kurzman’s 1,931 votes, according to unofficial results from the Cook County Clerk’s Office.

The tallies include early voting and any mail-in ballots that arrived prior to Election Day.

“Obviously I’m really happy,” Plunkett said. “I’m just thankful for all the people that worked hard to support me. It’s a really busy time in Wilmette. So many people put themselves out there. It’s not easy to do. I’m thankful for all the support and I hope any of the candidates who did not win will find a great spot to serve in our community.”

Plunkett is amid her second term as village trustee, a position to which she was first elected in 2015, and will ascend to the village president’s chair in a couple weeks.

Kurzman completes his first term as trustee this year and will roll off the board if the election numbers hold. Kurzman did not return a message from The Record.

The last and only female village president in Wilmette was Nancy Canafax from 1997-2005. Canafax offered her support to Plunkett on the campaign trail, and Plunkett made sure to honor her trailblazing.

“I think that all our boards and commissions should reflect our community,” she said. “To that extent, there should be more of a handoff in terms of men and women and diversity as well. … I am thankful for Nancy Canafax. When she did that 24 years ago, it was very impressive and I’m excited to go forward and I’m sure there will be many more after me.’

She said it appealed to voters “to have a campaign that stresses economic development, but at the same time, has a keen interest in environmental sustainability and affordable housing and getting our residents involved in the community and bringing more diversity to our town,” she said. “So I think it was a combination of all those things.”

Voters tab Dodd, Sheperd and Gjaja for Village Board

In the most tightly contested race in The Record’s coverage area, Wilmette voters have seemingly elected two new candidates and one incumbent to the Village Board, according to unofficial election results from the Cook County Clerk’s Office.

With 22 of 22 precincts reporting, incumbent Kathy Dodd, and newcomers Justin Sheperd and Kate Gjaja are projected to earn seats on the board.

In total, five candidates ran for the three seats that were up for election this cycle.

Mail-in votes received after Election Day still must be counted, according to the county clerk’s office.

Dodd said she is “excited to be the No. 1 vote-getter,” adding she “feels like that reinforces all of the hard work that the village board has done.”

“I want to thank all of the voters who voted for me,” she said. “I’m excited to be reelected and I’m excited about all the work the village has done over the past four years. I’m hoping to continue the momentum that we have.”

Sheperd is currently a member of the Wilmette Plan Commission while Gjaja is a longtime community volunteer.

Newcomers find way to top of 9-person Park Board election

The Wilmette Park District Board of Commissioners will welcome fresh faces after a large field was whittled down on election night.

A whopping nine candidates ran for three seats on the board, and newcomers Allison Frazier (2,379 votes), Patrick Duffy (1,754) and Kara Kosloskus (1,668) appear to have bested the field with all 22 precincts reporting, according to unofficial tallies from the Cook County Clerk’s Office.

Just behind Kosloskus is the field’s lone incumbent Bryan Abbott, a two-term board member who collected 1,447 votes, or 12.07 percent of the 4,906 votes cast.

Frazier said she was “thrilled” to be the top vote-getter in her first bid for public office.

“I think people were excited to hear that a person with young children was willing to take the time it,” she said. “It is a job that requires time and not every parent or guardian of young children can make that time.”

She attributed her total to her message of being a voice for all generations: children, parents and grandparents.

During her campaign, Frazier — who said she is known to visit park district facilities up to five times a day — pointed out she would be the only Park Board commissioner with children under the age of 9.

The victory was “still sinking in” for Kosloskus, who said she woke up Wednesday to numerous congratulatory messages on her phone.

“I’m clearly very excited,” said Kosloskus, who campaigned that her facilities-operations experience is an asset to the board. “It was so much work. My parents ingrained in me that if you start something, even if it gets hard, you finish it. I got into this early and didn’t know what to expect, but I gave it my very best.”

Abbott fell short of his third term and will leave the board along with Gordon Anderson and Amy Wolfe, both of whom did not run for reelection, leaving no multi-term representation on the Park Board.

Abbott said he ran among an impressive field of candidates and “the town’s in good hands.”

Incumbents Schneider-Fabes, Cesaretti reelected to D39 School Board; Hart and Kim to join

Voters have elected new members to the Wilmette School District 39 Board of Education.

The votes includes early voting and mail-in ballots that have been received and processed before election day. All other mail-in ballots must be postmarked by April 6 in order to be counted post-election.

Schneider-Fabes, the current board president, is ready to continue to lead the district out of the pandemic.

“We prioritize safety and maximizing in-person instruction,” she said. “We have a committee that helps advise the district and we will stay the course because we have been successful to date.”

Schneider-Fabes is also looking forward to coordinating with newcomers Hart and Kim during the new term.

“Bonnie and Anne ran a great race and I really enjoyed getting to know them,” she said. “I feel really great about everybody that’s going to be on the school board for the next term.”

Hart is equally excited and ready to serve her community.

“I’m thrilled to have the opportunity to serve the community,” she said.

Hart added that she is ready to listen to the community and meet their needs to help the district recover from COVID-19.

“I’m excited to have the campaign behind me and start working,” Hart said.

Reporting by Rachel Huser and Azhley Rodriguez, of Dominican University, for The Record North Shore

Wilmette Library Board gets a new look

With six candidates running for three open seats, the contested Wilmette Library Board race was one for the books on Election Day.

Library Board candidate Julie Cho came in slightly behind Nealon with 16 percent of the vote, but not enough to pass her to make the board.

Voters did not reelect longtime incumbent Ron Rodgers, who has been a library trustee for nearly 40 years. Incumbent Stuart Wolf will also not be returning to the board after he landed in fifth place on Election Day.

Sommer told The Record in a statement she was grateful for all the support she received.

“The Wilmette Library is a jewel of our community, and I’m looking forward to serving as a trustee of the library,” Sommer added. “I’m particularly excited to be working with the other new members of the board, MaryAnne O’Keefe and Trish Nealon, the current trustees and the library’s outstanding staff to make the library an even greater asset for Wilmette.”

“I am very excited for the next four years as library trustee. I thank Wilmette residents for their votes and look forward to working with the other trustees,” O’Keefe said.

Nealon, also elated to begin her position, said she “can’t wait to dig in.”

“The Wilmette Library is an unparalleled community resource and I am dedicated to keeping it that way,” Nealon added.

The race for four open Avoca District 37 Board of Education seats relies upon the results of write-in voting, which was not available from the Cook County Clerk’s Office by press time.

Seals and Balassa joined Das and Gibori on a slate called the Avoca Coalition. Dunn was removed from the ballot on sustained objections from Gibori, but ran an independent campaign, as did Rohner.

Check back with The Record for updates to this developing race