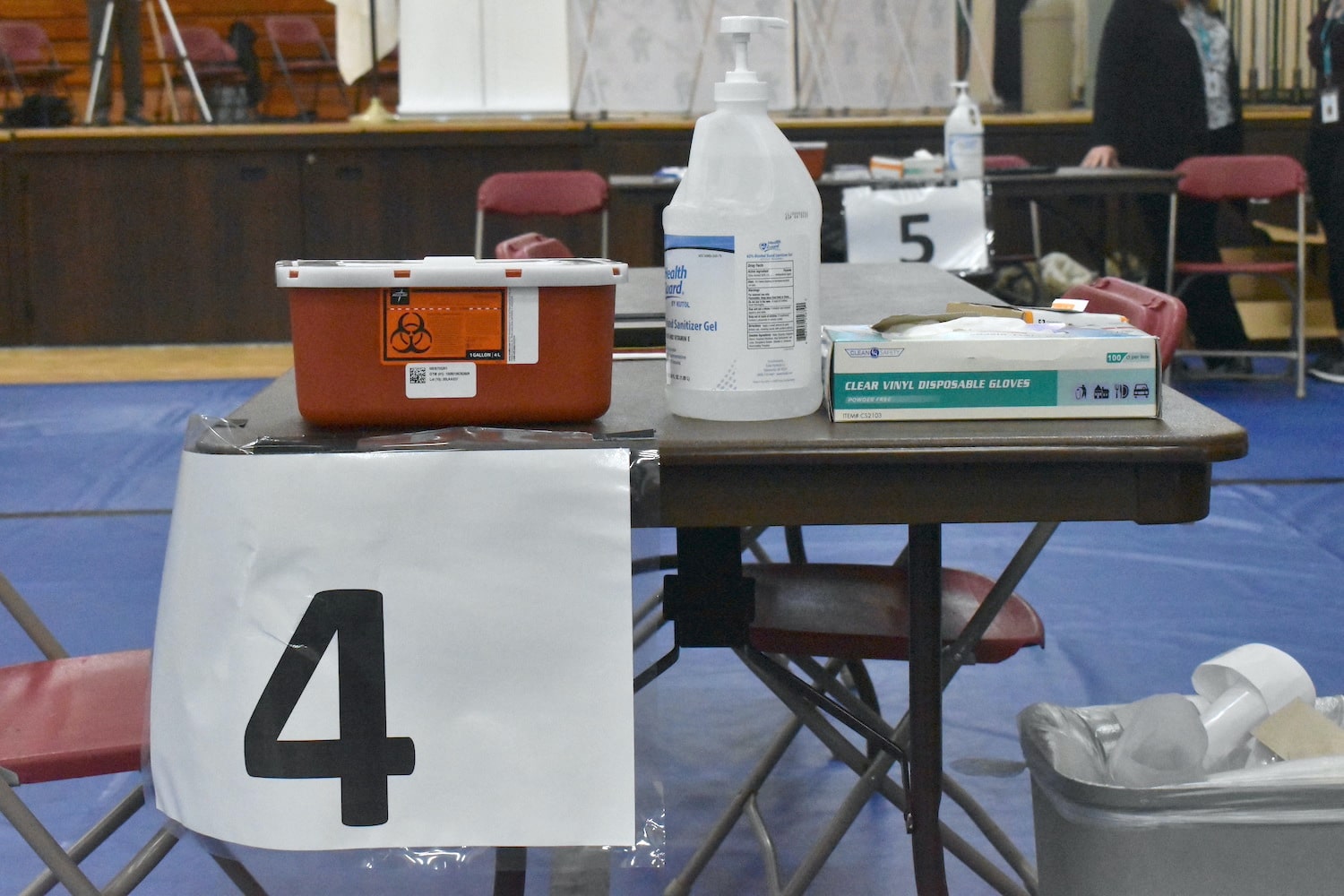 A vaccination station at the New Trier High School vaccination clinic that has administered doses to both local public employees and eligible residents. | The Record File Photo

Illinois officials announced earlier this week that progressions in the state’s reopening plan are being paused as COVID-19 cases and hospitalizations in multiple regions are again increasing.

Cook County followed suit, announcing a press conference for noon Saturday, April 3, to discuss what it called an “alarming rise in COVID cases.”

Cook County Department of Public Health (CCDPH) Senior Medical Officer and Co-Lead Dr. Rachel Rubin will discuss the concerning rise in positive COVID cases at a time when over 82 percent of the age 65 and over population and a quarter of the county overall has received at least one dose of vaccine.

That increases include New Trier Township, where two key metrics that monitor the virus’ spread — new cases per 100,000 residents and positivity rate — have steadily increased over the past 10 days.

The Township’s positivity rate (measured on a seven-day rolling average) peaked at 4.5 percent on Tuesday, March 30, a sharp increase from the 2.9 percent recorded seven days earlier on March 23, according to local data published by New Trier High School. That number dropped to 4.1 percent positivity rate on Thursday, April 1.

The high school is currently on spring break, and school officials did not respond to requests for comment.

New cases also peaked at 190.3 on March 30, a total that is more than double the number recorded on March 23.

New Trier’s Reopening Advisory Board, a committee formed to monitor local and state COVID-19 data and utilize it as guidance for making operational decisions, lists 100 new cases per week per 100,000 residents as “the threshold for significant concern in Township zip codes.”

That threshold, however, was developed prior to the district’s COVID-19 screening program.

Region 10 positivity reached a peak of 6.7 on March 23 and the last recorded number on Monday, March 29, was 6.1 percent. As of March 29, the seven-day rolling average of 5 percent is the highest number recorded since Feb. 3.

On March 11, the positivity rate was at its lowest point, 3.2 percent, since at least June 11, when the state began tracking the numbers by region. Region 10 marked its highest positivity rate, 16 percent, in mid-November. At the time, the township’s mark was above 12 percent.

New Trier Township’s region is dangerously close to falling below the state’s 20 percent Phase 4 threshold of ICU-bed availability. As of March 31, the region has 21 percent hospital bed availability, down from 27 percent at the beginning of the month. The region has marked 90 straight days, since early January, at or above 20 percent in the category.

The state’s criteria for going backward in its reopening plan and implementing stricter mitigations measures is a test positivity rate of greater than or equal to 8 percent for three consecutive days (7-day average) or a sustained increase in test positivity rate (a seven-day average for 7 of 10 days), and either a sustained increase in COVID patients in local hospitals or staffed ICU bed availability of less than 20 percent for three consecutive days.

Region 10 has experienced 20 consecutive days of increased hospitalizations due to COVID-19, going from 320 COVID patients to 433.

While many metrics are rising, vaccinations throughout the state are increasing.

More than 17 percent of Illinois residents, which equals more than 2.2 million people, are fully vaccinated as of publication time, according to the state, and more than 5.9 million vaccine doses have been administered in Illinois.

The state is averaging a seven-day rolling vaccine administration average of 109,073, up from 80,213 on March 1, data shows.

Officials announced March 31 that individuals who qualify in Phase 1C of the state’s vaccination plan are now eligible to receive the vaccine in suburban Cook County.

“We are making great progress in our vaccinations: over 25 percent of all residents in suburban Cook County and more than 80 percent of those age 65 and older have received at least one dose,” said Dr. Rachel Rubin, Senior Medical Officer and Co-Lead of CCDPH. “We are building an impressive county-wide system to administer vaccines to as many of our 2.5 million residents who want one and will be able to equitably and efficiently administer them if the vaccine supply can match the demand.”

This phase includes the last grouping of essential workers eligible before all adults age 16 and older become eligible to receive the vaccine. This group of essential workers includes transportation and logistics, utilities, manufacturing, construction and trade workers, residential and shelter facilities, financial services and defense-related activities.

A complete list of eligible essential workers can be found on the Cook County Department of Public Health website.

County officials announced April 1 that approximately 22,000 first-dose vaccinations slots would be released across four suburban sites, including the Des Plaines vaccination site, which is the closest to New Trier Township.

A press release from the county says the appointments cover Friday, Saturday and Monday.

In mid-March, Gov. JB Pritzker introduced what he is describing as a “bridge plan” to Phase 5 of the state’s reopening ladder. That phase is the time in which officials hope to lift the overwhelming majority of mitigation measures throughout the state.

The plan says that once 70 percent of Illinois residents 65 and older have been vaccinated, the bridge to the Phase 5 step will begin, meaning increased capacity limits in both indoor and outdoor settings. A 28-day monitoring period in which state health officials will review COVID-19 hospitalizations and deaths will also take place prior to the bridge phase’s start.

Earlier this week, Illinois officials said they are pausing the shift to the bridge phase.