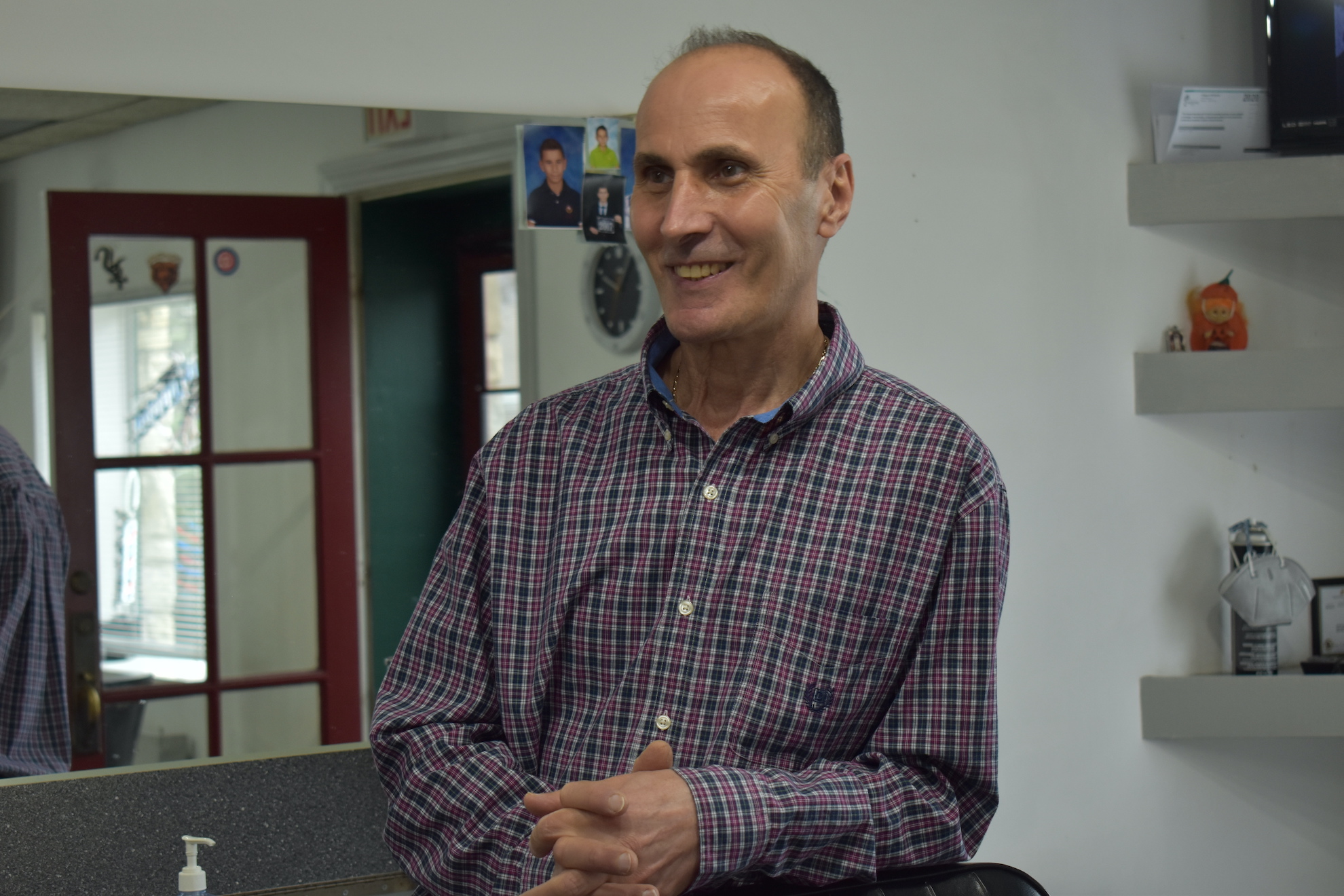 Sonny Skaria in his barbershop on Lake Avenue in Wilmette. | Joe Coughlin/The Record

“Sonny” the barber, a beloved personality in Wilmette for the past 38 years, is packing up the tools of his trade and leaving town on May 1.

“The North Shore is full of so many nice people, and there are so many memories. We’re like a family and I’m going to miss my customers, but it’s time to move on,” said Sonny Skaria, who has held court at Sonny’s Barber Shop on Lake Avenue for 28 years, and at Jerry’s Barber Shop on Green Bay for 10 years before that.

Though he’ll be slowing down, the 60-year-old with the gift of rapid-fire gab won’t be bowing out.

Some would be inclined to call Sonny a local “institution,” but he declines the honor.

He certainly has been that, working nonstop on his feet eight to 10 hours a day, 50 weeks a year, and building up and maintaining a fiercely loyal clientele.

In fact, to hear this story, one could say he has lived the quintessential American Dream.

Sonny was born in Iraq in 1960, saw that opportunities to prosper were lacking, and came here on a visa with a family member in 1977.  He was attending Senn High School in Chicago and working at a grocery store when a friend went to barber school and suggested he might want to try it out.

“I liked it and decided to make it a career,” he said, and he was soon working at Jerry’s for 65 percent of his take.

The key to building up a clientele, he was told, was not just to be a good barber but to “be patient.” Within three years, he had a solid base.

In 1993, he decided to take the plunge and opened Sonny’s Barber Shop around the corner at 1411 Lake.

He hasn’t regretted it for a moment, and neither have his customers, who have ranged in age from 4 months to 100 years.

“A lot of them have been coming here 10, 20, 30 years. Many came as kids, and now they’re bringing in their own kids. I’ve even got some that are third generation,” Sonny said. “I make it fun, like a family thing. It’s not just ‘cut hair and get out of here.’ You get to know the families and the kids and the history of the people.”

Said one: “Growing up I would only get my hair cut by Sonny, and for good reason. Sonny is the man…He is friendly, great with kids, very smart, his accent is sometimes hard to understand, but once he cuts your hair he will remember you forever. He is a real people person.”

Said another: “Sonny is the gold standard for barbers in the area, and I have been a customer for 10 years. His hallmarks are the following: speed, fair price, precision, and unabashed political commentary. He’s a good, hardworking dude who values his customers.”

And third: “Old school, one-man shop. Great consistent cut. You don’t find that many barbers who have the skills like Sonny these days.”

The cliche is that a barbershop is a safe, nonjudgmental space for men to talk about everything and anything and do so knowing that whatever is said in the chair will stay in the chair, and it’s a cliche for a reason.

That’s certainly been the case at Sonny’s, where it’s him, the customer and most likely the muffled sound of a vintage movie on the TV in the corner of the sparsely appointed shop.

Sonny’s both a talker and a listener, and when he’s cutting your hair, there is very little quiet time, unless you want it.

“People feel like they can talk to me about anything they want,” he said. “They’ve got problems with the marriage, problems with kids, everything, they want to talk about it. I’m like a psychiatrist. It’s all private. I don’t tell anybody anything. I give advice to a lot of people, too, and sometimes I give therapy. They’ve got a back problem; I can fix that sometimes.”

Sports, of course, are another common topic of conversation, all the way from Wilmette Little League to the pros: “A lot of people, they want to talk about how bad the Bears and their owners are.”

Politics are a little bit trickier, depending on who is sitting in the chair.

“People can get a little crazy sometimes,” he said. “They get offended and too serious and some people don’t come back. I don’t talk about politics too much anymore.”

Some customers enjoy telling stories about their military careers.

“They want to talk about World War II, or the Vietnam war; these people are my heroes. They went through a lot of stuff and it’s interesting.”

One client, for example, was a machine gunner in a WWII bomber, and told how he miraculously survived being shot down over Germany, sustaining only a broken leg.

A reflection of Sonny’s love for his customers is taped in the form of three small photos on the mirror behind his chair.

One photo is of a customer who died of leukemia at age 22: “He was the nicest kid I ever met”; A second is of James Justin White Sr, who died in 2020: “He was a good man, he was old-school, he was just fun”; and a third photo is of Robert Kenyon, who died in 2018: “He is one of the nicest persons I’ve known in my life.”

“They are there because of the memories,” Sonny said. “They are good people. You cannot forget good people. They are like a family, you can’t forget them.”

Sonny credits his popularity with customers and his longevity in the business to power over mind and body.

“I come to work and I’m happy,” he explains. “You’ve got to be happy doing this kind of job. If you don’t make it happy it ain’t gonna work. If you’re not happy you shouldn’t be doing it.”

Then the body, which in his case, is leaner than many men 10 years his junior.

“I’ve never been sick. You work hard, take care of yourself, eat healthy food, don’t eat junk food, don’t eat fried food, you’re fine. I eat fruits, vegetables, no desserts, no dark meat. And you gotta work out, you gotta stay in shape for this job. It’s a tough job, a lot of work, a lot of standing. You have to do it right. If you do it right, it works well. If you don’t, you’ll have back problems, knee problems, shoulder problems, any kind of problem. I do weights, yoga and walk.”

Moving on in May, Sonny and Fay, his wife of 21 years, plan to do some traveling.

For decades,  Sonny has been taking his annual vacation in Greece, and now he owns a house in Athens, 10 minutes from the beach.

That’s one travel destination, for sure, and maybe down the road for up to three months.

“Greece is a beautiful place, and a lot of people speak English,” he said.

Their son Christopher, 18, is planning to attend DePaul on a scholarship.

Once settled back home, he hopes some of his old customers in need of a trim will give him a call.

Either way, Sonny knows he is a man who has done his best, lived the American Dream, and left a mark.