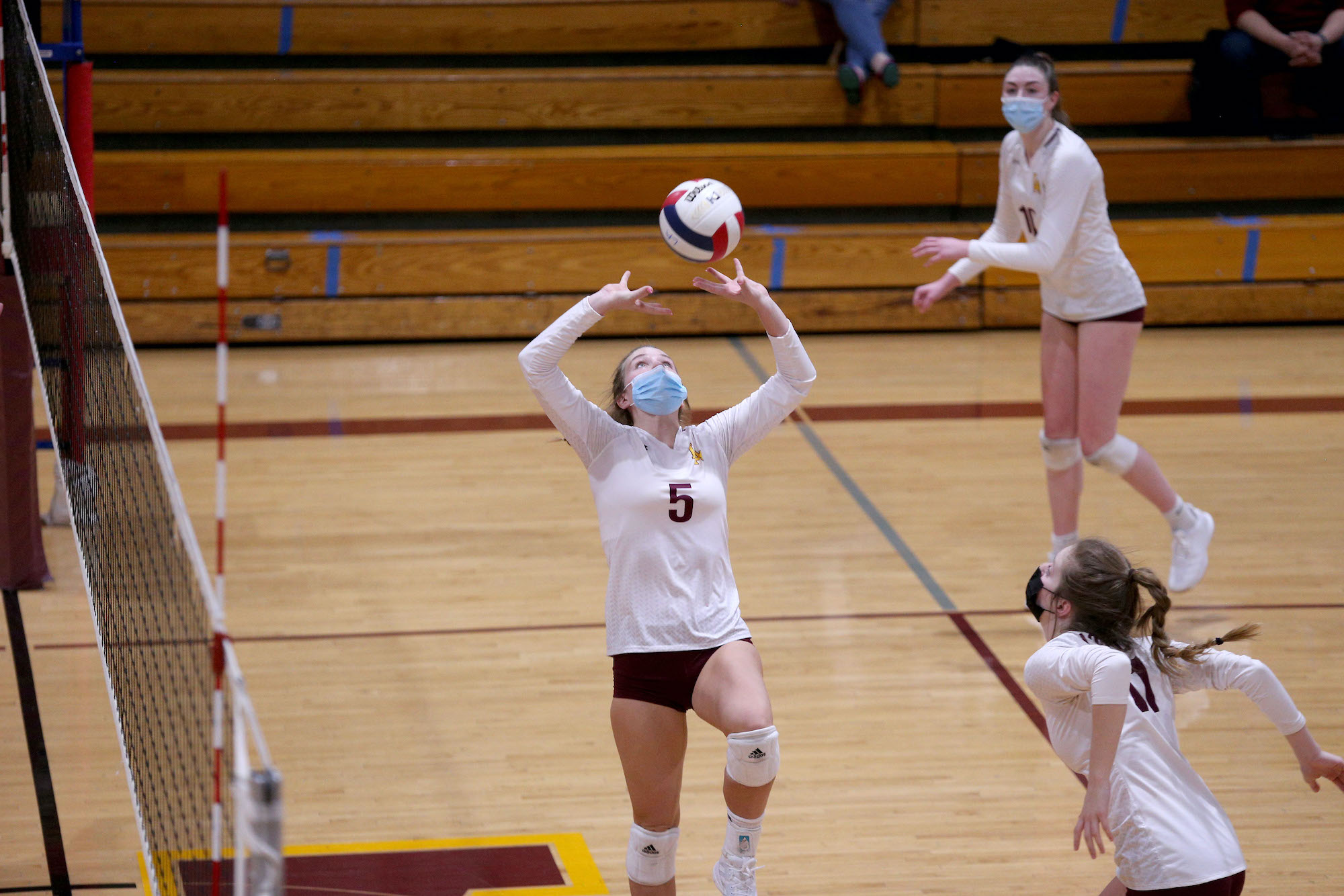 Loyola Academy doesn’t usually need more motivation when it competes against New Trier, but on Friday night, it was there.

After losing a three-set thriller to conference rival St. Ignatius the night before at home, the Ramblers wanted to defend their home court and make a statement, taking down their rival 25-16, 26-24 in the process.

“There’s just a lot of drive from the start,” Loyola senior KK Raymond said. “It makes it easier to want to pound out the first few points.”

Loyola started the match on a 10-0 run thanks to strong serving from Raymond and key kills from its attackers.

After a tough hitting night against the Wolfpack the night before, the Ramblers made use of their strong passing and blocking to open up the hitting lanes for much of the set.

The Ramblers led by as much as 17-6 before the Trevians rattled a late rally to make it a 23-16 first game, but Loyola soon finished off the win.

“The girls stepped it up completely from the beginning,” Ramblers coach Mallory Thelander said. “They were super hungry and ready to play tonight.”

Loyola started the second set with a 6-2 run before New Trier fought back to take a 7-6 lead. The two teams exchanged points for much of the half and Loyola rallied after a few key Cate Howard kills to take a 15-14 lead.

New Trier had a 23-21 lead late in the set before Loyola fought back with a few kills and Trevians errors to take the set and the match.

Trevians coach Hannah Hsieh thought her team started to serve more in sync to their gameplan in the second set, but inconsistencies cost her team toward the end.

“I was proud of our girls that we were able to get our head in the game and get a little bit of a rhythm,” Hsieh said.

Just two games into the season, Hsieh didn’t notice a particular issue to cause concern. The Trevians will need to figure things out with little practice time, just like all other teams will need in a unique spring season due to a COVID-19 delay.

There’s usually more time for teams to get in a groove. Many players come into a season after summer workouts, but with the spring start this year, players had to come from their club season, not used to playing with their high school teammates.

Players usually have a few tournaments early in the season to figure out how to play with each other, but with no tournaments allowed this year and little practice time, New Trier will need to learn on the spot during matches, something Hseih saw her team do against Loyola.

“We’re going to have to adjust during games and that’s something the girls are a little slower to do, but just today, I thought they did a nice job of adjusting a little bit,” Hseih said.

Both teams will also need to learn how to adjust to the protocols. Whether it’s wearing masks while playing or making sure to keep their distance from one another, the players and coaches have faced news challenges in each of their matches a week into the season, but they’re willing to adjust.

The Trevians are focusing on the game, which they weren’t sure they’d even get to play this season. They’ve talked about volleyball being their “happy place,” where players can sidestep the chaos off the court.

That’s how Raymond is looking at this season, too.

After losing her junior softball season last spring, she is grateful to get a chance to play volleyball with her teammates.

Thelander wants to give her seniors all the chances to have some sense of normalcy in their abnormal senior year in high school, and in a shorter volleyball season, there’s little motivation needed for nights like Friday night.

“I’m so grateful,” Raymond said, “to have this short season with them and to finish up my volleyball career.”