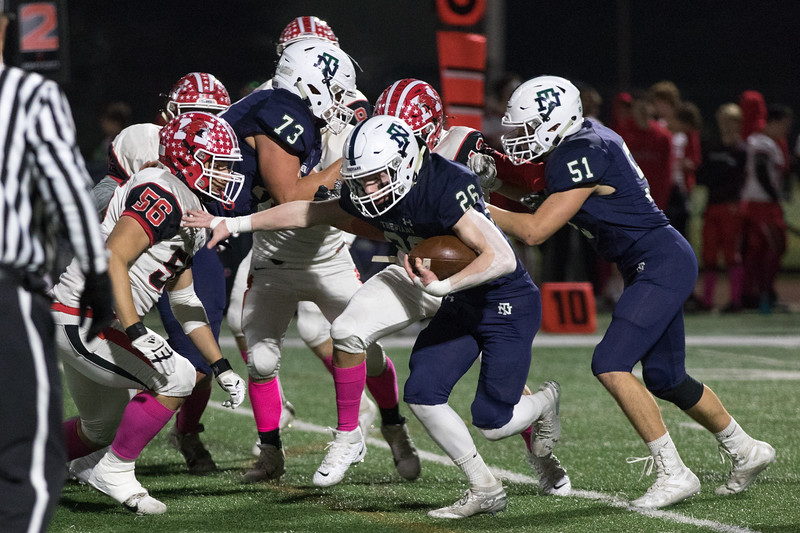 Brody Roth is a senior tailback and linebacker for the Trevians. Last season, Roth was an All-Conference and All-Area selection.

I think last year, yes. Before every game I said a little prayer in my head and put my hands up to the sky. But we’ll see, new year, new way of doing things.

Recruiting season has been kind of weird for me. There are two options for me: pursuing engineering at Case Western (University) with football as well and maybe business school at Indiana (University) and continuing to play rugby.

3. When will you make that decision?

Probably in the next few weeks here. That’s been on my mind for a while.

4. Who is the funniest guy on the team?

I would have said David Davidkov. He’s always gonna be a Trev, but he’s over there at (University of) Iowa now. He’s one of the goofiest, light-hearted guys I know. He’s also the toughest and hardest-working guy I know.

5. If you could play another sport at New Trier, what would it be?

We’ll say golf. I’m not very good at golf and I think that would get my golf game a little bit better.

6. If you are in Walgreens, with a couple dollars, what are you buying?

Some ranch sunflower seeds and an Arizona iced tea.

7. What is something no one knows about you?

One thing I learned about myself this year is that I am very into philosophy. I have this English class that’s based in philosophy, and I find myself very interested in that.

8. What is your favorite thing to do off the field?

Off the field? Just being around the guys. We’re really a family. If not together on the field, we’re usually together off of it as well. And the girlfriend takes up a lot of time as well.

I don’t know. Something where I wake up in the morning hopefully not too early and go to work with a smile on my face.

10. What does this team want to accomplish this year?

I think the funny thing there’s an opportunity to win “two conferences” here. And that’s a once-in-a-lifetime thing. I don’t think it’ll happen again. By winning our side of the conference and getting that “bowl game” and playing the other conference winner, we’d be double conference champions.