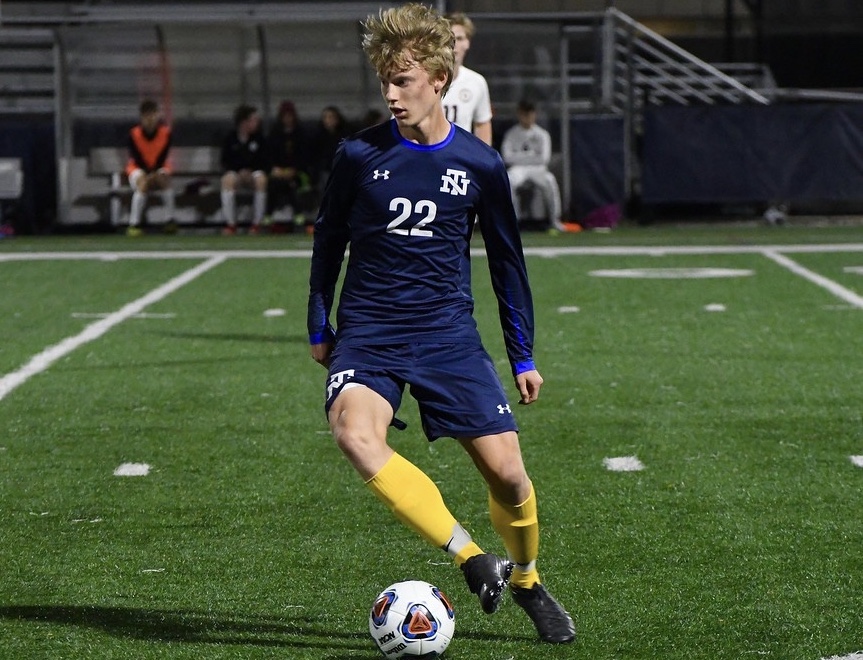 Will Franzen plays the ball for the Trevians during his junior season. | Photo Submitted

Will Franzen is a senior midfielder for the Trevians who tallied 7 goals and 12 assists last season. He scored twice and assisted on two goals in the Trevs 6-2 season-opening win Tuesday, March 9.

I always put my right sock on before left. I also take a minute before the game, close my eyes, and reflect on and visualize how I’m going to play in the game.

2. What is your favorite thing to do off the field?

I really like socializing with friends and being with my siblings (younger brother and sister). I like watching soccer on TV, too.

Chelsea (F.C. of the Premier League). I’ve liked them since I was 9 years old because an older friend of mine liked them. I idolized (Didier) Drogba and (Eden) Hazard. Anyone who knows me knows I am a huge Chelsea fan.

Definitely basketball. I play Night League at New Trier, and our team got to championship last year. I play basketball a lot with my brother and I really like watching the NBA too.

5. What is your favorite NBA player?

Probably Giannis (Antetokounmpo; Milwaukee Bucks). My dad is from Milwaukee so I really like the Bucks. He is a great guy and good role model.

6. If you won the lottery, what would be your first purchase?

I’d probably buy a boat — a huge yacht. I really like traveling. I would probably just cruise around everywhere on a boat, meet new people and experience new things.

8. What is the funniest guy on the team?

Jake Krueger, 100 percent. He’s so good at bringing a team together through his comedy. He’s very open and accepting and knows when to make a joke and when to be serious. He’s pretty crazy, which makes him funny. And he’s a beast at soccer.

9. What is something no one knows about you?

I really like doing puzzles. I do them on my own, like mind puzzles: crossword and riddle-type games, Sudoku.

There is no state tournament. We’re pretty bummed about that, but we’re looking to win conference again, looking to pretty much win out the games that we do have, which I think is 15 as of right now. We usually have a record pretty close to undefeated but because of the shortened season, I feel like (being undefeated) is a realistic possibility. We just want to have fun as well, just make a bunch of memories we deserve to make after a long offseason.