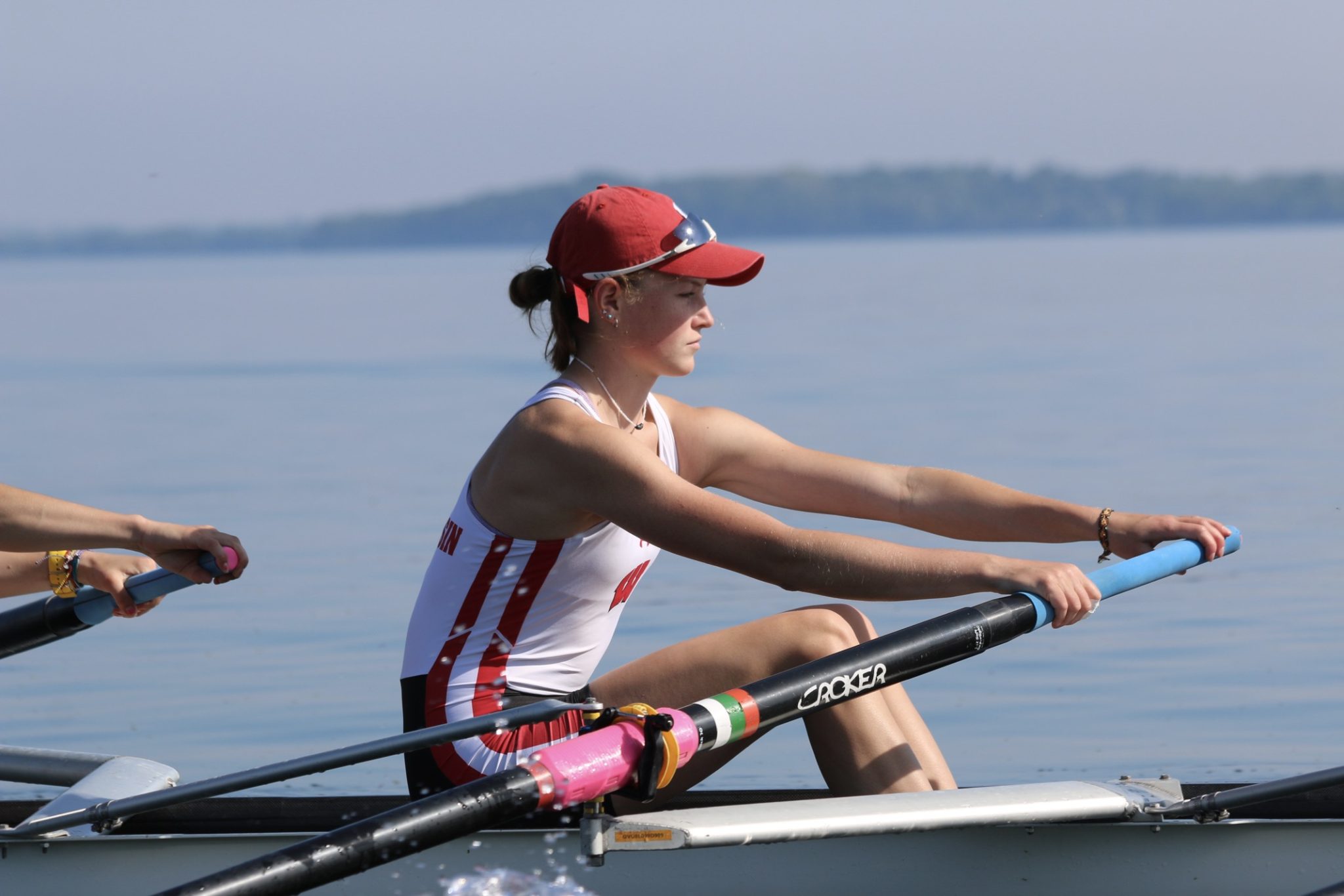 Northfield native Grace Joyce has one more chance at the 2021 Summer Olympics during a qualifying event in April. But regardless of the outcome, the New Trier High School alumna has her eyes set on 2024. | Photo courtesy of University of Wisconsin

Immediately after a week of fierce competition at the Team USA Olympic rowing trials in Florida, Grace Joyce packed up her boats, jumped in the car and drove 10 hours to North Carolina.

She went back to work.

The 22-year-old had just gone toe-to-toe with the top rowers in the country with some of the highest-possible stakes on the line: a chance at the 2021 Summer Olympic Games.

Joyce and her partner Christine Cavallo, a pair of relative newcomers on the Olympic-hopeful stage, finished second in the women’s lightweight doubles sculls division, just eight seconds behind Molly Reckford and Michelle Sechser.

The runnerup finish was not enough for Joyce and Cavallo to advance to the international stage.

Now training in the Tar Heel state, the New Trier alumna still holds a glimmer of hope for a trip to Tokyo, but she will have to qualify in the openweight doubles trials at the end of April.

RELATED: The trials came earlier than expected but at 22, local rower Grace Joyce is ready for her Olympic shot

Although Joyce called her chances a longshot, she plans on making the most of the opportunity, gaining experience and further progressing as one of the country’s elite young talents.

“How I’m thinking about this opportunity is that now I have basically a few years to gain speed and learn as much as possible and master the sport as much as I can as an openweight and then figure stuff out my plans down the line,” Joyce said.

Despite the outcome of the February trials, Joyce believes the experience of competing was “extremely valuable.”

“What I think is really the takeaway is that we did not lose this past week but that we were beaten,” Joyce said. “The only words to describe the feeling of being beaten by a crew like that is surreal and epic, honestly.”

Results for the trials are also determined with a measured percent off of the world’s best time. Joyce and Cavallo finished with 95 percent, only one percent behind’s Reckford and Sechser’s 96 percent.

“For Christine and I, having rowed together for only about 3 to 4 months, going up against women in their late 30s that have been training for this Olympic cycle, those four years, and four years before that as well,” Joyce said, “to be able to show up to the line and show we have the speed physically and mentally, and we’re able to put together a race plan that puts us 1 percent off of the top rowing crew is insane.”

“So personally, I was ecstatic with our performance and Christine was pretty stoked as well. Because if this is the foundation we’re laying down, it’s kind of more that we’re looking forward to (what’s ahead). I personally left everything out there and that was the best that I could do, as kind of a kid that’s just taking her first shot at it.”

After the Olympic trials in April, Joyce will take no time off as she plans to then begin preparing for the world cups and world championships, she said.

For at least the next year, Joyce and Cavallo will go their separate ways; however, the duo is hoping to reconnect closer to 2024.

“We’re kind of going to see where the journey of the sport takes us,” Joyce said. “Three years is kind of a while.”

Joyce is targeting to train again as a lightweight double scull rower for the 2024 games.

While she’s thankful for the early shot at the Olympics this year, the Northfield native is ready to make her full-fledged push for the Paris Summer Games in 2024.

“I think the bottom line is that I’m just honored to be competing at this level and working alongside these legends of women that I have heard about all through high school and college,” Joyce said. “I’m just working to improve: as a rower, as a person, physically and mentally, and in all aspects. So I think going forward I’m just ecstatic. I’m very very happy to say the least.

“ … I know it’s harder sometimes to see the big picture looking at a four-year span. Weirdly to me, that feels so short now, I feel like I have so much to do, so much to learn because I’m still just a kid in the sport. We’re just out here working to push the envelope and shake the world of women’s lightweight rowing, which we did.”