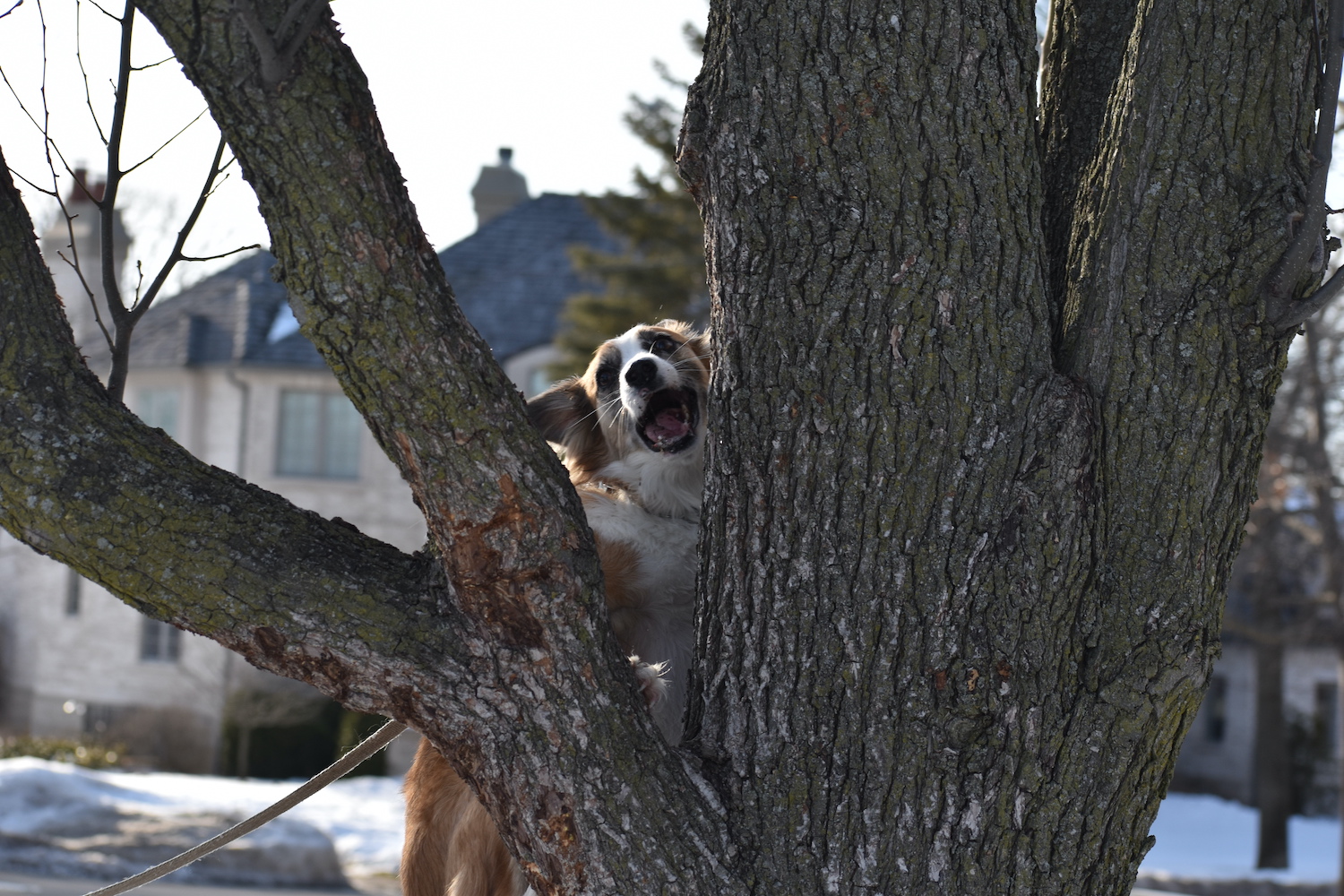 As is the case for many young pups, Moose’s nemesis was the squirrel.

But the neighborhood rivalry was one-sided, the squirrel always besting the pup with his go-to maneuver: escape by tree.

Now 3 years old, Moose doesn’t need squirrel competition anymore. He is known throughout Glencoe as the dog who climbs trees.

“When he was young, we’d go on walks and he’d watch the squirrels climb the trees,” said Sally Conley, Moose’s owner. “All of the sudden he was biting bark and trying to go get them. He would find a low branch and just hang from it (with his teeth). Now, pretty much anytime we go on a walk he climbs trees.”

Three years ago, the Conleys had two dogs: 8-year-old Mojo and 2-year-old Maisie.

Sally said they wanted companionship and entertainment for the younger Maisie, and boy did they find it.

Moose was part of a rescue litter birthed by a homeless dog that was cared for by an Evanston family.

A DNA test showed that Moose was mostly border collie; though, his mother looked “quite a bit like an Australian Shepherd,” Sally said.

Inside the house, Moose was and still is a gentle, cuddly pup, but the Conleys found out when outdoors Moose ups the entertainment value.

On walks, Moose tenses with excitement at every tree he sees. No squirrel necessary. He then looks to Sally for permission to climb — which is usually granted.

And that’s not all. Moose will hop on rock walls, benches and landscaping. He even tried snow drifts, which were hit or miss.

“His life is a parkour course,” Sally said.

Moose also loves jumping into the arms of any of the five Conley children, playing fetch and slapping the tetherball in the backyard.

He also howls along with the tornado siren on the first Tuesday of the month. It’s the only time he howls, Sally said.

But Moose’s favorite pastime is scaling trees. On dry days, he can even stabilize himself on a branch.

“I have been nervous,” Sally confessed, “like, ‘Shoot, how am I going to get him down?’ Or I’m worried he’ll hurt his paws or an ACL. But so far, so good.

“Sometimes he gets really high and grabs on to a branch with his teeth and hangs on.”

The Conleys live near a local schoolyard with plenty of trees. Moose’s favorite tree is right across the street.

Look close enough and you can trace Sally and Moose’s walking path by the teeth and claw marks on all the trees along the way.

On walks, Moose isn’t bothered by other people or other dogs and sometimes not even squirrels — if they are on the ground. Because Moose has only one thing on his mind.

“It’s just kind of evolved,” Sally said of his tree climbing. “He’s the funniest dog. He’s the sweetest dog inside, always cuddling, but outside it’s a whole new ball game.”