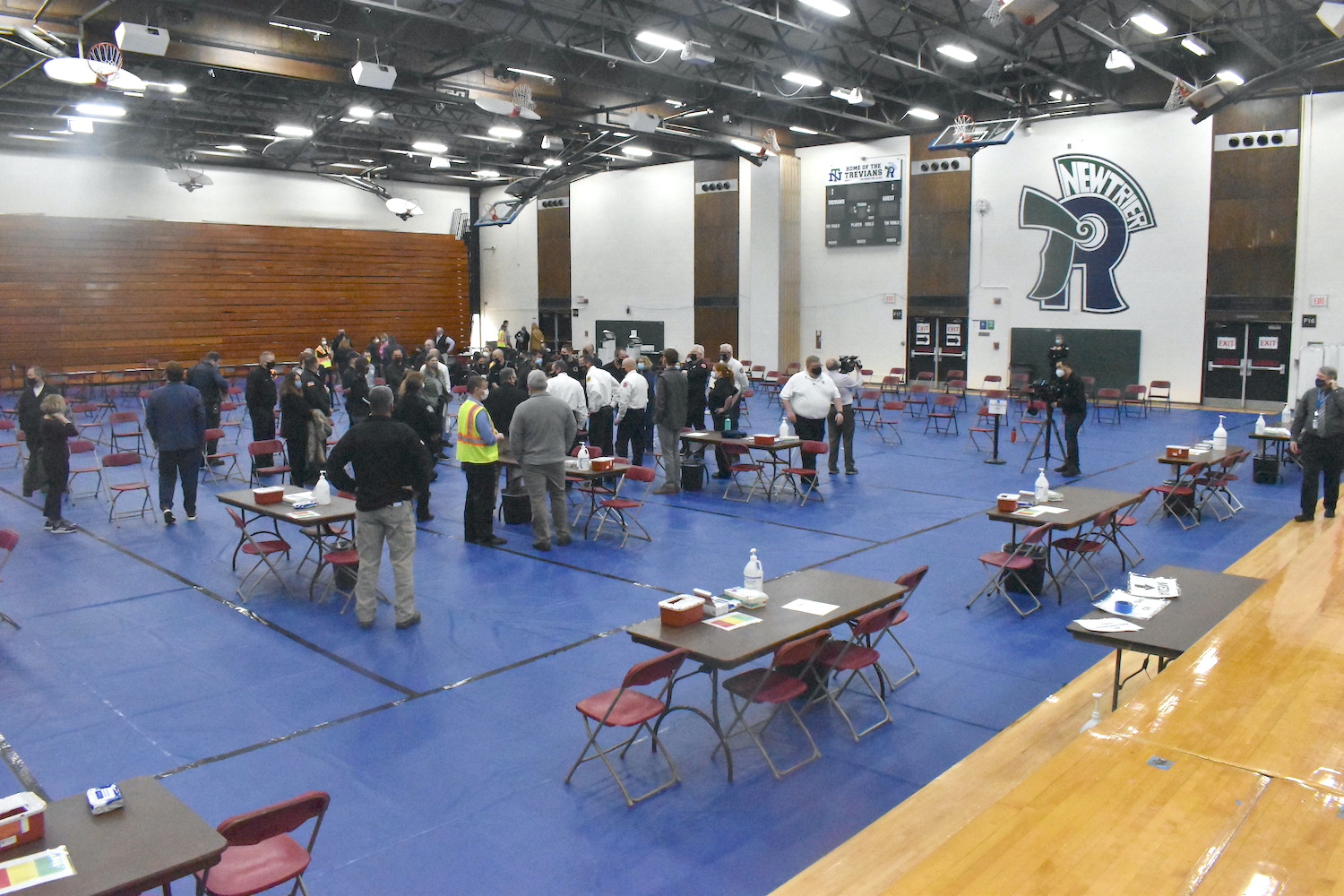 (EDITOR’S NOTE: The number of vaccines given has been updated from 480 to 571, based on an update from local officials.)

The site was given 480 vaccine vials, but nearly 100 extra doses were created from those vials, local officials reported after the event.

The location, which the Cook County Department of Public Health calls a Point of Distribution, or POD, is a collaboration between a number of suburban organizations, including the county, New Trier District 203 and a series of communities associated with an emergency-management cohort called the Mutual Aid Box Alarm System, or MABAS, Division 3.

“This would not have happened, but for the (fire and police) chiefs, village managers and everyone who got together and simply would not take no for an answer,” said Scott Britton, a Cook County commissioner, filling in for Cook County Board President Toni Preckwinkle at the opening event.

When the vaccine first became available in December, New Trier quickly offered its facilities, which have historically been used for emergency medical efforts.

Around the same time, as previously reported by The Record, MABAS 3 leaders worked in concert with local public schools to build a program that authorized local paramedics to inoculate area essential workers, such as first-responders and educators.

“This is a really great example of how units of government that may not work together normally found a way to work together,” Bahan said.

Braiman said of the 571 vaccines on Day 1 about 200 were going to area teachers — public and private. The remaining were going to a mix of police officers and public-facing village employees, such as water-meter operators and snowplow drivers.

Participating communities are all part of MABAS 3 and within Cook County. They include New Trier communities Glencoe, Winnetka, Kenilworth, Wilmette and Northfield.

At the site, trained paramedics administered the vaccine and were supported by local village staffers who volunteered for the day.

“We had more people who wanted to help than on hand today,” Braiman said. “A lot of people wanted to make a difference.”

In line to receive a vaccination was Andy Lazar, who works with the Village of Wilmette’s Water Management Department.

From trying to do so for his mother, Lazar knew it was challenging to get a vaccine appointment, so he was relieved this opportunity came about.

Lazar is one of about 5,000 individuals who qualify for the New Trier vaccination site, meaning more than 10 percent of that number received the first dose on Wednesday, Feb. 24, and will be scheduled for the second shot on March 17, officials said.

Officials hope the site can eventually open as a public vaccination site, but offered no timeline for when that may happen. Furthermore, it is unclear when the site will receive more vaccine doses for essential workers; though, officials hope it happens in about two weeks.

Israel Rocha Jr., the county health department CEO, said that the county is making progress to increase its vaccination supply, but did not have details on when or how much that would be.

“We get our allocation based on the CDC to the state and down to our local jurisdiction,” he said. “The progress we’ve been seeing is that FEMA and the CDC are going to increase the amount available over the next two weeks. So we’re hoping we will see that. Every week we get a little bit more and a little bit more.”

To Rocha’s point, Illinois Gov. JB Pritzker announced Wednesday that the state expects to receive 100,000 vaccine doses per day by mid-March, an increase of 67 percent from the current distribution (40,000).

As of Feb. 24, the county had administered 272,201 doses of the vaccine with nearly 4 percent of the county’s suburban population completing the vaccination series.

Additionally, the emergence of the Johnson and Johnson vaccine — which the FDA determined is “safe and effective”; though, less effective in trials than the Moderna and Pfizer versions — could significantly impact vaccination efforts across the country.

Another boon to the vaccination rollout could be the success of the New Trier site, which is the first in the state that utilizes paramedics to administer the vaccine.

When MABAS 3 leaders developed a plan for the location, it was their intention for the strategy to help communities far and wide.

County officials believe it has the power to do so, calling it a pilot program.

The model can also evolve, as its architects — such as Braiman and Bahan — intended for trained paramedics to also do home visits to administer the vaccines.

At-home vaccinations would specifically benefit certain at-risk groups, like senior citizens and those with disabilities.

“We need to have a mechanism that we don’t have now to go to people’s homes,” Britton said. “I think (the New Trier site) is the first stage of getting that lined up so the paramedics go and give them a vaccine.

“I think they are going to be more comfortable with a firefighter or paramedic from their local community.”

Britton also said he’s pushing for a mass vaccination site in the northern suburbs, and one is close to fruition in Hoffman Estates.