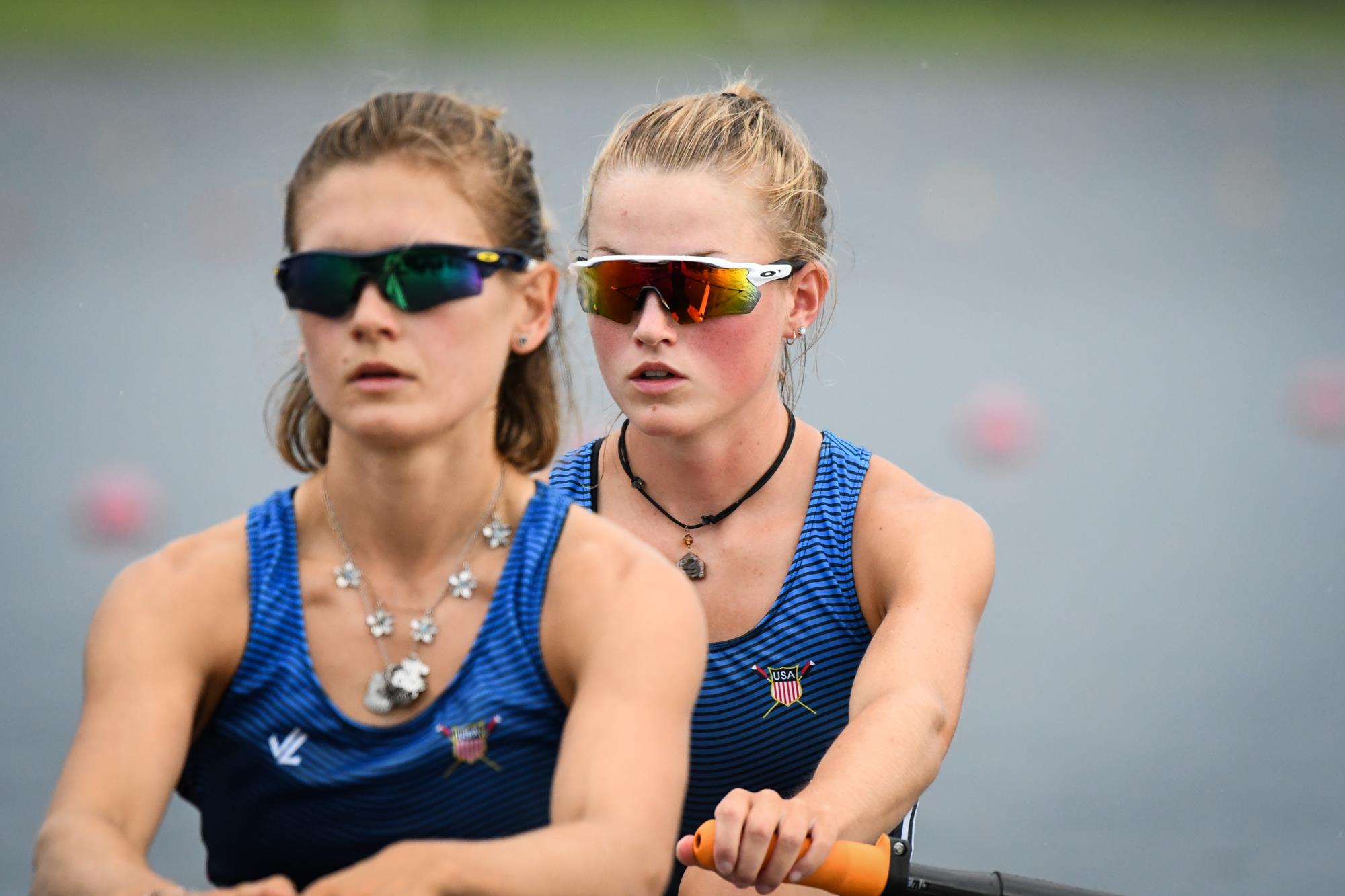 New Trier alumna Grace Joyce is one of the country's top rowers, and the Northfield native will compete in the 2021 Olympic trials Feb. 22-26. | Photo courtesy of United States Rowing.

The toughest stretch of athletic training Grace Joyce has ever endured is concluding, and she is thankful for every second of it.

The grueling year was filled with preparation, countless sacrifices, and months of physical and mental challenges. And the daily, hours-long practices, weight training and video-studying sessions have led to this.

Joyce, a New Trier High School alumna, is putting all the work to the test this week as she competes in the Team USA Olympic rowing trials with the hope of earning a chance to participate in the 2021 Summer Games in Tokyo.

While the journey to become an Olympic-level competitor is unrelenting, Joyce considers herself lucky. Her dreams of competing at the world’s highest level are within reach — and sooner than she ever imagined.

Vying for a spot in the Tokyo games was not on Joyce’s radar until recently. A 2020 graduate of the University of Wisconsin-Madison, she had her sights on the 2024 Olympics.

But in mid-March, the International Olympic Committee announced the postponement of the 2020 games due to the COVID-19 pandemic — and Joyce’s prospects for the worldwide competition suddenly changed.

“For me, being so young and having an opportunity like this to actually have a high chance of making it to 2021, I consider myself very lucky to have this chance right now, right out of college, and to get the experience of Olympic-trial racing and actually have the chance to go,” Joyce said.

In Craftsbury, Vermont, an unlikely partnership forms — and the road to Tokyo begins

Grace Joyce arrived at one of the United States’ elite training centers in the summer of 2020 with a plan: prepare for a chance at the Olympics games four years later in Paris.

The outlook of her summer at the Craftsbury Outdoor Center in Vermont quickly changed when Joyce’s rowing prowess caught the eye of Christine Cavallo, one of the sport’s top talents.

Cavallo, a world-recorder holder who has posted elite racing times over the past several years, noticed Joyce’s speed and asked to row with her.

Something special was in the works.

“We tried it out and we had Olympic-level speed from the beginning,” Joyce said.

The pair immediately began training and continued with preparations to compete in the sport’s lightweight women’s double sculls category, which involves two rowers in a sculling boat with two oars. A different form of rowing is traditionally practiced at New Trier, which competes in sweep, single-oar rowing.

Joyce and Cavallo’s participation in the lightweight double category requires them to maintain a boat-average weight of 125.6 pounds, an added difficulty in training.

“We’re training three times a day but we also have to take it one step further with dieting and cutting weight,” Joyce said. “That is pretty intense. We’re just fine tuning things.”

From Feb. 22-26, the duo will be one of 10 boats vying for the chance to move forward in the Olympic-qualifying process. They will be competing against women from different training clubs across the country.

Olympics trials are a regatta-style format with time-based trials first, followed by heats, semifinals and finals.

If Joyce, 22, and Cavallo, 25, win, they will be the United States representative and subsequently advance to the final Olympic qualification regatta in May in Lucerne, Switzerland.

Joyce is confident in the partnership’s chances of winning the trials but knows the duo will need to be at the top of their game.

The pair’s biggest challenge will likely come from Mary Jones and Emily Schmieg, a team with more than a decade of individual professional rowing experience. Jones and Schmieg have rowed together for six years.

“We are very comparable, if not faster, than this top boat right now,” Joyce said. “It’s just more if they will be able to out-technique us with their experience with their years. They have 10 more years than me in the sport.

“Hopefully we can keep it together. It’s pretty exciting honestly.”

Joyce and Cavallo officially committed to training together in the early fall of 2020. What followed that decision was the most challenging, six-month period Joyce has experienced in the sport.

Six days a week, the Northfield native was greeted with a wake-up call at 5:45 a.m. Joyce then practiced for two or three hours in the morning, lifted for another hour in the early afternoon, and then reviewed practice film with her coaches.

Her afternoon schedule saw few breaks. She either did a two-hour cross-training session or a two-hour row.

One day of the week was devoted to rest, while the other six were near-nonstop preparation.

The schedule may be tireless, but it’s the price Joyce and Cavallo must endure to make up for lost time.

“This is definitely the hardest thing that I’ve done to date, training with Christine, trying to make up for the experience time that we haven’t had together that the other competitors have,” Joyce said.

Aside from the constant physical challenges, there’s the stresses of training for the biggest moment of your life amid a global pandemic.

Joyce is one of approximately 50 Olympic-hopeful athletes that lived inside a communal bubble at the Craftsbury Center.

To gain entry into the bubble in June of 2020, Joyce needed to obtain a negative COVID-19 test, then quarantine for two weeks, then receive a negative test again.

Once she was accepted in the training bubble, she followed a strict set of pandemic-related guidelines.

She could not come back home to Northfield for Thanksgiving or Christmas, interact with anyone outside of the bubble, or even go for groceries.

“I haven’t been in a building that is not one of our communal houses since June, which is kind of crazy and insane,” Joyce said. “But you make it work.”

The experience is trying but it’s provided several key takeaways.

“It’s been super tough, but it’s been amazing because I am learning more than I have ever learned,” Joyce said. “Learning from Christine, who has already had three years out-of-college experience with the Olympic scene, and being alongside elite, Olympic-level athletes. It’s pretty wild to see how they conduct themselves. And mentally, how I have shifted, with pressures and stress.”

For the Joyces, rowing is all in the family — and it started at New Trier

She played soccer during her early athletic endeavors but gained interest in rowing after her older sister, Abby, started learning the sport.

After her years at New Trier, Grace continued rowing at the University of Wisconsin, where she competed in the lightweight class, a division in which rowers must weigh less than 130 pounds.

Halfway through college, she briefly switched to the openweight class of rowing but soon returned to competing as a lightweight when she earned a spot on the United States Under 23 team.

At that point, she was rowing with the best America had to offer, something she never imagined while at New Trier.

“I was slow; I was so bad at it my first year rowing. I literally did not apply myself and I thought I was horrible,” she said. “I never thought that I would learn to appreciate something as much as I appreciate rowing now and the opportunities that it’s given me. I’m very lucky.”

Grace credited New Trier coaches Rose Marchuk and Sandra Culver for helping her improve and stick with the sport.

The Joyce family’s rowing legacy at the high school still continues as Grace’s younger sister is a member of the rowing. Her brother, a sophomore at Indiana University, also rowed at New Trier.

‘My goal is to be the best in the United States’

The 2021 summer Olympics have Joyce’s complete and full attention. But a date in Paris three years down the road is also on her radar.

Joyce’s plan for the 2024 Olympics is to compete as an openweight, she said, adding she’s encouraged to see how far she can go with no weight restrictions, opening up all training methods and diets.

“My goal is to be the best in the United States,” Joyce said. “ … I don’t know yet if I would want to be in a boat alone but my goal is to become as skilled as I can in the single.”

Joyce will have two shots at the 2021 Summer Games. If she does not make it via the trials this week, she has a second opportunity in a different boat class, the openweight double; though, her chances of winning that event are less likely, she said.

All of the effort is feeding her aspirations for 2024, and depending on the outcome of the trials, she could begin training for the Paris games as soon as March.

But Joyce has every intention of making the most of the opportunity in front of her. She didn’t endure the toughest stretch of her career for anything less.

“Having a chance to compete at the Olympics would just be insane,” Joyce said. “… For so long, (rowing) was just something that I was doing through high school and college. But then making the shift two-three years ago that I’m going to master this craft, that I’m going to be the top of the top — not only in the United States, but in the world — and be able to hit this goal four years early, as a 22-year-old right out of college, that would be insanity.”