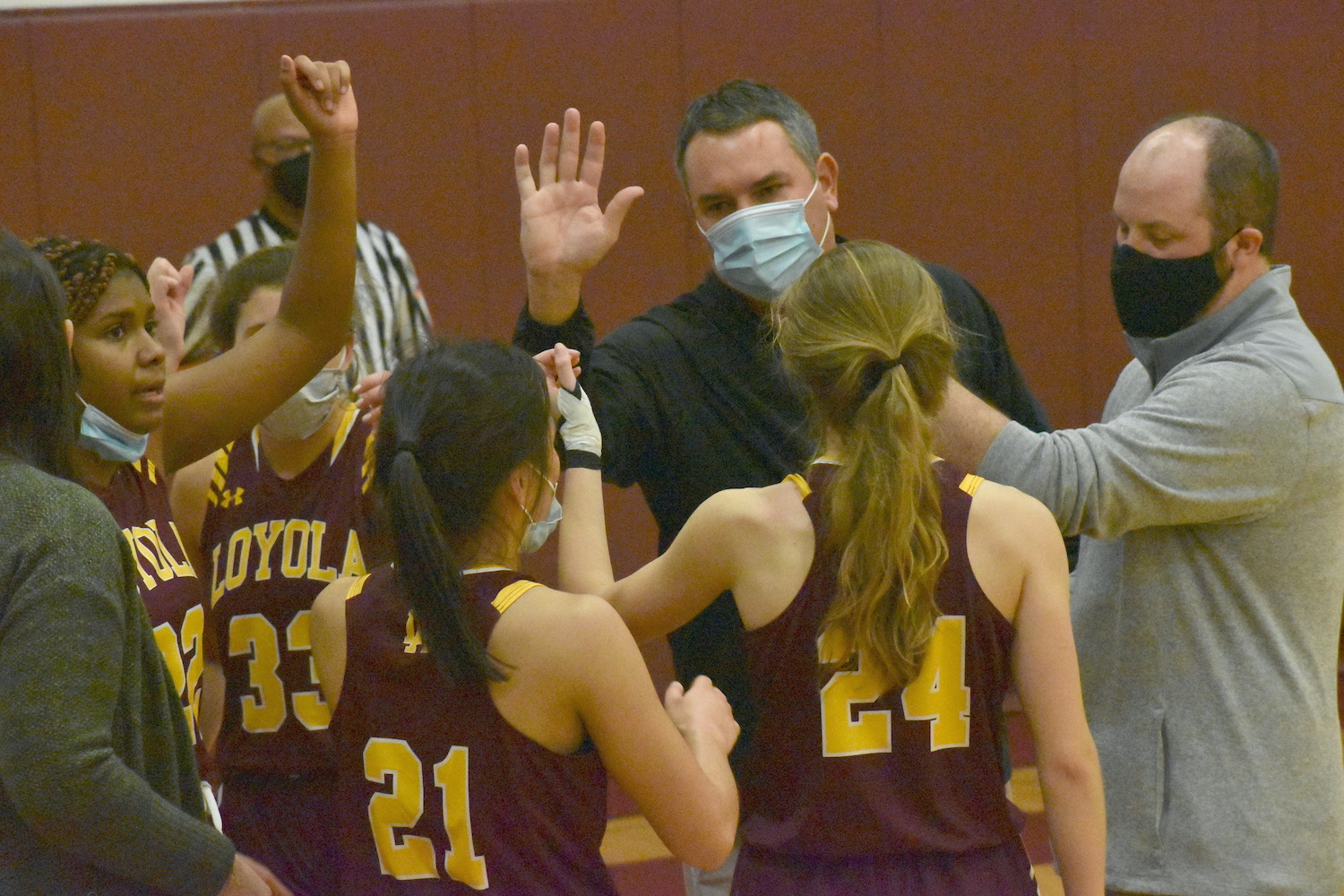 Amid the state’s strict COVID-19 restrictions, the chances for an Illinois high school basketball season were slim and she wasn’t the only one thinking bad thoughts.

“I was slowly losing hope,” Scarsella said. “That last week? Nope, it did not look good.”

But just over two weeks later, here the Ramblers are, five games — and five wins — into an unexpected season that most recently featured a 47-38 road win Saturday, Feb. 13, at Montini Catholic in Lombard.

It was the Ramblers’ fifth game in six days, part of a restless six-week slate designed by coach Jeremy Schoenecker on behalf of his senior-heavy roster.

“We wanted our seniors really to get the most out of these six weeks,” he said, “and that’s why we’re trying to play as many games as we can.”

And no rest for the weary, as Loyola welcomes Marian Catholic Sunday, Feb. 14, before visiting Evanston on Monday, Feb. 15.

Scarsella admits the constant competition is a “shock” to her body, but bring it on.

“The body is a little in shock,” she smiled, “but otherwise, I get to get out there with these girls who have been really, really looking forward to this season and so it really feels great to go out there one last time before we all go our separate ways in college.

“I’m just super, super grateful for the opportunity and we are here to make the most of it.”

Mission accomplished so far, as the Ramblers, whose five starting seniors are all playing basketball in college, took down the new-look Broncos for the second time in three days.

On Saturday, Montini threw a new zone defense at Loyola, which fought to find a rhythm for one and a half quarters.

With the Broncos up 14-11 in the second quarter, a five-point run by Scarsella (Loras College) got the Ramblers going. It was followed by a driving layup by Arielle Dabu (13 points; Florida Southern) and three at the buzzer by Nyah Moore (Case Western).

Schoenecker made some adjustments at halftime to free up his front-court stars, Summer Parker-Hall (Cornell) and Isabella Ogliore (DePauw).

The changes loosened up the Loyola offense.

“(Montini) went to like a 1-2-2 matchup zone that they did not play against us the first time,” Schoenecker said about the start of the game. “It took a little bit of adjusting and talking with the girls about how we wanted to try to attack it. I thought we did a good job at halftime putting two things in: high-low sets and a special when we’re in the corner that keeps Summer in a solo post area.”

Parker-Hall (8 rebounds, 2 blocks) scored 6 of her 8 points in the third quarter, while Ogliore (5 points) grabbed 6 rebounds in the period.

With an eight-point lead, the Ramblers held serve until the Broncos cut the lead to six with four minutes to go.

After a pair of Parker-Hall free throws, Scarsella got open and buried a dagger 3-pointer, her third of the night, before exploding in celebration as her team’s lead become 11 points with three minutes to go.

“That three kind of sealed the deal,” Scarsella said. “I’m a passionate person. … It was open, we ran the play correctly, like coach said. We’d been struggling with that throughout the game, so it was a pretty big moment.”

Dabu added a final layup, and the Ramblers were 8 for 8 from the free-throw line in the final quarter and 16 of 18 for the game.

Montini finished third in the IHSA Class 3A tournament last season, but has a completely new look after longtime coach Jason Nichols stepped down and a number of players transferred, including four 2020 starters, such as Angelia Giordano, who now attends Loyola but must sit out this season.

“These are games where everybody knows everybody. We’re not going to blow anybody out,” Schoenecker said. “They are gonna be nail-biters and I think that is just part of being in the (Girls Catholic Athletic Conference) Red. It’s very competitive, but I’m proud of the girls.”