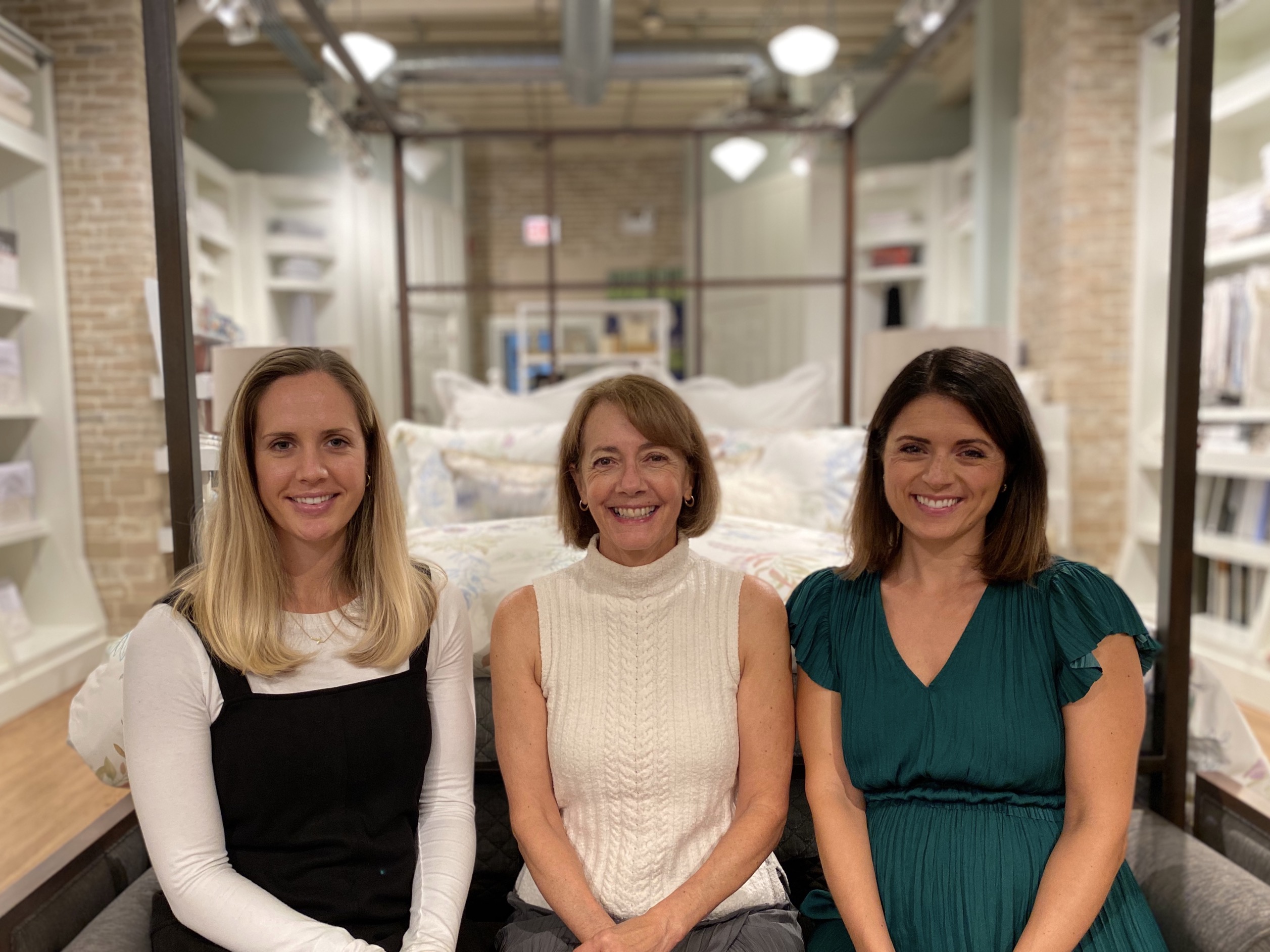 Meg Carroll (center), president of Bedside Manor, and her daughters Kathleen (left) and Annie (right), are celebrating 35 years in business and 25 in Winnetka. | Photo submitted.

Meg and Michael Carroll don’t waste time fretting over the reality that the survival rate of family-owned businesses dwindles after two decades.

Rather, as the owners of Bedside Manor in Winnetka for the past 25 years, they subscribe to the theory most famously advanced by Albert Schweitzer: “If you love what you are doing, you will be successful.”

“Our work is part of our life and has been forever,” said Meg, a 1973 New Trier High school graduate. “Our kids grew up around the kitchen table hearing us talk about it. It has always been a part of our whole being.”

The company’s growth to the point where it has long been considered the North Shore’s premier bath and bedding boutique began — as have many successful businesses — with an informed hunch, a different spin and guts.

Meg, alongside her former business partner and college roommate, opened the first Bedside Manor store in Long Grove in 1985. In the beginning, they focused primarily on brass beds and Amish quilts, but quickly saw that European linens were an emerging draw.

“People would go to Europe and they would experience the beautiful linens. They were unique and weren’t really distributed in the U.S.,” Meg said.

Soon, Bedside Manor was one of the nation’s pioneer boutiques bringing European linens to the United States.

Meg’s husband, Michael, joined the company’s executive team as secretary when they opened their second location in Lincoln Park.

In 1995, they opened another store, this time In the Hubbard Woods Design District of Winnetka at 920 Green Bay Road.

“We asked ourselves, do we want to look for a bigger location in the city, or do we feel the market would bear multiple locations?,” Meg said. “We liked the boutique feel and the level of customer service that we were able to provide so we decided to open in more places.”

The decision to land in Winnetka was an easy one, she said.

“I grew up in Wilmette and went to Sears (School in Kenilworth) and New Trier. It was a natural place to land,” she said.

Shortly after opening, she was happy to see that many of her Chicago customers were moving north from the city along with their growing families and were now customers locally.

The store, which measures a bit over 2,000 square feet, features a large display of some of their top furniture brands as well as master bedroom vignettes that “show a true representation of what we offer and what we carry,” Meg said.

“We have so many different vendors that we carry and represent, that we are able to match up the look our customers want and the quality they want and also the price they want,” she added. “We have a very broad range of price and look.”

As Meg and Michael put it on the website, “Bedside Manor has been providing customers with the inspiration to create bedding ensembles that make a house feel like a home, bath luxuries that titillate the senses, and furniture pieces that tell story.”

The quality of the company’s “design associates” is a major reason for the company’s success, Meg said, saying “they know the market and they know what they are talking about.”

The Winnekta store manager has been there 20 years, and one of the design associates 12 years. They have long-standing relationships with their vendors. And they know their customers.

“We just have such a great, loyal customer following,” Meg said. “They love coming into the store.”

One thing that differentiates Bedside Manor from the department stores is that they “like to personalize the look.”

That could be as simple as changing the sheets. Or as complex as designing one-of-a-kind rooms tailored to a client’s specific needs. But despite the potential complexity, Beside Manor prides itself on originality.

“We are a true specialty store. We specialize in what we do,” Meg said.

Meg is particularly proud that Bedside Manor has become a family affair.

Their daughters Annie and Kathleen, both raised in Wilmette and graduates of Loyola Academy, now work for the company. Kathleen joined the team to bring a fresh eye to Bedside Manor’s marketing and advertising and spends some of her time in the Winnetka store. Annie has expanded the company’s e-commerce business.

“Working with them has been indescribably great,” Meg said. “It’s really great having young minds. It is a whole new energy.“

COVID has temporarily caused some staff cutbacks and reduced hours, but “so far, so good,” she said.

“People are spending more time at home, and realizing maybe they might want to do some freshening up,” Meg said. “We are so appreciative of our loyal clientele. We thank them, and we want them to keep coming in.”

To help celebrate its 35 years in business, and 25 in Winnetka, Bedside Manor gave away a $2,000 complete bedding set to a lucky customer at each of their locations in Winnetka, Chicago and Lake Forest.