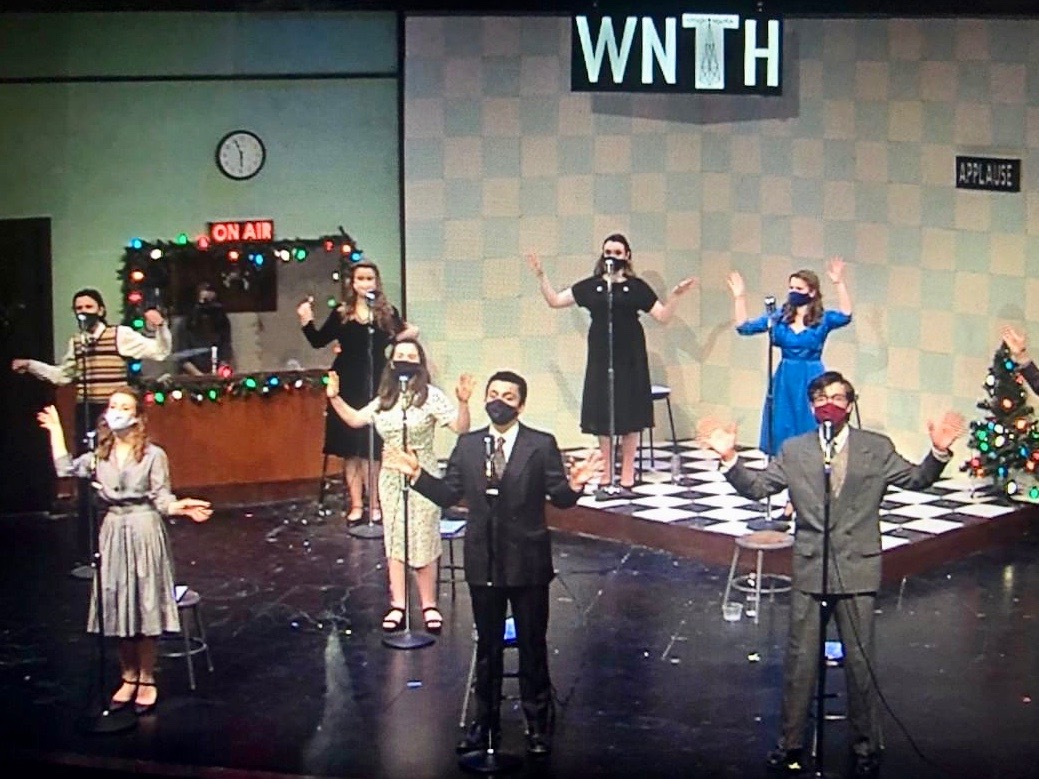 With themes and motifs reflective of this year, “It’s a Wonderful Life” is a fitting story to be told in 2020.

New Trier High School students will bring the signature holiday tale to life this month through their radio broadcast-style production of “It’s a Wonderful Life: A Live Radio Play.”

“It’s a Wonderful Life” tells the tale of George Bailey,  a down-on-his-luck man who finds meaning through seeing how he’s helped his community and family.

In addition to fitting a tonal theme that mirrors how people are feeling this year, the production was also chosen because it allowed students to be socially distanced while rehearsing and performing, as it centers on the radio production of the story.

Audiences will view the cast play the roles within the story, as well as the roles of people putting on a live radio broadcast.

“The viewing audience is the in-studio audience during a live, on-air presentation of the script,” said Hilerre Kirsch, a music and theater teacher at the school and the director of the production. “It’s meant to be played live in a theater, it’s written as a radio play being presented by the actors in a live studio. It’s like TV shows that have a live studio audience.”

Kirsch said it was a challenge to identify productions that would work this year but she believes this production is a near-perfect fit.

Unlike other productions at New Trier High School, this one won’t be seen live in a theater, instead it’s being made available for free on Broadway On Demand (get.broadwayondemand.com) from Dec. 16-18. It will also be played on-air at WNTH, New Trier’s official radio station, at 7 p.m. Dec. 22-24.

Information on setting up a free Broadway On Demand account can be found on New Trier’s performing arts department’s website, newtrier.k12.il.us/PerformingArts.

Because the play is being presented as a radio production, students focused less on stage work and choreography and more on learning skills like voice acting and foley, a practice specializing in the creation of sound effects.

“I think we’re so used to moving around the stage and memorizing our blocking and having those connections with people face-to-face,” New Trier senior and cast member Julie Oelerich said. “Although we were able to still keep some of those elements, a lot of it was more focused on our vocal tones and the varieties of voices that we had to do throughout the production, as opposed to engaging our whole body the whole time.”

A vast majority of the rehearsals were held over Zoom but despite the web conferencing software’s ability to virtually connect people, challenges during production still came up.

At one point during in-person rehearsals, Kirsch was exposed to someone who tested positive for COVID-19, and had to quarantine for 14 days while her students continued to rehearse the production. To get around this, she would be on Zoom with New Trier senior Paul Graham, who served as the production’s stage manager, watching the students rehearse virtually.

“She would tell me if she didn’t like something the actors did I would have to stop, tell them to correct it and run it again, which is not usually the stage manager’s job in a New Trier production,” Graham said. “The director would stop them themselves and give them better directions, but those directions had to go through me because she wasn’t there.”

Graham said this was his third production where he took on the role of stage manager, and he’s been participating in theatre at New Trier since his freshman year. His role led him to coordinating all of the technical parts of the production with the acting, which presented its own unique challenges with social-distancing requirements.

Above all, the participants were just happy that even during a pandemic they were able to find a way to safely come together and create a production that they’re proud of.

“When I found out there was actually going to be a play, I didn’t care what position I got because I was just so excited to be in this environment again, which gives me so much comfort and some form of normality,” Graham said.

Stage manager and light board operator