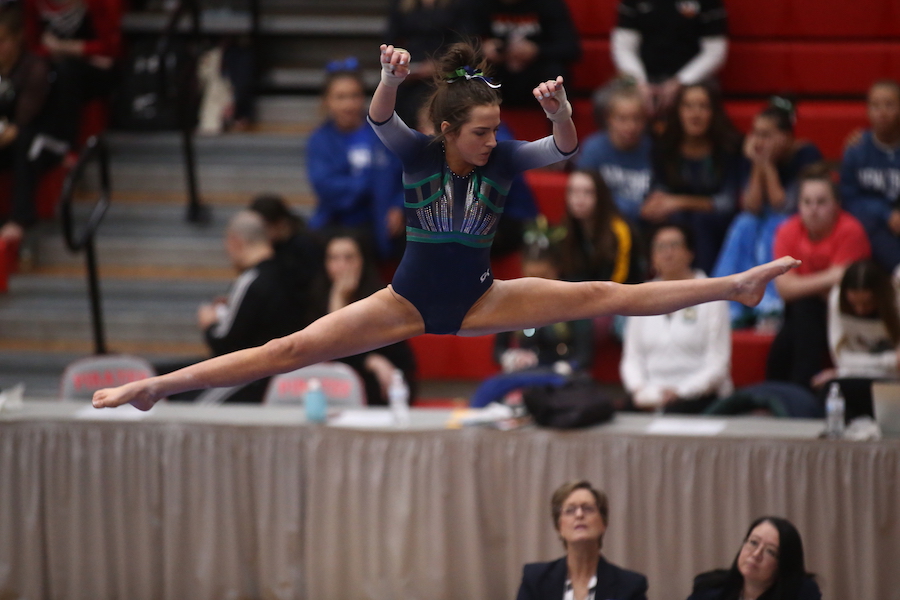 New Trier's Amelia Montgomery competes at state last year, a performance upon which she hopes to improve but doesn't know if she'll get the chance. | Photo by Carlos Alvarez

That is all Amelia Montgomery is asking for: one more meet.

One final chance for vindication, or maybe for self-preservation. Whatever the outcome, she thinks she and her fellow New Trier gymnasts — as well as student-athletes across Illinois — deserve it.

“Last year at state, in my bars routine, I tried a new dismount and fell,” said Montgomery, a senior captain for the Trevians. “My biggest goal is I just want to hit one routine, especially on bars. That’s my favorite event. As of now, I ended at the state meet with a fall. One of my goals is to stick a routine, and I don’t know if I’ll get a chance to do that.”

Montgomery, who will not compete athletically in college, is one of thousands of Illinois student-athletes who feel the same way, and every day, the odds to realize those opportunities seem to worsen.

The latest backstep came Tuesday, Nov. 17, when Gov. J.B. Pritzker announced COVID-19 mitigation measures that include an indefinite pause on all indoor sports and recreation as of Friday, Nov. 20, quashing the chances of a pre-holidays start for high school winter sports.

The possibility of a 2021 restart is planned but uncertain, as the dangerous spread of COVID-19 continues to guide statewide decisions.

In response to Pritzker’s announcement, the IHSA said it continues “plotting out potential paths” to competition in 2021, but a lot of roadblocks — outside of just COVID-19 — stand in the way.

With three fall sports (football, girls volleyball and boys soccer) getting pushed to the spring, a logistical nightmare looms, as schools will have to manage the scheduling, busing, hosting and more of up to 25 sports as well as a number of activities in a half-year.

“They are just anxious,” Runkle said of his student-athletes. “Just not knowing is tough for them.  …  The bombardment of information we are getting is tough. If I read another email, I might cry. In a pandemic, there are so many questions. It’s changing all the time.”

Runkle said it was special to have his team back in the pool together this week. And now, once again, he doesn’t know the next time that can happen.

He feels for his athletes, both in and out of the classroom, as they process the new normal. Runkle, a health teacher, said he had one student in his classroom Wednesday and 28 on a computer screen.

Still, he understands why.

“For as much as we want to be (together), we look at the news and see what’s going on,” Runkle said. “It’s a conflicting feeling. What are we gonna do to get past this? We all need to do our part. It hurts on the front end, but will probably be worth it on the back end when we get through this thing.”

Unlike fellow winter sports basketball and wrestling, both considered high-risk by the state and already pushed to spring and summer respectively, swimming is low-risk, and the girls program just completed a shortened season in October, as did other noncontact sports, like golf and cross country.

That makes the decision to push all sports that much harder to swallow for participants in other low-risk sports like gymnastics, bowling, cheerleading and dance.

New Trier girls gymnastics coach Jen Pistorius fully expected to have some sort of season. Now, she’s not sure.

“We always thought because we’re pretty much an individual sport — the girls compete by themselves, there’s no contact — we would be fine to have an adaptive season,” she said. “When getting text messages on Tuesday, I kinda knew something was gonna happen and braced the girls. I think everybody was pretty much shocked. I thought we were kinda in the clear.”

Pistorius and Runkle both will work with their student-athletes virtually and maintain the team’s focus as if a season were inevitable.

Despite the current disappointment, they both remain optimistic that the IHSA and school athletic directors — New Trier’s AD Augie Fontanetta is on the IHSA Board of Directors — will fight to make it happen.

“It’s just another blow to all these kids. It was a little bit of normalcy they could have, interacting with friends they have not been able to see,” Pistorius said. “It’s a huge blow to everybody. They are pretty upset, as they rightfully should be, but we’re really hopeful.

“Talking to some other coaches and administrators, we’re hopeful we come back after the holidays. They are hopeful, which gives me hope.”

Amelia Montgomery is clinging to that hope, too, but it’s fleeting.

She can’t help but think of the spring, when the three-time state qualifier didn’t see a gym for three months during the state’s stay-at-home order.

COVID-19 again surged across the state in October and early November, and with the holidays approaching, Montgomery wonders if relief will ever come. She’s doing her best to fight that thought.

“Hopefully we come back in January and get back into it,” she said. “I don’t know how it is going to play out. I think our athletic director is going to do his best to get us as much of a season as possible. I’m trying to be optimistic: at least one meet — maybe two.”