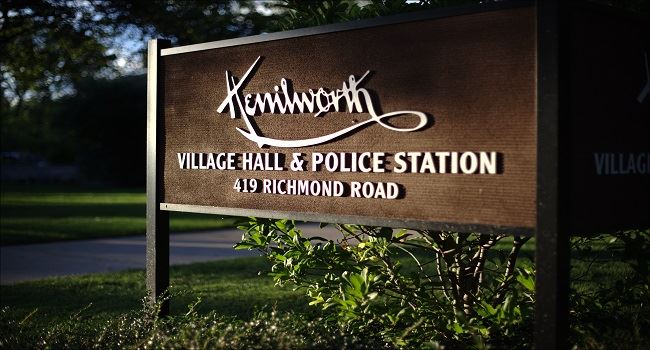 The pressure is on the Village of Kenilworth.

Included in the village’s 2021 budget is an $8 million funding puzzle, but instead of removing the item for future consideration, the board approved the budget in its entirety Monday, Nov. 16, with confidence that a sense of urgency will help solve the puzzle.

“I like the concept of having it in, keeping the pressure on,” Trustee Tim Ransford said at the board meeting. “Taking it out and saying we can look next year leaves a temptation to look at it in September or October. … Let’s go, do some work now and get at it.”

The village is not in the dark, however; there are funding options and contingencies.

The project is a portion of Phase II of the Kenilworth 2023 Infrastructure Improvement Program, which launched in 2018 to provide stormwater relief and increased fire-hydrant pressure throughout the village.

The second phase aims to alleviate flooding along Raleigh, Leicester and Warwick roads. It began in 2020, but, like other Kenilworth capital projects, was delayed because gathering public feedback became more difficult amid COVID-19.

He hopes to seek bids on the project in January.

Trustees discussed removing the item from the budget and pushing it back in when more pieces were in place.

Brennan warned that doing so to such a high-profile project may irritate residents who have kept a close eye on the work.

The board reached a consensus to leave it in the budget and prepare more discussion for the December Committee of the Whole meeting.

The most important piece of the puzzle, Brennan said, is the funding from the MWRD, from whom he hopes to hear back this month.

The approved project is just one capital expense in the Village’s 2021 budget. Others include:

Also in 2021, the village plans to ink a new multi-year agreement for refuse and recycling collection to replace the current contact that ends April 30, 2021; develop a streetscape master plan for the town’s commercial district, a lakefront master planning process focusing on shoreline protection and recreation, and a marketing plan for both business and residential life in Kenilworth; and review both the paused Green Bay Road Corridor Plan and the building permit process in search of efficiencies.

On the operational side, however, the Village presented a balanced budget, which projects a $46,483 surplus in General Funds by year’s end.

The Village plans to collect slightly under $4.4 million in General Funds and spend $4.35 million, with two-thirds of that, or $2.88 million, funding Public Safety.

The revenues represent a $164,112 decrease from the 2020 budget. The Village of Kenilworth has not collected less than $4.4 million in revenue since 2011.

“The revenue decrease is due to a number of factors including the timing of tax levy receipts, shifting the Sewer Fund transfer to a direct-charge method, and reduced investment income,” village documents read.

The Village also made special note of its police pension liabilities in the budget proposal.

Other items of note in Kenilworth’s approved budget:

• 2 percent staff increases are included for employees not on a step-raise union (IMRF) plan, effective in May 2021.

• The police department will purchase an automated license-plate reader system for an estimated $35,000.